Hizbullah Secretary General His Eminence Sayyed Hassan Nasrallah assured that "discipline and duty of the Hizbullah resistance fighters is one of the reasons behind the 2006 July victory." His Eminence explained the reason of this divine victory was neglecting the temptations of this world, and seeking the afterlife through attaining martyrdom for the sake of God the Almighty.

On the fifth night during the ceremony held in Sayyed Al Shuhada complex, Hizbullah Secretary General referred to the battles of Ohod and Badr (in the Islamic history) extracting lessons from which one should benefit in order to reach the sublime goal of pleasing God, and achieving victory.

Sayyed Nasrallah said the two names "Zeinab and Hussein" were of the elements of patience during and after the July war. Zeinab and her brother Imam Hussein are the heroes of the Karbala school. Sayyed Nasrallah revealed that "After the July war, some foreign study centers and scientific institutions conducted a study on the Lebanese people who suffered the repercussions of the war, as houses and shops were destroyed civilians killed including children, with more than one million people displaced from their homes.This war ended by their (the people's) victory.

Sayyed added that although the Lebanese emerged victorious, many people lost their lives and "faced big threats and conspiracies," he noted "We are seeing this in WikiLeaks day after day and we will see greater" plots.

Hizbullah Secretary General went on "True, there was a lot pain, but there was also endurance, there was the ability to overcome this pain and endure the past, just like there is a process of building the future." He added that the researchers found out that the two most common names among the enduring people were Zeinab and Hussein.

Sayyed noted that those people were inflicted with a great calamity, especially that wars usually increase the risk of social breakdowns, psychological traumas, and increase corruption. He said "the researchers were amazed to see that the people were patient and enduring, returned to their homes despite all the destruction, rebuilt their homes and villages, and were able to deal with the situation without any trouble."

Hizbullah Secretary General concluded that Karbala has turned into a paradigm, of course on the broader Islamic level, which means faith in God and the afterlife. Sayyed explained that these are the teachings of Imam Hussein and Zeinab, and that is why there exists patience and endurance in face of calamities and hardships. 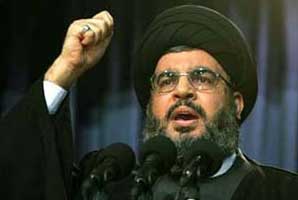