A blaze flashed in the sky. It's eight o'clock in the evening. A third day ended with uneasiness. Death was pouring like lava from the air, the sea, and all directions... and people's hearts were in their throats. 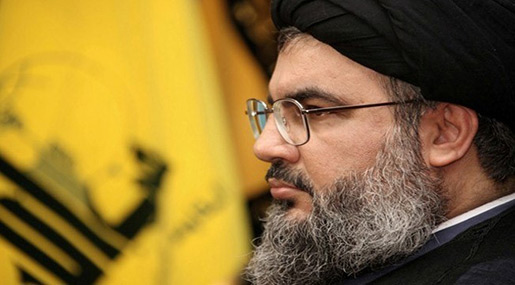 This is the southern suburb of Beirut. A flash was spotted from the airport perimeter, like a genie coming out of the bottle, frisking high, and then flying away.

It is the historic missile. Some had the chance to see what happened that night and in that moment while listening to Sayyed Hassan Nasrallah's phone call to Al-Manar TV. It was a live broadcast. Now and here: «the surprises that I promised you will start from now. Now, in the middle of the sea, facing Beirut, the "Israeli" military warship, which attacked our infrastructure, destroyed people's homes, and attacked civilians, look at it burn. And it will sink with dozens of Zionist "Israeli" soldiers. This is the beginning. Until the end, we have long talks and a date».

That was ten years ago. Most residents of the [Beirut] suburbs did not even leave their homes yet. Takbeers [chants of God is Great], chants, prayers and songs burst out the windows. Voices filled with enthusiasm and rage. Voices that had been suppressed for three days now exploded with pride.

Many people went onto the streets. Why not? Don't ask. «Adrenaline» has something to do with that. They were looking at each other's faces. We are fine. We are not dead. The "Israeli" warship was hit, we will resist, this is it, Sayyed promised us: «we are going to an open war and victory is coming ...».

Each of Nasrallah's television appearances and media statements during the 33 days will be like a «strategic weapon» which exhausted the "Israelis"; the «balance breaking» weapon which was not theirs to use. Nine televised speeches for Sayyed, one interview with a satellite TV channel, and another with a newspaper, all worthy of an «awareness battle» resolved in favor of the resistance. This along with battles on the ground and rockets that reached beyond Haifa in a war that will be deeply engraved into the "Israeli" consciousness. They remember it as... «Lebanon's Second War».

Later on and within the framework of the «Winograd» Commission inquiry into the outcome of the war, Shimon Peres, the only remaining "Israeli" icon, will say: «the war included a massive psychological defeat, and this defeat resulted from Hizbullah taking pride in its efficient spokesperson and secretary general Hassan Nasrallah». The «Nobel Peace» prize winner and architect of the first Qana massacre adds, with much objectivity and clarity: «words in war are also bombs. We also had a choir. We have a lot of people who speak, but none of them were great speakers, they do not know how to interpret things». Peres must know Demosthenes, the great orator of Athens, who led the war of words against Alexander the Great and his father Philip [of Macedonia] giving his people tremendous morale... but his [Demosthenes'] country was defeated in the end. Peres knows Nasrallah has not been defeated, and that he was not only an orator of the war, but also a political leader, who knew how not to lose. At the same time, he [Nasrallah] is the top military leader in his party. Three qualities in one man, in the darkest existential moment. History hardly knew such a model. The likes of Peres knows this.

We are not talking about a limited "Israeli" response to the kidnapping of the two ["Israeli"] soldiers (Operation Truthful Promise). This became clear to everyone. It's the war. Beirut's southern suburbs were unprecedentedly flattened. The South [of Lebanon], the Bekaa, the mountain, and the north, all of Lebanon, came under bombardment, and the body count was rising. As part of their «propaganda» war, some mainstream media outlets reported that Sayyed was wounded. We are now at the end of the fifth day of the war. If you lived the horrors of that night and you remained conscious, you wouldn't want to see the anxious faces during that time no matter where you looked. Where are you Sayyed? Aren't you going to address us again? Where are you O' our beloved, may my parents be yours and the resistance's ransom [be sacrificed]. This was the people's state of mind at the time. It was the truth and not a myth that all of them yearned for Sayyed.

They, the people who were displaced to «safe» areas and those who stayed in schools and at public gardens [the Sanaye' garden, for example], yearned for that man. The breaking news bar at the bottom of the screen of «Al-Manar» read: Sayyed will address you shortly. Sayyed is fine. It's all over. Some had a smile of relief on their faces. But wait. In this appearance, Sayyed's face was not how we remember it. It seemed pale. Later it emerged that a technical error was the issue. A lighting problem. This will be proven three days later in a satellite television interview with Ghassan Ben Jeddo. In his last address in the last day of the war, Sayyed promised the people that the destroyed houses will be rebuilt. But you find that promise in his second address during the first few days of the war: «once again I tell you, with your support, embrace, love, and thanks to you and your steadfastness we will prevail. The buildings and places that are being destroyed, we will cooperate; surely we are determined to be serious in rebuilding what was destroyed. Do not worry. We only wish for the wounded to be healed and long lives, well-being, and safety for the living. It is important that we stand our ground now and emerge from this battle victorious».

A lady in her sixties, without any prior preparation and in a spontaneous interview with a correspondent in the heart of the suburb [Dahye], standing while smoke was still rising from the remains of her home, crying out loud: «God willing, Sayyed Hassan will remain the crown, holding up our head with him, he made the whole nation proud ... Look, despite all that has happened. Isn't my house here gone? It's a sacrifice for the sake of the resistance. My house in the village is also gone, it is also a sacrifice for the sake of the resistance». That phrase is now used as an example. That was the phrase of the late Mrs. Kemle Samhat. It is impossible to disregard that phrase when writing the history of this war. Thus, a harmony of a special kind was created between Sayyed and the people, continuing until the last day ... And that is what the "Israelis" monitored closely. This will be shown later in the «Winograd» Commission inquiry again. A member of the "Israeli" Security Cabinet which ran the war, Eli Yishai, will say in his testimony: «I've noticed two wars at the same time. A Military war and a psychological war. Hizbullah has managed the psychological war successfully despite the lack of comparison between its capabilities and ours. "Israel" failed in its media performance during the war, and left the podium for the enemy. Not a day went by without Nasrallah devastating our morale and nerve wrecking us, saying "Israel" will be defeated, "Israel" will be defeated».

More than 23 centuries ago, Demosthenes addressed the people of Athens, saying: «but if anyone here, Athenians, is inclined to think Philip too formidable, having regard to the extent of his existing resources and to our loss of all our strongholds, he is indeed right. ... If, therefore, Philip had then come to the conclusion that it was a difficult task to fight the Athenians while they held such strong outposts in his own territory and he was destitute of allies, in that case he would never have gained his present successes, never acquired his present power. But, men of Athens, Philip saw clearly that all these outposts were but the open prizes of war, that by natural right the property of the absent belongs to those who are on the spot, and the property of the careless to those who can face toil and danger». Demosthenes had a lisp, Nasrallah has a lisp too. The former is one of the most famous orators in history, but in the end, he is just a preacher. The latter, however, was given the gift of speech, but he is more than that. Demosthenes's enemy succeeded in exiling him out of the country after defeat. Nasrallah's enemy wanted exactly that, but failed. Nasrallah was not defeated. The resistance was not defeated. Here is the full story. A decade has gone... but history would remain.