"Sunny", "resistant". "the suburb of dignity". Name it as such or with other related terms. It is the introduction when speaking about the resistance, and the details of every event. It is the conjunction [that which induces sympathy] with regards to shedding tears for the martyrs, and moreover, the alphabet when speaking about patience. 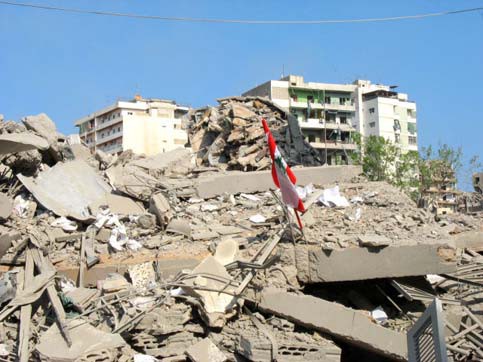 It is the suburb hugging the sea, under the eyes of the mountain, touching by its edges the heart of Beirut. It is affectionate to her citizens and strangers, which doesn't deny or renounce anyone. It is the city which is faithful to her children when they leave their homes in the mornings, some of whom return back proud, basking in glory and achievements, while others return in coffins that tell stories of heroes who were here.. then passed away.

The people of Dahyieh own tales of martyrdom, ever since the Zionist enemy burned the fires of its hatred and anger at their homes during the July 2006 aggression. In every house there is a story that is told from a mother or father, and sometimes, a son and daughter.

One day of July, a safe neighbourhood woke up to the roar of the warplanes and the sound of rockets. Whole complexes were flattened, the temperature of the skies increased. Some were able to leave in a hurry, while others didn't have time, so they were raised as martyrs at the very beginning of this aggression.

All those who left to surrounding areas, whether near or far, used to return back whenever they get the chance. Some were trying to search for memories in the remnants of neighbourhoods and destroyed homes. Others were attached to a photograph during the moment of tragedy. Some of them used to return back to shed tears when hearing about a martyr from their family and relatives. Despite all of this, nothing changed their souls, although a lot changed the positions of stone.

Haj Abu Hussein was in the south when the Israeli aggression began. The seventy-year-old man used to spend summer days in his hometown "Al Khiam", to come back to spend winter days in his apartment opposite the Al-Qaem Complex located in Hay Al-Abyad. From "Al Khiam" he headed to Beqaa where he was a guest in a friend's place. He suffered with his family while moving on endangered roads, and throughout his journey he was thinking constantly about his home in the Dahyieh, because it was full of memories, it resembled the harvests of his life, and it is the place where he raised his six sons.

He had no time to return back, and whenever he heard about the targeting of the area around "Al-Qaem" his heartbeat used to increase, until hearing that one of the neighbourhood buildings collapsed. At that time, he was shocked and remained silent. He whispered secretly: "thank God, the damage of stones is better than the damage of health", which he kept repeating. He remained confused, until one of his neighbours called him saying: "O' Haj, it is not our building that has been destroyed, it is the one next to it."

Today, Abu Hussein is sitting on his apartment's balcony in "Hay Al-Abyad", remembering days he doesn't like to repeat.

"But what shall we do if "Israel" used to attack us? We will bear and endure, and will stay always on the side of the resistance, as it was on our side." He said painfully: "what has passed from our age is more than what is coming."

In Haret Hreik, the scene doesn't seem different, there are similar features... most of the flags are yellow and black. Many people remember the war and its tragedies. Some refuse to talk about it, escaping from the shedding of tears that could embarrass them, while with others you can witness the bewilderment in their eyes when asked: what if the July war is repeated again?

It seems for a moment that this question is as big as a mountain, especially when thinking about the destination they will choose if they decided to leave the Dahyieh, the target of "Israeli" treachery. They are the ones who are paying the price, through the blood of martyrs who are slaughtered while facing Takfiri terrorism in Syria. The photographs of these martyrs are being added to the July War's martyrs. They are the ones who are forming military and security barriers over all the entrances of the southern suburbs, fearing the execution of new terrorist suicide bombings.

Mohammad Musa gathers himself. He sits on his chair in a small popular café on Sayyed Hadi Nasrallah Highway, and says: "We will remain in our homes and will never leave them, and if a [new] war is imposed on us, then we will be alongside the resistance". Yet despite this, he speaks this time about escaping not to Beirut, which he lived in throughout the days of the 2006 aggression, but rather to Europe, "as migration remains one of the existing choices if we were able to do so."

Mohammad speaks about the first days of the war: "I went down to the Deep Hotel (Beirut) yet I would return to Hareit Hreik every day to visit my apartment which remained standing until the last day of the war. On that day I felt naked when our building was destroyed...where will I go? A question that filled my mind until I settled into my aunty's place, and the surprising thing is that I remained in her house for 6 years, as the rebuilding of our building took longer than expected, and when we returned to our apartment, its size was reduced by half of one of our rooms. Despite that, two points must be separated from each other: the resistance, in the form of the men who fight to defend us, whom who do not see or know. And between those whom we see every day and who follow up our issues after the problems are over."

Those affected are directing criticisms to the discrepancies in the compensations which the affected received from the war, despite the passing by of 10 years from those sufferings. Hassan clarifies: "We support the resistance because it defends our land and sanctities, and on this basis we do not judge it due to the actions of some, due to what our consciences dictate upon us in supporting those young men who are giving us from their blood for the sake of our security and peace."

In the Imam Hassan Complex, the eight constructions that were targeted during the July aggression appear relatively new. After being one unified complex, it was rebuilt into two sections, each of which includes four buildings. The people of this area are busy with their daily works after years following the disappearance of black clouds of hatred. Within the Complex many martyrs fell whom their families still remember them, out of pain and worry for the future....they prefer to lock the door of painful memories within small spaces the size of the sea.

The memories differ between a dear one who has passed away, and one whose harvest of life was burnt, but what all the suburb's citizens agree upon is that whatever the type of aggression, even if imposed, and whenever it is, the slogan of will always be: "martyrdom, and never humiliation".