According to a report prepared by the "‘Israeli' propaganda committee during the Second Lebanon War" and developed by a secondary body of the Foreign and Security Committee Specialized in Publicity and Foreign Relations (2007), "Israel" failed to face up to the intense propaganda campaign carried out by Hizbullah's Secretary General Sayyed Hassan Nasrallah during the [2006] war. The findings also concluded that the "Israeli" campaign did not succeeded in winning over the "Israeli" public but rather increased its confusion. 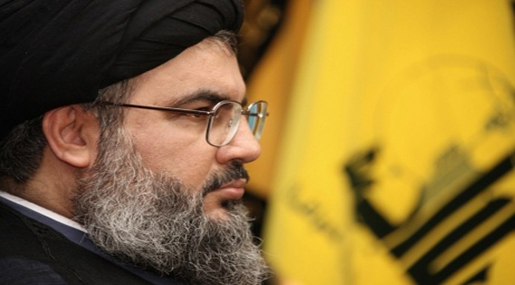 Perhaps the tight security measures are the reason why we now only see the Secretary-General of Hizbullah Sayyed Hassan Nasrallah on TV screens. Despite the absence of his bodyguards, Sayyed Nasrallah does not appear alone on the screen. His shadow bodyguard, which has become an inseparable part of his aura and appearance, always accompanies him. This was part of the psychological warfare, which has become synonymous with his name to the extent that he became known as the "father of psychological warfare" first and foremost to his enemies and foes as well as his supporters.

According to his enemies who recognize his characteristics, Sayyed Nasrallah has "microscopic capabilities" because of the large and deep impact of his words and promises not only to his followers and supporters as well as the supporters of resistance ideology in the Arab world and the West but also to the "Israeli" settlers who keenly follow his speeches.

Perhaps one of the reasons Sayyed Nasrallah gets airtime on "Israeli" screens - with speeches broadcast in their original format with no adjustments during the ["Israeli"] aggression of July 2006 - is the "credibility strategy" he follows, according to the Maariv newspaper. This propaganda mechanism has been used since World War II, originally founded by advocates of the Allies against the Japanese. The former was keen on transferring messages based on real content so that the recipient could sense the credibility of these messages.

The report, published on the Yedioth Ahronoth website, also added "the last war revealed a large gap between Hizbullah's propaganda campaign [and that of the "Israelis". Hizbullah's propaganda campaign] included only one spokesperson, Hassan Nasrallah, coherence of information, and a speedy transfer of publicity messages. Meanwhile, the "Israeli" campaign was carried out by several speakers that lacked coordination and understanding amongst themselves. These speakers contradicted one another, made mistakes, and projected an overwhelming sense of optimism that confused and frustrated the public."

Moreover, with respect to the momentum of the psychological warfare led by the Secretary General of Hizbullah, one of the presenters on an "Israeli" Channel 10 talk show "London et Kirshenbaum" openly says "for God's sake, if we were not in a situation of hostility and war with Nasrallah, wouldn't we then be the supporters of his understanding of democracy. Some may interpret what I said to mean that I am an extremist, but we must make sure that we saw Hassan Nasrallah, a character that reflects an unusually balanced human being, a man deep in his understanding and great with his thoughts and following up with matters and developments, a rational and logical man. Yes, it is natural that we do not know everything. That said, it also can be argued that he is probably right."

Antoine Shalhat, a researcher in "Israeli" affairs, points out in his article published in March 2007 that the "Israeli" war on Lebanon in the summer of 2006 left many files that are still wide open. Perhaps one of the files attracting attention is that on the performance of the "Israeli" media in this war, which was undoubtedly considered the fiercest from a media standpoint compared to all the previous wars.

In his article, Shalhat quotes Audi Level, a senior lecturer in political psychology and army-media relations at the Ben-Gurion University, "A problematic mode arose. Instead of the "Israeli" public depending on one speaker from among themselves to inform them and explain to them the course of events of each day, the public had confidence in the leader of the enemy we are fighting." Level goes on to say that "to confront a leader who enjoys influence over the media such as Nasrallah, (the official "Israeli" institutions) should have responded on the same level at least." He adds that "a good media leader should provide the viewer with three basic aspects which are: credibility, certainty, and anticipation. Credibility is to tell the truth. Certainty is to portray reality from the field. Anticipation is waiting to hear its statements." Level affirms in the conclusion of his research that Nasrallah is still considered in the eyes of the "Israeli" public as a "character that generates inspiration and envy".

According to Haaretz, a very enthusiastic speech, charisma appealing even to the "Israeli" public, a vigorous follow-up, an active memory, and many other characteristics given to him by senior analysts, politicians, experts, and even the enemy's public, has created the first Arab leader who managed through his speeches thirty years ago, to have an impact on "Israeli" public opinion.

The following points to cracks in "Israeli" society, resulting from the impact of Sayyed Nasrallah's speeches and the lack of confidence of the ["Israeli"] public in their leaders who do not understand anything about psychological war and the development of consciousness, according to observers. So what kind of society is defeated by one individual's speech?