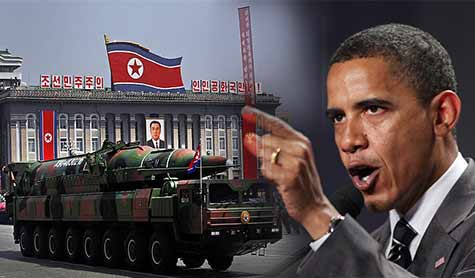 The two North Korean boats, which normally serve to keep fishing boats on the right side of the boundary, crossed "one nautical mile south" into South Korean waters, a defense ministry official said.

The pre-dawn incursion prompted a South Korean naval ship to fire several warning rounds, after which the two vessels retreated to the North side of the border.

The official said the patrol boats might have been chasing some Chinese crabbing boats fishing illegally in the area.
"Or the North might have wanted to check the South's military vigilance," he added.
The North does not officially recognize the Yellow Sea boundary, which was unilaterally drawn by the US-led United Nations forces after the 1950-53 Korean War.

The border has been the scene of brief but bloody naval clashes in 1999, 2002 and 2009.
Tensions are high on the Korean peninsula, with multiple indications that North Korea might be planning to carry out a fourth nuclear test.

The satellite images, taken just two days ago, showed additional activity at the Punggye-ri test site that is "probably related to preparations for a detonation," the institute said on its closely followed 38 North website.

Also visible were probable command and control vehicles intended to provide secure communications between the test site and other facilities.
The 38 North post noted that preparations for the test in February last year had peaked two or three days before detonation.

The withdrawal of all equipment, vehicles and personnel had occurred immediately before the blast.
The nuclear threat from Pyongyang will top Obama's agenda in South Korea, a key US regional ally which hosts a permanent deployment of 28,500 US troops.
"North Korea has engaged in provocative actions for the last several decades," Obama said in Tokyo on Thursday.

"It's been an irresponsible actor on the international stage for the last several decades," he added.

Earlier this week, Pyongyang slammed Obama's trip as a "dangerous" move that would escalate military tension and bring the "dark clouds of a nuclear arms race" over the Korean peninsula.
South Korea's defense ministry first suggested Tuesday that stepped-up activity at Punggye-ri indicated a fourth test might be in the pipeline.

However, ministry spokesman Kim Min-Seok also acknowledged it could be a "deception tactic" aimed at rattling a few cages in the region during Obama's tour.
"We are thinking of possibilities that the North may stage a surprise nuclear test or just pretend to stage a nuclear test," Kim said.

In a briefing for the foreign media on Thursday, a senior government official said the North had sealed a tunnel at the Punggye-ri site.