Iranian Foreign Minister Mohammed Javad Zarif stressed that his country "will hold on to all its rights and will not give up any of them." 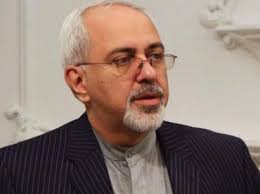 In an exclusive interview with al-Akhbar Lebanese daily during the 67th session of the UN General Assembly, Zarif stated that "Iran believes we are moving in the right direction over Syria. We are moving toward removing the chemical weapons and pushing a political process, which would end the bloodshed and herald negotiations."

He further explained: "The same time, the only way to convince the international community that Iran is not seeking to acquire nuclear weapons is the recognition of our right to peaceful and transparent [nuclear] activities inside Iranian territories, including enrichment."
In parallel, Zarif pointed out that the skilled scientists, technicians, and the technology we have in Iran could be utilized in a transparent manner under international supervision."
"Therefore, we are ready - not to give up our rights - but to exercise them in a manner that does not raise suspicion," he added.

Explaining the level of uranium enrichment reached in Iranian reactors, Zarif said, "These things are subject to negotiations. We do what Iran needs, what is requested in Iran, and we are ready to do it in coordination with the international community."
"They have to choose if they want to go in the direction of a realistic solution. We hope that the statements coming out of Washington, especially from President [Barack] Obama and Minister [John] Kerry, are headed in a positive direction. If this is so, we can go ahead and solve this issue quickly," he continued.
Moreover, Zarif mentioned that "there could be completed in three to six months if the right intentions are there. If there is a will, there is a way, as the proverb goes."
In parallel, the Iranian FM denied any connections between the negotiations on the Iranian nuclear file with the US and the Syrian crisis. "Definitely not. On the Syrian side, we believe we are moving in the right direction. We are moving toward removing the chemical weapons and pushing a political process, which would end the bloodshed and herald negotiations."

"We believe these steps to be important and they should be taken with steady efforts to solve the issue in a realistic and comprehensive manner. We believe that possession of nuclear weapons by non-state actors, especially the extremist groups in Syria, to be a threat against the whole region, in addition to international peace and security. This threat should be seriously addressed in the context of removing chemical weapons from Syria. It should include all areas, including those occupied by the armed groups."

Concerning support for the Palestinian and Lebanese resistance, Zarif added, "It is based on the essence of our foreign policy, which remains the same."
He concluded that peace cannot be achieved through violence and denying Palestinians their rights.