"Israeli" Haaretz daily, in its issue published on Thursday mentioned that the "Israeli" Prime Minister Benjamin Netanyahu made a phone call yesterday with the US President Barack Obama during the former's "political visit" to China. 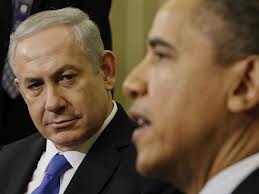 Both the US and "Israeli" parties focused on developments regarding the Syrian crisis, according to an American employee informed on the conversation that had occurred.

In this context, the daily noted that this phone conversation is the first of its kind between Obama and Netanyahu ever since the "Israeli" attack on Syria last week.
The senior American employee highlighted, "Obama and Netanyahu also discussed the US Secretary of State John Kerry's quest to renew "Israeli"-Palestinian negotiations and progress in the peace process."

For its part, the White House declared yesterday, "Both parties discussed security matters as well as the political negotiations and agreed on continuing cooperation in different security files."

The US Secretary of State stated, in a visit to the "Israeli" Minister of Justice in charge of negotiations with Palestinians, Tzipi Livni, that he intends on coming to al-Quds and Ramallah again on May 21 to renew the so-called peace process.