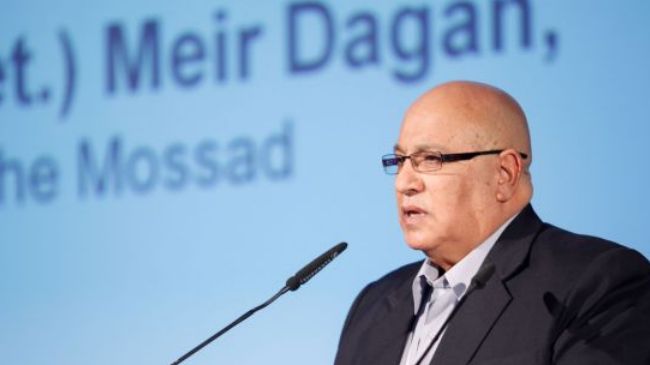 "As the Jewish state, "Israel" should be happy to see the downfall of those using brutal force against its own people," Dagan claimed at President Shimon Peres's Facing Tomorrow Conference in occupied al-Quds (Jerusalem).
Speaking at a conference in New York on Sunday, Dagan said Tel Aviv must "do whatever it can to make sure that Syrian President Basher al-Assad is removed from power."
Moreover, appearing on BBC's HARDtalk program, Dagan noted that as a Jew whose parents survived the alleged Holocaust, "when someone is using the might and force of a country to execute its own citizens, it is against my own morality."
"Anyone who can raise a voice must do it, especially the State of "Israel"," the Zionist former top intelligence official said.

Dagan added that the ouster of Assad would be hugely beneficial for "Israel" from a strategic point of view, adding that it would weaken Iran's regional influence, and also weaken the Lebanese resistance party of Hizbullah, allowing Lebanon.
"What happens in Syria will impact the most on Lebanon, where Damascus has the most influence, but also will have impact on Jordan and elsewhere," he further added.

And Tel Aviv should not be too worried about the possibility of hostile forces taking power in Syria, since Saudi Arabia and other Persian Gulf states will make every effort to install a "moderate" regime in Damascus, the former "Israeli" spy chief assumed.

The Zionist entity joins the United States, Britain, Saudi Arabia, Qatar, and Turkey in their scheme against the Assad regime. These have been providing weapons and funds to terrorist groups in Syria, such as the al-Qaeda affiliated group Jabhat al-Nusra, which are fighting to depose Assad.

Syria was hit by a violent unrest since mid-March 2011; many people, including large numbers of soldiers and security personnel, have been killed in the violence.