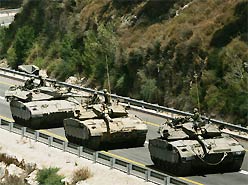 The following are the Islamic-Resistance operations that took place during the month of October in 1997...

In fact, the operations the Islamic Resistance performed this month have revealed more as to the occupation forces' defeat, especially when the fighters struck the Merkava tanks of "the invincible military", refuting the "Israeli" claims as to the indestructibility of the well-armored Merkava tanks.

To overwhelm the occupation soldiers this October, the Islamic-Resistance fighters focused on demolishing the Merkava tanks, the best armored vehicles the enemy had so far relied on while performing their operations of terrorism. The fighters actually made the occupation commanders hold a series of special sessions so as to confer the protection means for the tanks and their crewmen.

On June 14, 1997, the Islamic Resistance attacked the enemy sites of al-Qalaa, ad-Suweidaa, and ad-Dabsheh, demolishing several site mounds and fortifications. In the meantime, a Merkava tank attempted to back ad-Dabsheh site, a group of the Islamic-Resistance Fire Backup Unit bombarded it, directly setting it afire and preventing the enemy from hauling it from the battle field.
The enemy soon acknowledged a soldier and an officer were wounded.

The "Israeli" channel mentioned in a special report on the incident that "apparently the Merkava tank is more vulnerable to attacks than used to think... Clearly, this tank is totally unable to protect the soldiers. Haaretz as well said on October 20, 1997 that the "Israeli" military "is apprehensive as Hizbullah men are successfully hitting the Merkava tanks in southern Lebanon..."

The military commenced an investigation into the incident whereby General Yisrael Tal, nicknamed "the Tank's Father", began studying the incident's circumstances. The investigations revealed Hizbullah men had been 200 meters away from the tank before they launched several rockets against it and hit the tank's front side by the driver.

The Islamic Resistance performed an operation series at the heart of the occupied region, dedicating them to the soul of "the Islamic-Jihad Movement for Freeing Palestine" Secretary General Fatahi ash-Shikaki so as to mark his second martyrdom anniversary.
The fighters began by blasting three Mercedes cars with a massive explosive as the Zionist motorcade was on Houla-Markaba-Odeisseh Main Road, 50 meters away from the borders with Palestine and 200 meters away from a crossing point of the Lahd Militia. The blast actually wounded two "Israeli" commanders, one of who was in a critical condition.

Half an hour later, another "Israeli" motorcade appeared on the same route, coming from occupied Palestine through "ad-Dawaweer Gate" near Margeliot Settlement. Thence, the Islamic-Resistance fighters struck the motorcade with machine guns and artillery. The commanders on the motorcade suffered casualties.
For its part, the Fire Backup Unit attacked al-Qabaa'-Markaba Site and launched more the headquarters of "Battalion 70" in Markaba Barracks while the Zionist officers of "the Northern Command" were holding a meeting, among who was Chief of "the Liaison Unit Eely Emetai" and Lahd officers including the commander of "Battalion 70" Robin Abboud. The fighters actually bombarded the site after the Zionist and Lahd officers had checked the operation zone. A huge fire was set inside the barracks.

Four "Israeli" militants were killed and seven others wounded in the attack against the motorcade, some information sources reported, adding that the artillery striking Markaba Barracks set it on a huge fire and severely wounded the head of the Lahd Militia security officer Zuheir Shukeir and gouged his eye. The sources reported that his escort was wounded, too, while they were on the motorcade which the Resistance blasted. More than an "Israeli" ambulance rushed to the operation zone after the blast, and twenty minutes later, two "Israeli' helicopters landed down to evacuate the casualties into hospitals in occupied Palestine, the sources said.

On October 9, 1997, the enemy displayed a video tape on the operation, confirming that Hizbullah had been trying to kill the commander of "the surveillance in Lebanon" Brigadier General Eely Emetai, adding, "Apparently there were two Hizbullah cells in the operation zone, one implanted mines while the other got positioned in a house near the international borders. Then "TOA" missiles were launched... The channel's team, arriving at the border fence to cover the evacuation of two "Israeli" soldiers that had been wounded in a blast shortly before, took pictures of the missiles shot from the house. Thence, this drama took place... Who shot fire? This is the question "the Northern Command" is now dealing with. But even this fire did not prevent "the demolitionists" from withdrawing without hitting targets as they were covered by coordinated artillery strikes against the zone including the house and the surrounding military sites..." The "Israeli" channel considered that Hizbullah had demonstrated high military coordination in the double operation.

Earlier on October 1, 1997, the Islamic Resistance performed an operation on Mount al-Jama'a near the occupied Aitaroun Town while a Zionist-Lahd force was there. Agent Muhammad Jawad Abdul Men'em was killed in the operation. Abdul Men'em was born in Aitaroun in 1955. An artillery sergeant, he served "Battalion 95". More information was reported on the Lahd agent Ahmad Halawi (from Kfarkila Town); he suffered a critical condition after his injury in the operation the Islamic Resistance performed on October 4, 1997 against Mash'aroun Site in the Middle Sector. Agent Halawi was transported to a hospital in occupied Palestine.

The Islamic Resistance blasted the vehicle of agent Salim Reesha while he was en route to Annan Site. The blast killed him and his escort. The Islamic Resistance displayed a video tape showing the agent's complex camouflage movements he made after leaving his house on the operation day. The fighters' camera tracked the agent until the civil van he was on was blasted. The agent had actually owned several vehicles in order to escape the Islamic Resistance's strikes.

Agent Reesha was a senior officer serving the intelligence of the enemy and the Lahd Militia. He owned two houses: one in his town Mazra'et el-Mat-Haneh and the other in Roum Town. In 1993, the Lebanese authority issued a judicial arrest warrant for his collaboration with the enemy.
Even before 1982, he became seriously involved with the "Israeli" terrorizing Mossad. Besides, during the days of the "Israeli" invasion, he used his house as a main station for senior officers of the "Israeli" intelligence. Reesha was responsible for running agent webs in the liberated regions, and he recruited many agents in service of the enemy. He also handled most of the security missions after the death of the security officer Toni Nohra.

Countering the "Israeli" aggressions, the Islamic Resistance performed more than 20 air, ground, and maritime attacks, targeting the Zionist-Lahd sites in the occupied region. The fighters commenced their operations by breaking into Kassaret el-Oroush Site, only several meters away from which they were, and attacking a Zionist infantry positioned there. Violent clashes went on.

Meanwhile, other Islamic-Resistance groups attacked Bir Kallab Site and Sojod Site, and the Tank Sniping Unit hit a Merkava tank on Jabal ad-Dabboura Hill. Also on October 26, 1997, the fighters attacked the sites of Teir Harfa, Rchaf, Blat, al-Qantara, Haddatha, Braachit, Mash'aroun, al-Qalaa, Sojod, Bir Kallab, in addition to the Radar Site.
The enemy acknowledged the operations, claiming "only" two Zionist soldiers of "the Golani Brigade" and "one" Lahd militiaman were "wounded". The enemy also acknowledged the condition of one of these Zionist soldiers was critical.

While carrying out an exchange process on the way to al-Mashnaqa Site, some Lahd militiamen on a vehicle were blasted by the Islamic-Resistance fighters. The vehicle was directly damaged, and the militiamen on it suffered casualties. Half an hour later, an ambulance arrived in the operation zone, evacuating two corpses from the vehicle struck. The Lahd-Militia sources acknowledged the death of agent Ibrahim Mansour and agent Nicolas Assaf, as well as the injury of another agent.