Hours after the martyrdom of the Resistance fighter and freed prisoner Smair al-Quntar by an "Israeli" strike against Syria, Hizbullah Secretary General His Eminence Sayyed Hassan Nasrallah vowed the response on the "Israeli" aggression. 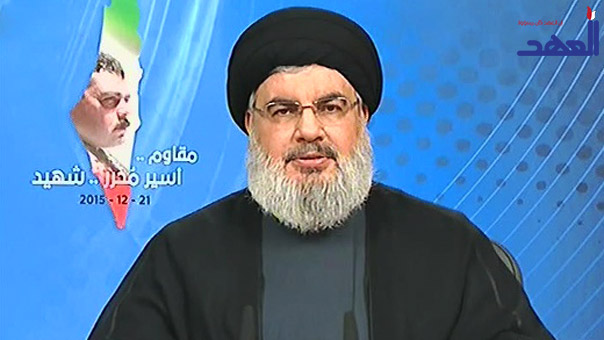 In the beginning of his speech delivered via al-Manar channel, Sayyed Nasrallah condoled the family and the Lebanese community for the departure of the religious figure Sheikh Mohammad Khatoun, the dear friend.

His Eminence further denounced the Nigerian army's massacre against the civilians and the kidnap of Sheikh Zakzaki.

Condemning the international community's inaction concerning the recent massacre, he called on the Abuja government to release Zakzaki and to take swift action and bring to justice those who committed the crime.

On the martyrdom of al-Quntar, the Resistance Leader revealed that "it is apparent that the Zionist entity targeted the building that Samir al-Quntar was in, martyring him along with other Syrian Resistance fighters."

"We have no doubt that the "Israeli" enemy was behind the assassination in a blatant military operation," he said, pointing out that "the brother, Samir, had always been a target for "Israel"."

In addition, Sayyed Nasrallah asserted that "we clearly and openly accuse the Zionist enemy of assassinating Samir al-Quntar."

According to His Eminence, "He, who kills Samir al-Quntar, serves "Israel". However, the "Israeli" threats preceded the issue of the military resistance in the Golan."

""Israel" had always threatened martyr Samir al-Quntar, because this enemy neither forgives nor asks for forgiveness," he mentioned.

Hailing al-Quntar, the martyr, Sayyed Nasrallah said: "Tonight I will not speak about the good characteristics of the martyr, I will settle for a central label which is "the lover of Palestine", Palestine was his entire life."

"The destiny of Palestine, its people, and Resistance was al-Quntar's major concern."

His Eminence further revealed that "even on the first day of his liberation, he refused to discuss of any options, al-Quntar said: "I only left Palestine to return to it", and he was always ready for a military operation, inside Palestine."

"Does this enemy think that he will put end to this love and faith?" Sayyed Nasrallah wondered, noting that "the blood of Samir al-Quntar affirms that the Resistance's slogan will not fall and will move from one hand to another and from one generation to another."

From al-Quntar's love to Palestine, Sayyed Nasrallah moved to hail the Palestinian martyrs in the 3rd intifada, particularly the young men and women: "One of the sample of today's youth is Ashrakat Qatnani, the young lady with all that awareness, determination and deep recognition of the cause that she sacrificed herself for."

"Samir al-Quntar's blood will give the Palestinian youth more determination, this martyrdom has made him a model in sacrifice and resistance."

Regarding the recent American sanctions on the Resistance, its men, and community, Sayyed Nasrallah stressed: "The US had blacklisted us on the list of terrorism since 1995, and for decades they have tried to impose this label on us but they failed."

"Today, the US is trying to give us another label which is "a criminal organization" that commits crimes like forgery, drug dealing..."
In addition, His Eminence elaborated: "For many years, since listing us as a terrorist organization, America has worked on targeting Hizbullah in different ways. However, they have failed ... Countries such as China and Russia do not consider us terrorists and they have blocked US attempts to further exert pressure on us."

He dismissed accusations that the Resistance was responsible for money laundering, drug trafficking and human trafficking, saying the claims were nothing but lies and aimed to tarnish the party's image. "These accusations are politically motivated as part of a political and military battle in the region aimed in the first place at distorting the resistance's image."

"The new US accusation is a political one," he mentioned, noting that Washington "seeks to disfigure Hizbullah in the eyes of the people, and the US has previously spent large amounts of money to do so."
According to the Resistance Leader, "the US has spent millions of dollars trying to build a barrier between the Lebanese youth and Hizbullah."
In response to the US move, Sayyed Nasrallah said: "In order to confront the US lies, we must assure that all the psychological and media measures will not affect us."

"As for the money, we assure that we don't have bank accounts and we don't transfer our enemy in that way. Hizbullah has no money in world banks and Lebanese banks. Our money is transferred in cash and not put into accounts."

Moreover, His Eminence said: "All this American attention on us and Congress meeting to take unanimous decisions to sanction us proves the US recognizes Hizbullah and proves we have a strong presence in Lebanon and in the region and that we are not a minor force."

On this level, he urged the Lebanese government and judiciary to protect the Lebanese citizens, traders and firms that could be falsely accused by the US of having ties with Hizbullah. "We need no protection but men in this government to stand and protect the citizens."

On the media front, Sayyed Nasrallah viewed that "the most critical US measure is that related to media, for the US wants to accuse you, punish you, and kill you, and you don't have the right to defend yourself in front of people."

"Media is part of the battle and we must not surrender but rather find other available tools to let the world hear the voice of the Resistance."

Moreover, he explained that "the US that claims democracy and freedom prevents opposing media outlets to explain or express their stances. Given the fact that that the US is occupied with us and is announcing new types of wars and sanctions on us gives us certainty that we are on the right track."
"It is our pride to be the enemies of America and "Israel"... and we will not give up or surrender in this battle."

Sayyed Nasrallah accused the US of supporting terrorist organizations in the Middle East, saying it was working with the Zionist entity to dominate the region. "We will not bow down to "Israel" and the US, and we will continue to destroy their projects in the region as we have done since the 1980s."

T the enemy, the Resistance Leader sent a clear message: "I tell the enemy and the assassins, even if you put all your efforts you will not be able to erase out memory. This truth was said year 61 Hijri with Imam Hussein in front of the tyrants and we will repeat it today."