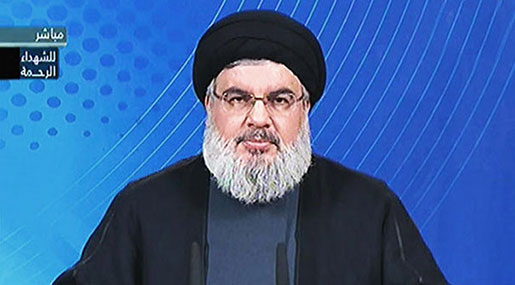 In a televised speech, in which he tackled the latest terrorist bombing that rocked Dahyieh on Thursday, Sayyed Nasrallah announced that Hizbullah strongly condemns and denounces the terrorist attacks committed by the criminals of "ISIS" in the French capital, Paris.

As he deemed it necessary to officially condemn the terrorist attacks in the French capital, Paris, which were committed by "ISIS", His Eminence declared that the Middle East was also suffering the earthquake of the terrorist takfiri groups.

"The people of our region who are suffering the earthquake of "ISIS's" brutality are the most aware of this painful tragedy...We express our sympathy with all the innocent people, attacked by ISIS," the Resistance Leader noted.

Back to the subject of the speech, Sayyed Nasrallah condoled the families of the martyrs in Borj al-Barajneh and asked al-Mighty God to make the suffering people overcome this ordeal with stability and cohesion.

"We ask al-Mighty God to grant all those affected by the Borj al-Barajneh attack steadfastness and satisfaction, and we thank all the people who have helped since the first moments in managing the ground situation," he added.

He further thanked the Lebanese Army, the security and judicial agencies, and mass media, as well as all states, governments, parties, political and religious references, as well as movements and international organizations in the world that have condemned this crime and expressed their sympathy with Lebanon

On the level of investigation, Sayyed Nasrallah emphasized that it became firm that the terrorist "ISIS" group is responsible for this crime and the detainees have confessed that they are linked to "ISIS".

"The detainees are Lebanese and Syrians. There is no Palestinians so far," he revealed, noting that "there are two suicide bombers, who carried out this terrorist attack. It is not true that there is a third or fourth suicide bombers. The reality is that one of the suicide bombers is a Syrian."

According to His Eminence, "So far, one of the suicide bombers is a Syrian national, while the other hasn't been yet identified, yet information indicate that he is also Syrian."

"The arrests of the suspects have foiled more attacks," he said, pointing out that the "most important news is that Information Branch and the General Security have arrested individuals who are involved in the attack."

In parallel, Sayyed Nasrallah highlighted that "the dismantling of networks, arrest of masterminds, and increased checkpoints have decreased the threat of suicide car bombings."

He also stressed that "we should reach the source of the terrorists and not just take precautionary measures."
"We must face this kind of takfiri terrorism. We must not rely only on precaution measures, but must go to the terrorists' bases," His Eminence viewed.

"We must follow the same style with Vehicle Born Improvised Explosive Device networks, i.e. catching the sources of these networks, and the arrests and raids that happened in the past days come in this context," he said.

In response to the acts of terrorism, Sayyed Nasrallah confirmed that "we must face this new wave of explosive belts the same mentality that followed the car bombs, i.e. we must catch heads, and move to the nearest place of the leadership that sent them to carry out terrorist attacks."

"To deal with this kind of terrorism, we must work together, because precautionary measures are not enough, but we must catch the leadership, the facilitators, the carriers, and the logistic lines in order to disassemble these networks," he underscored.

Urging the Palestinian and Syrian refugees to shoulder their activities in dealing with terrorism, Sayyed Nasrallah elaborated that: "the "ISIS" network benefited from several apartments in Beirut and from one apartment in Burj el-Barajneh Palestinian refugee camp which was raided by the Lebanese security forces with the full cooperation of the camp officials.

"The purpose of accusing Palestinians of the Beirut attack was to stir strife with Lebanese," he said, pointing out that the security forces achievements prevented similar attacks that were plotted for the upcoming days.

Meanwhile, Sayyed Nasrallah praised and thanked the security forces, for making the north of Lebanon survive and away from a terrorist attack days ago.

On another aspect, he warned against targeting Syrian refugees following incidents like the Borj al-Barjineh attack."
"We must foil the enemy's goals. The "Israelis" and takfiris want to spark civil war in Lebanon and the country's achievement is fortifying itself against such threats.

According to His Eminence, "there are those who want to convert the Palestinian to an enemy to the Egyptians, Syrians and Lebanese, and so to say that our enemy, which is killing us, is the Palestinian people.."

He further warned that the current terrorism we are facing is indiscriminate and unprecedented.

Urging all Lebanese sides to preserve the country's unity, Sayyed Nasrallah asserted that "no one has the right to hold the entire Sunni sect responsible for the Bourj al-Barajneh blast if it turns out that one of the attackers was Sunni.."

He also urged all the refugee brothers - regardless of their political position, whether they are pro-regime or with the opposition - not to allow these [terrorists] groups to take advantage of your presence to carry out terrorist operations.

To "ISIS" and its militants, Sayyed Nasrallah sent a clear message, "The recent attack only increases our determination to fight "ISIS"."

"If they suppose that killing our men, women, and children as well as destroying our homes and markets could weaken our Resistance's will and determination or make us change our vision; they are wrong," he confirmed.

Furthermore, he announced: "Such terrorist attacks increase our determination and makes our presence greater...After this bombing, we are going to search for "ISIS" fronts and to be effectively present in fighting them. This is how we express loyalty to the martyrs' blood."

"This attack will only increase Hizbullah's determination to fight "ISIS" in Syria," the Resistance Leader mentioned, noting that "after this bombing, we are going to search for "ISIS" fronts and to be effectively present in fighting them. This is how we express loyalty to the martyrs' blood."

On another level, Sayyed Nasrallah conveyed a message to all people linked to social media.

"All those who are active and followers on social networks must be careful that this arena can lead to tensions and problems. We must act and write responsibly and not to allow the "Israeli" and extremist infiltrators benefit from this field."
According to Hizbullah secretary General, "The second assumed goal of the "Israeli" and takfiri schemes is to pressure Hizbullah to withdraw from the battle against terrorist groups. However, they realize this will be counterproductive."

On the future of "ISIS", Sayyed Nasrallah predicted that the terrorist group has no future. "Its age is very short. It has no future neither in war nor in peace, and today it is losing the Syrian and Iraqi fields."

Moving to the internal front, he urged Lebanese sides to unite. "The International community is busy and we are able to face our problems and find solutions if there is a will and seriousness."

Thus, His Eminence renewed the call for a comprehensive settlement in Lebanon, and this is not - as some said - a call for a constituent conference or for amending the Taif Accord.