Hizbullah Secretary General His Eminence Sayyed Hassan Nasrallah stressed the importance of Palestinian cause to the Islamic and Arab World. 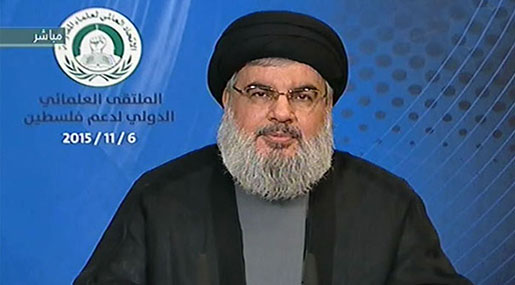 During a speech he delivered at the International Conference of Resistance Scholars in support of Palestine, Sayyed Nasrallah thanked the scholars and brothers who met at this particular time.

"This gathering came to support, and aid the honorable and renovated Intifada in Palestine," he said.

His Eminence further stated that the Resistance fighters in the battle need all kinds of support.

"What we are witnessing in Palestine is an elevated, high moral, and sublime Jihadi spirit," he said, noting that "we are before a daily self-sacrifice operation."
According to the Resistance Leader, "These operations greatly reflect the Palestinians' great faith and belief that might astonish the world, especially that almost all these operations end with martyrdom."

"What is currently happening in Palestine is not an indication of the disappointment and frustration of Palestinians- as some people try to promote- but rather their great faith in resistance and fight against the occupiers," he said.

Hailing the Palestinian uprising, Sayyed Nasrallah highlighted that the simplicity of the weapons used enables all the Palestinians to possess them and frustrates any attempt to confiscate them.

"The used weaponry, i.e. the car or the knife doesn't need a logistical support, complication, or great finance. Moreover, such types of arms can't be confiscated."

As His Eminence slammed the Islamic World's silence regarding the Zionist entity's brutality, he viewed the nation's approach towards the Palestinian cause is futile and the Arab and Islamic worlds have not responded to all the "Israeli" attacks.

"This new intifada astonished the Zionists as wells as the entire world. This comes as the "Israelis" are exchanging blames because this uprising came out of their expectations."

On this level, Sayyed Nasrallah elaborated that this Intifada made fear and terror penetrate into the hearts of the "Israeli" settlers as it also affected their economy. "The intifada obliges the nation to face its responsibilities towards Palestine and Holy al-Aqsa mosque."

Moreover, he stressed that "the Palestinian people is fighting and struggling as the nation's representative and its front line in preserving the present and protecting its future."

"The nation isn't fighting in sake of Palestine but it is rather defending itself and sanctities, including the Christian ones."

Noting that "Israel" continues to enjoy all kinds of international support, he highlighted that Tel Aviv considers that it is the international community's duty to preserve its interests. "The "Israeli" talk of 5 billion$ US aid falls in this context. They wanted a price for the nuclear deal."

""Israel" is the first representative and military base to the global arrogance. "Israel" receives all forms of support from its allies [militarily, politically, financially and informatively]; whereas, the Arab countries do not provide the Palestinians with even the basic means of confrontation."

In parallel, His Eminence warned that "Israel" represents the frontline of the colonial scheme led by the West and the US that targets the entire nation with its resources, civilization and culture.

"The evaluation to the nation's performance is negative," he said, criticizing certain Arab countries for their failure to support the Palestinian cause.

In this context, Sayyed Nasrallah denounced the fact that some Lebanese are convinced that "Israel" no longer poses a threat to Lebanon and that the Resistance in Lebanon is using this issue as a pretext to keep its arms.

"This is one of the disasters and an example of what's happening in our region," he added.

Moreover, His Eminence considered that "even raising the voice in defense of Palestine is forbidden as is the case with al-Mayadeen channel."

However, the Resistance Leader asserted that "the "Israeli" danger retreated thanks to the Lebanese and Palestinian Resistances and steadfastness, even if this threat still exists."

"Despite the fact the 'Greater "Israel"' scheme has been toppled, the Zionist entity is still powerful and threatens all the region's peoples," Sayyed Nasrallah added, "This requires political, media, and educational efforts."

Furthermore, he denounced the deployment of Muslim fighters around the world except in Palestine.

"We feel hurt when we consider the fact the nation sent in the past hundreds of thousands of fighters to Afghanistan to fight the Soviet occupation, while it has not sent those mujahidin to confront the Zionist entity, wondering whether Afghanistan is more sacred than Palestine."

His Eminence also mentioned that "if those conducting operations in Iraq, Afghanistan, Pakistan and Syria were sent to Palestine, then "Israel" wouldn't still exist. Fighting the Russian occupation in Afghanistan was righteous, but why would not the same countries send all its human and materialistic capabilities to fight the Zionists in Palestine?"

"If all the suicide bombings which targeted the Lebanese, Syrians, Iraqis, Yemenis, Nigerians, Pakistanis and Afghanis had been employed against the Zionist entity, it would have vanished.

In addition, he stressed that those terrorist attacks aimed at destroying the nation's solidarity, armies and peoples.

"The region must be confronted, stressing that the nation must play a vital role in pervading awareness among the youths so that they stick to the supreme values and goals, including the Palestine and its Islamic and Christian sanctities."

Sayyed Nasrallah also stressed that all the educational, media and religious elites in our nation must exert all the possible efforts in order to curb the losses caused by the current regional conditions.

Sayyed Nasrallah confirmed that attributing the Islamic and Arab refrain from supporting the Palestinians to the current disturbances in several countries is untrue because the 1.4-billion nation did not show an effective support to the Lebanese and the Palestinian resistance factions during the "Israeli" aggressions and invasions in 1982, 1996, 2006 and 2008.

He further deemed that a number of Arab countries have provided the terrorists in Syria, Iraq, Yemen, and Libya with huge funds and abundant weaponry, but they have not supported the Palestinians against the "Israelis".

"Instead of provoking hostility against the Zionists, some Arab governments have instigated feud against the Palestinians and that they even gloat over their losses."

His Eminence further warned that the sedition scheme attempts to stir the struggles among the Sunnites and the Shiites and push the Christians to ally with 'Israel' in face of the takfiri plot.

Sayyed Nasrallah confirmed that the current Palestinian Intifada can at least protect al-Aqsa Mosque and the rest of the Islamic and the Christian sanctities, adding that the Muslims and the Christians must reject the seditions and unite to confront the Zionist dangers and threats.

"We trust Holy God and the mujahidin and we are sure that the firm divine promise will lead us to the major victory," Sayyed Nasrallah finally emphasized.

He also concluded by urging the formation of a forum to discuss the Palestinian cause, in which nations would "distribute responsibilities."

Sayyed Nasrallah called for support of what he considered a new Palestinian intifada, or uprising.

"If they [Palestinians] can defend al-Aqsa then we shouldn't fall short on supporting them," he said.