Hizbullah Secretary General His Eminence Sayyed Hassan Nasrallah confirmed that the Resistance will defeat the US-takfiri scheme as it did with "Israel". 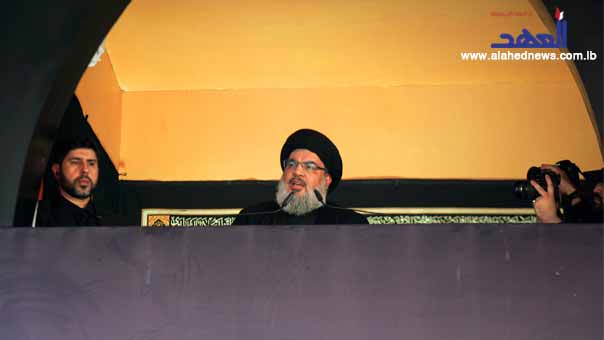 Addressing hundreds of thousands commemorating the 10th day of Muharam in Dahyieh, the Southern Suburbs of Beirut, Sayyed Nasrallah reiterated the worshippers great connection to the Prophet and His Household.

"O our Holy prophet, those worshippers cried your Hussein despite the fact that they are 1366 away from Karbala incidents."

As His Eminence condoled, in the name of the huge Husseini crowd, the Holy Prophet, Imam Ali, Sayyeda Zahraa, and Imam Mahdi, he sent an everlasting pledge to Imam Hussein [PBUH]: " Imam Hussein won't be abandoned or betrayed and we will always be at your service O Imam Hussein."

He further vowed: "We will continue to cry Imam Hussein with blood and not only tears."

In parallel, Sayyed Nasrallah hailed the Resistance martyrs in all fields. He saluted their families: mothers, fathers, wives and children.

Similarly, he praised the Resistance Mujahedeen at the Southern borders with Occupied Palestine and those on the eastern borders facing the takfiri scheme.

On the political field, Sayyed Nasrallah reiterated Hizbullah's full support to the Palestinian people in their uprising in face of the Zionist entity and their struggle to protect al-Aqsa Holy mosque.

"We renew our support to the Palestinian people and call on the Islamic word to back them in defending al-Aqsa," he added.

Moreover, he predicted that "Israeli" premier [Benjamin Netanyahu ] cannot stop the resistance movement in the region." Neither Netanyahu nor his grand -grandfather would prevent the resistance from owning any weapon that might face any "Israeli" stupidity. "

Slamming al-Saud's brutality in the region, Sayyed Nasrallah reiterated his party's condemnation to the Saudi aggression on Yemen. "We confirm our support to the Yemeni people who we are proud of their steadfastness."

"Riyadh is committing crimes and massacring civilians in front of the eyes of the world," he said, noting that "the Yemeni armed forces and popular committees will eventually emerge victories in their fight against the al- Saud dynasty and its agents."

Meanwhile, Sayyed Nasrallah denounced the Saudi- al-Khalifa terrorism against the oppressed Bahraini people, who are firm to attain their rights.

Once again, His Eminence expressed his party's sorry and anger for the martyrdom of pilgrims in Mina massacre and called for an investigation into the incident that resulted in the death of more than 1200 pilgrims.

On the Iraqi front, His Eminence said: "We look forward to the victory of the Iraqi people against the "ISIL" terrorist group. We urge them not to gamble on the US or the west. you have the courage enough to win against them all."
"Don't bet on US or western hypocrite sides. You can, with the name of Imam Hussein, and your willful people defeat "ISIL"," he addressed the Iraqi people by saying.

As His Eminence announced the Resistance's firmness in its continued battle in face of the US-takfiri scheme regardless of the sacrifices, he vowed the following:
"As we defeated "Israel", we will defeat the takfiri scheme. The takfiris and their American masters will be defeated as well."

According to the Resistance Leader, "The anti-"Israeli" resistance front is determined to stand firm against the US-takfiri terrorist war on our nations and religion."

On the internal front, Sayyed Nasrallah reiterated Hizbullah's openness to national dialogue. "We are to address the ongoing dialogue seriously because there is no substitute."

To the sides, which had a failing bet on the Iranian nuclear file, Sayyed Nasrallah said: "You have waited for finalization of Iran's nuclear agreement thinking that Iran will abandon us in the end, but it has not."

"You are slaves to the US because you are after its money, oil and gas; however, we are the masters of our decision. We, Hizbullah, the party of Velayat al-Faqih, are masters in the Supreme Leader's eyes."

He further mentioned: "We, in Lebanon, are the decision makers, we elect and choose our own electoral law, no one can impose anything on us."

" We urge the political parties to find solutions to the country's crises and not to wait for regional developments. You waited for the Syrian government's defeat but after 5 years it didn't and will not. God will, Syria won't be toppled."

He also advised them to "forget this illusion that they could eventually make this Arab nation fall as it will continue to remain steadfast as part of the Resistance."

Back to the annual pledge to Imam Hussein, Sayyed Nasrallah said: " We will stay here, we won't be moved with "Israel's" wars, nor Takfiri groups wars. We'll work day and night for the dignity of all our people. We are the supporters of Imam Hussein."