Hizbullah Secretary General His Eminence Sayyed Hassan Nasrallah confirmed on Sunday that the Resistance men are to be present where they should be. 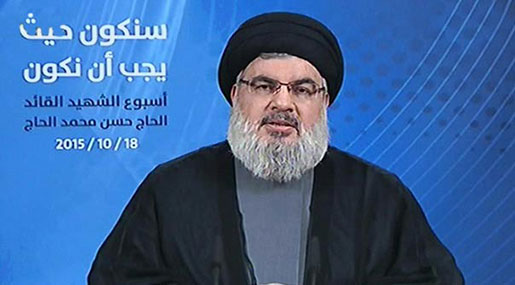 During a speech he delivered on the martyrdom week of the Sacred Defense Martyr Leader Hassan al-Hajj [Abu mohammad al-iklim], Sayyed Nasrallah condoled the family of this noble and great Resistance leader. "Hajj Abu Mohammad is a leader and pillar of the Resistance."

"Since 1982, Haj Abu Mohammad had no life out of the resistance. Since its start, he used to live in its valleys, tunnels, and mountains. One of the most significant points once you talk about abu Mohammad is his personality, and religion."

As His Eminence praised the traits of this noble martyr, Sayyed Nasrallah revealed that "anyone who knows Abu Mohamad would ratify what I say."

"He was known for his special concern with his parents and family, being humble, ready for sacrifice, as well as his permanent presence on all fronts. This was due to his love to al-Mighty God."

On this level, Sayyed Nasrallah noted that: "There was no Hassan al-Haj. He used to ignore his own self. He wasn't to talk about his jihad, wounds, sacrifices and martyrdom."

"We lost a person with these characteristics before we lost the Resistance Leader. He was to confront the takfiri scheme after facing "Israel". Since the beginning, he had a clear choice. He was present at all fronts."

According to His Eminence, "This Resistance would strengthen when its leaders are alive, and would be determined when they pass as martyrs... They are the unknown on earth, the well-known in the Sky."

In parallel, Sayyed Nasrallah clarified that "We are before a Zionist enemy on one side and a terrorist takfiri enemy that seeks blood on the other side."

He also stressed that the Resistance front has gained many victories through the sacrifices made by its courageous fighters, adding that the it will continue despite the martyrdom of its commanders in the battlefield against terrorists.

"We are to protect Lebanon, our honor, and sovereignty," he vowed, noting that " this is how the Resistance men completed their lives after 2006 aggression. We had no solution but to build power and deter the enemy."

To the Mujahedeen, Sayyed Nasrallah sent a clear message: "To them, I say, his [Abu Mohammad's] will is to save the power, that the Resistance attained."

"Maintain the strength that you have built and work on developing it because it is the road to preserve our country and people."

"It is the guarantee to save our country, honor, land, and dignity."

When martyrs fall, the loved ones feel anxious. They might wonder if this will lead to a retreat in the Resistance performance.

To those worried, His Eminence said: "I would like to assure that the Resistance has a number of leaders, pillars, and cadres."

Moving to the developments on the Palestinian field, Sayyed Nasrallah mentioned: "This renewed intifada is the only hope . This is a new chance for the new Palestinian generation to liberate al-Aqsa Holy mosque. All those who betted on the Palestinian tire are in front of new generation, i.e. fighting with the knife."

"The Resistance will stand to confront the Zionist entity, to support the Palestinian people in their uprising, intifada, and cause," he said, urging all sides to stand by the oppressed Palestinian nation in its Intifada against the occupying entity.

Warning that the takfiri scheme ought to destroy everything: the person, the civilization, and history, the Resistance leader emphasized that "were it not for the steadfastness of resistance fighters on the battlefield against "ISIL" and other extremist groups, the situation of this region would be even worse."

"More than 4 years and we are confronting this takfiri scheme. Weren't it for the steadfastness of all the sides facing "ISIL" and its sisters, what would the fate of our region be? [There would be] total immigration, destruction of churches, and mosques. They would have enforced a way of life that is away from any norm and ration."

"Without the resistance, there was no liberation. Without its readiness, the Resistance wasn't to be victorious in 2006 aggression. If these bloody groups spread their control over these countries, what would be the fate of these people and countries?" he asked.

In an attempt to give answers, Sayyed Nasrallah said that "there would be no elections, no decision, no sharing."

"With this steadfastness, we protected the region. The battle is still open and might be long."

Regarding the situation in Yemen, His Eminence said: "The Saudis manage to break the resistance of the Arab nation, al-Qaeda and Takfiri elements will be able to step up their terror activities there. This steadfastness in Yemen is to save it from not only the Saudi aggression but further from the terrorist al-Qaeda group as it is the case in Hadrmout and other regions."

"On this road, Haj Abu Mohammed fell as a martyr," he noted, mentioning that "this what had driven the Resistance Leader to be present in al-Ghab, or on the fronts in Hama and Aleppo."

On this level, Sayyed Nasrallah vowed that: "The Resistance front is determined to fulfill its responsibility and pursue the fight against Takfiri terrorism to defend all Muslims and human values in general."

"There are many countries in the Arab region that have been witnessing an alter in the public opinion. This change is due to the steadfastness in the battlefield. It is because of the sacrifices."

Providing examples of the terrorist scheme, Sayyed Nasrallah said: "In Nigeria,
every day and then there are bombs that target mosques. They are killing the Sunnis there just because they aren't affiliated to them."

"In Qatif, a mosque and a Husseini were targeted under the pretext that those present are infidels. Because they express their love to the Holy Prophet and His Household, they are to be bombed and targeted."

According to Sayyed Nasrallah: "These incidents increase our clarity and the correctness of our choice to protect our region."

In addition, Sayyed Nasrallah stressed: "We, Haj Abu Mohammad's brothers and beloved ones, won't abandon our responsibilities. We are to be present where we should be."

He further assured that "We, in Hizbullah, have the capabilities to be present at two fronts, to face the "Israeli" aggression as well as the takfiri scheme."

On the internal front, Sayyed Nasrallah reiterated his party's stance from the developments: "We are always keen on the dialogue and internal meetings. Even our partnership in this government was to preserve the country. They were on the edge on burning the country just to topple the former government. However, we didn't have the same way of thinking. We seek the national interest."

"The Lebanese interest is in dialogue. The substitute is vacuum and devastation."

His Eminence also reaffirmed Hizbullah's commitment for dialogue and convergence among the Lebanese. "We have participated in this government for the security and political stability in Lebanon."

Moreover, His Eminence highlighted that " we have heard in the past few days some stances on which our brothers [in Hizbullah] have replied. During all the last period we've heard from the future party expressions as if it is bestowing its participation in the dialogue upon the Lebanese people. This sense is unacceptable for us. We reject that anyone may bestow such a favor upon us."

In reponse Sayyed Nasrallah announced that he  will call on Hizbullah's leadership to reconsider participation in the dialogue as the party rejects such blackmailing.

However, he assured that despite the government's sluggish performance, Hizbullah calls for maintaining and not toppling it.