Hizbullah Secretary General His Eminence Sayyed Hassan Nasrallah delivered on Friday a speech in which he tackled a number of local and regional topics.


In his speech marking the 9th Anniversary of the Divine victory, the Resistance Leader welcomed the people's presence in the blessed Hujeir valley.

On the first part of his speech, Sayyed Nasrallah extended Hizbullah's condolences to the Iraqi people over the victims of the Iraq bombings, who were massacred by the "ISIL" in its terrorist attack on al-Sadr city. 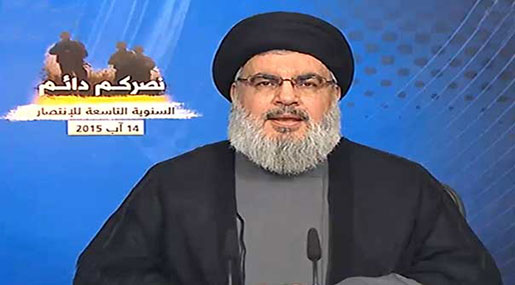 Thanks to Resistance's People

Moving to the event of the celebration, Sayyed Nasrallah thanked all those who resisted, helped, and contributed to this Divine victory.

"We thank all those who fought, endured, supported and offered their lives ... I salute the heroic fighters who fought till the last drops of their blood and continue to make miracles and to raise the flag of victory in each battle they fought," he said.

His Eminence further hailed the families of the martyrs, those injured, as well as the great Mujaideen and their sacrifices

To the families of the martyrs, those wounded, and the Mujahidin, Sayyed Nasrallah sent a touching message: "As my tongue is speechless, I bow and kiss your hands."

In parallel, he called for marking August 14 as a national Lebanese Holiday. "What happened on August 14 during the July war was a real miracle."
"The return of the people in this day forms an eloquent expression of their attachment to the land of ancestors, whatever the sacrifices were," Sayyed Nasrallah emphasized.

Moreover, he highlighted: "Here's al-Hujeir valley with all its characteristics, in the middle of the South and on the road to Palestine."

According to His Eminence," The resistance has achieved victories and defeated the hegemony schemes in Lebanon and the region."

"The legendary steadfastness of our resistance , our military and people in the July war resembles the commitment to confront the enemy. Popular and political endurance contributed to the military victory despite the political divides in 2006," he mentioned.

Moreover, the Resistance leader affirmed that "the Hujeir valley's battle was decisive in the July war."

"The Resistance humiliated the enemy and toppled all the military plans," he said, and pointed out that "Israel" performed the most dramatic airdrops in Hujeir valley during the war in July because it needed a qualitative achievement, which and that did not happen."

He also recalled that "they [the "Israelis"] wanted to occupy the Southern region of the Litani in order to have an upper hand. However, the Hujeir valley and the surrounding towns showed a heroic battle as dozens of tanks were destroyed and dozens of "Israeli" elite soldiers were killed . Here they suffered the hell and the Hujeir valley was the graveyard for the Merkava tank. The myth of the invincible army was destroyed here."

"The "Israelis" were seeking an achievement to boost their morale prior to the end of the war, but they failed to achieve anything. They also wanted to impose their conditions on the Lebanese," Hizbullah Secretary General stressed.

Every Spot To Defeat "Israel"

Sayyed Nasrallah further assured that "every spot of our land will be an immunized bunker that will defeat your plans. In the face of the land invasion strategy that the enemy is speaking of, we put the al-Hujeir Valley strategy."

"Their entire scheme was foiled in this valley," he added, noting that " the 1701 UN resolution was biased in favor of the enemy."

According to His Eminence, "This war prompted a change in military strategies across the world. This war has made everyone convinced that no war can be won through aerial bombardment or massacres."

In addition Sayyed Nasrallah vowed that the "Israeli" army would achieve no victory in Lebanon should it launch a new invasion.

"Every location on Lebanese territory will be reinforced and secured, in a manner that will destroy any "Israeli" tank that attempts to infiltrate Lebanon," he said.

Back to the 2006 victory, he recalled that "despite divisions between Lebanese political factions at the time of the 2006 war, Lebanon still achieved victory."

"Now imagine what would have happened if we were all united," he asked rhetorically, urging rival factions to unite.
"Are we not capable as Lebanese to abandon our division and unite to achieve victory without international assistance?" he wondered as he pointed out that "the enemy was not able to reach the Hujeir Valley, not in a tank , a plane, or by soldiers."

Sayyed Nasrallah also stated that "we are capable of defeating the strongest armies and terrorists in the region."

" The Americans are aware of the deterrence force that the Resistance possesses in Lebanon."

As he warned that oour country is threatened in its existence, sovereignty, security and survival, the Resistance Leader called for the unity and the rise above differences in face of these existential threat

"We call for unity and for preserving the Army-People-Resistance equation," he confirmed.

Moving to the Palestinian cause, Sayyed Nasrallah renewed Hizbullah's support for the Palestinian people and their resistance in face of the occupation. He also warned of the Zionist attempts to juadize Occupied al-Quds.

Moreover, Sayyed Nasrallah warned of the fragmentation scheme threatening our region. "We reject the division of the divided and this is what the United States ,"Israel" and some Arab countries, particularly Saudi Arabia, are working on ."

"The US is using Daesh, the "ISIL", to fragment the region ... to oust governments and regimes, and to change the political maps," he said, wondering "Does the so-called "moderate" Syrian opposition have the ability to fight the "ISIL"?"
"The US wanted to use "ISIL" in Syria to overthrow the Syrian regime and say that it is unable to confront the "ISIL". It claimed that if the opposition took power, we will support them to fight "ISIL".

He also stressed: "Despite Washington's claims of battling terrorism, the US has not been serious in its so-called war on terror."

Sayyed Nasrallah further reiterated renewed Hizbullah's condemnation to the brutal US-Saudi aggression against Yemen. 'As long as there is a will and steadfastness, this aggression won't achieve its goals."

Open to All Options, Not to Leave Aoun

Commenting on the Lebanese internal crisis, Sayyed Nasrallah stated : "All Lebanese need to exert strenuous efforts to preserve coexistence. We must all believe in the rise of a state that can reassure everyone ... There is no sect in Lebanon that can lead the entire country and this approach must end."" When we are all present in state institutions, we can be reassured that no one is seeking to eliminate anyone," he said, noting that "this state is the guarantee and the solution, not partitioning nor federalism ... but it should be a state of real partnership."

Moreover, he stressed: "Real partnership can resolve all of Lebanon's crises."
"General Aoun's stance cannot be disregarded in the presidential elections," Sayyed Nasrallah warned, declaring that "We in Hizbullah won't accept that any of our allies be defeated."

To the other side, Sayyed Nasrallah said: "You cannot isolate him."

"The Free Patriotic Movement took to the street. At this stage, the interest is that they lead the street movement."

"Today... I want to reaffirm that here in Lebanon, we do not accept that any of our allies are excluded or broken," Sayyed Nasrallah said. "Especially those who stood beside us in the 2006 war and tied their necks, their fates and their blood to ours," he added, in reference to the FPM.

He said that Hizbullah's backing for Aoun was not merely political, but also involved a "moral and humanitarian" dimension, demanding respect for the FPM in government.

Sayyed Nasrallah also said: "We must find solutions to all our problems. But a major problem is that a significant segment of Christians in Lebanon is sensing marginalization and elimination.

Announcing that all options are open, he hinted that Hizbullah may join FPM street protests if Aoun, allies are disrespected

However, he called for dialogue because Lebanon is suffering a national crisis.
"The government can't have a ruling sect." he said. "This logic needs to leave our minds."

"The notion of a leading party or political force should also end," he added.

In conclusion, Sayyed Nasrallah called on Christian leaders in Lebanon to reevaluate their stances and consider reactivating the parliament to address the issues of the Lebanese and pave the way for reaching solutions to the other crises.