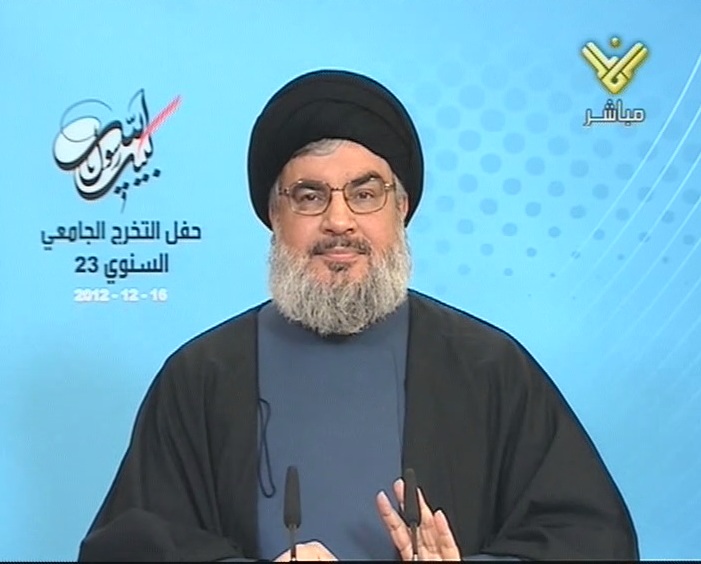 The graduate class carrying the title "The Honorable Prophet (pbuh)" is the 23rd Annual University Graduation Ceremony for Hizbullah's Taabia'a Tarbawiya (Educational Youth Association of Hizbullah) including 2740 graduates.
Sayyed Nasrallah addressed the audience, the graduates and their parents to thank them for their effort, and praised the fact that such a ceremony reflects respect and answer to the call of Prophet Mohammad (pbuh) to seek knowledge and education.

"It is a pleasure and joy to gather in this blessed ceremony, as this occasion marks an accomplishment that you made and that we are happy about because it outcome influences us all," Sayyed Nasrallah declared.

Calling on all mothers and fathers to remain always keen on their children's education, the Hizbullah leader stated "This graduation ceremony is an image to the role of Hizbullah and the Resistance in Lebanon. It is an image that reflects the reality of Hizbullah throughout a 30-year old journey since the establishment of the Resistance, since this is the 23rd ceremony [of students' graduation ceremonies that started first in 1984)."
He noted that "Many of the students who belong to the Resistance, studied and resisted at the same time, and many of them were martyred even before graduation. This assures that the path of Jihad is a scientific movement, also a movement of dignity and liberation."

Sayyed Nasrallah stressed that "Education and ethics go hand in hand which are a guarantee for their use in the service of people and the nation," iterating that "Educational development is being used to satisfy certain factions and their eagerness to control others, also to exploit the riches of nations or kill millions, while they could have been used to spread justice."
He hoped that the graduating students would liberate the nation, defend it and its riches, also improve its security and stability.

Tackling the issue of LU professors, Sayyed Nasrallah said "Some contract professors at the LU have been waiting since 1995 to be fully employed. The LU is growing bigger so it needs more professors, so we shouldn't put an employment ceiling for them. LU's manpower should increase."

Noting there has always been a problem characterized that a certain number is imposed to employ teachers [as full-timers], Sayyed Nasrallah said the government can handle paying more wages and should solve the problem, and as an example referring to the 4,000 contract workers in the security forces who were given full employment in a single cabinet session.
He called on the Lebanese government, saying "When we invest in security we resolve the results. But when we invest in education we would be resolving the reasons."

"The Lebanese University is expanding, and the number of students is increasing. The university must employ the number of teachers needed [for each faculty] and give priority for senior teachers."

On the new series of ranks and salaries, Sayyed Nasrallah underscored "There are calls for the government to approve the new series of ranks and salaries. There is a debate on how to implement this decision, as well as its implications."
He further explained that "some parties should make concessions and cooperate because there is enough funding for the wages scale. It's time for the government to end the debate on the wages scale and send the bill to the parliament."

Group of National Work for Lebanon

Sayyed Nasrallah accentuated "It is regretful a large number of political forces dropped the living conditions priority ever since the release of the gloomy Resolution 1559," elaborating that "The resistance and its weapons is their sole priority, day and night."

"Even the blood of martyr premier Rafik Hariri was exploited with the aim of targeting the resistance. Today, poverty transcends the different sects and there are no privileged regions and underprivileged regions. We call on the government to embark on work and they refuse. They are not giving this country a chance. They are not trying to solve the country's economic situation," he noted.

More on targeting the Resistance, His Eminence stated "All political ploys and military wars have failed and everyone knows that this resistance that defeated "Israel" in 2000 and 2006 is deep-rooted, strong and present in the conscience of its people and that it is stronger than all these conspiracies."
"Everyone is warning of an economic collapse. I call for a group of national work to say that we, as Lebanese, regardless of our political affiliations, need to deal with this economic crisis before the country collapses," he explained.

His Eminence expressed readiness to contribute to such a national group even if "we have to sit at the same table with people who are cursing us and are against us in order to save the country."

On the March 14 boycott of the government, Sayyed Nasrallah said "The boycott was aimed at toppling the government, but it was not toppled and will not be toppled, because all international and national circumstances indicate this."

Wrong Calculations, Syria Will Not Fall

Further commenting on the March 14 preventing of an agreement on a new electoral law Sayyed Nasrallah stated "Boycott is inflicting losses on the country and this insistence will put us before two choices: the 1960 law or no elections and both choices are bad."

Drawing attention that the March 14 is making wrong calculations, Sayyed Nasrallah noted "You are boycotting and preventing the adoption of a new electoral law. What are they betting on? That within one or two days, within one or two months, the Syrian regime will fall."
He assured these reports are not new because from the very first day, some princes, kings and presidents and their lackeys in the March 14 camp said that the regime will fall in two months.

"If you're betting on certain information, your information is wrong. Let any just person open Syria's map and see the areas held by the regime and the opposition and decide whether the regime will fall or not," the Resistance leader iterated, questioning "What is your moral position regarding the Syrian people who are getting killed, murdered, shot, thrown from buildings, killed for religious beleifs...etc. to all those who questioned us during these last two years. What is your moral position on this?"

According to Hizbullah leader, the Syrian armed opposition refuses any kind of dialogue which leads to more killing and blood. He called on al-Qaeda telling them that ""Israel" and many foreign countries set you up in an ambush in Syria and you have fallen into this ambush."

Addressing the March 14, Sayyed Nasrallah noted that "the United States wants the Syrian crisis to continue so that more people die and so that Syria will be subtracted from the regional equation."

Hizbullah Secretary General moved on to discuss the latest war in Gaza, which the Islamic Resistance in Palestine triumphed and fed "Israel" a humiliating defeat.

Sayyed Nasrallah said he was happy to see a March 14 delegation visit the Gaza Strip and congratulate it for the victory over "Israel", noting that such an attitude is an acknowledgment to the Resistance in Lebanon as well.
"Some March 14 members said they will not give up one iota of Palestine, and that is excellent," the Resistance leader praised.

Gaza, according to Sayyed Nasrallah has in fact fed "Israel" a true defeat just like the Zionist entity was defeated in 2006 July aggression on Lebanon and the 2009 Gaza aggression.

"Since the year 2000, "Israel" has been moving downwards when it withdrew humiliated from South Lebanon, and this was the first nail hammered n "Israel's" coffin, while the following nails are yet come."