Hizbullah Secretary General His Eminence Sayyed Hassan Nasrallah hailed on Friday the Palestinian resistance that defeated "Israel" in its recent aggression on the besieged Gaza strip. 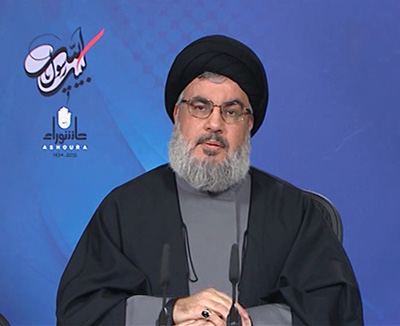 During his speech at the 9th night of Ashoura ceremony at Sayyed Shuhada complex in the Dahieh, Beirut's southern, His Eminence congratulated the Palestinian resistance that succeeded in creating a deterrent against "Israel".

"Once again blood triumphed over the sword," he said, and pointed out that "we can clearly stress that we are in front of one of the triumphs of the era of victories."
His Eminence further congratulated the Palestinian resistance and people, inside Palestine and abroad, as well as all the honorable people in the world for the victory against the "Israeli" enemy.

In parallel, Sayyed Nasrallah mocked the Zionist entity, which failed in its recent aggression.
"The "Israeli" is now wondering how to deal with other resistance groups. "Israel" hadn't planned in advance to hit meaningful targets in Gaza and had no intention of toppling the Palestinian government in the besieged strip," he said.

Moreover, His Eminence highlighted that ""Israel" was the one that waged a war and not vice versa. However, Tel Aviv failed to achieve the modest goals it had set ahead for its aggression."
"The first goal was to destroy the Palestinian resistance's leadership. He ["Israeli" Prime Minister Benjamin Netanyahu] failed in that. The second goal was to destroy the resistance's missile system. He also failed in that. The third goal was to reinforce "Israel's" deterrence power. This war actually weakened this power," Sayyed Nasrallah clarified.

Regarding the martyrdom of the Hamas military leader, Ahmad Jabari, he assured that "resistance movements in the region no longer depend on individuals."

In his televised speech, Sayyed Nasrallah added: "The lesson from the Gaza war is that resistance movements were capable of creating a balance between deterrence and terrorization of the enemy."
"The resistance's victory was not only limited to thwarting the Zionist aggression, it was also able to impose its own conditions on the enemy and refused his," His Eminence iterated.
He further mentioned that "the resistance greatest victory was that it imposed its own conditions."
"One of the greatest Palestinian resistance achievements is that the enemy now fears Gaza. "Israel" is fully aware that a war on Gaza is no longer a trip," Sayyed Nasrallah stressed.

On the military level, the Hizbullah leader confirmed that " the "Israeli" army, particularly its Air Force, was not capable of putting an end to the battle with Gaza."
""Israel" was scared of engaging in a ground war," His Eminence stated, and noted: "the "Israeli" government's move of calling the reservists came only as part of the psychological war."
Sayyed Nasrallah also iterated that ""Israel's" defeat in Gaza will prevent it from waging war on the strip again."
Moreover, he went on to say "Despite all "Israeli" efforts, the Palestinian resistance men managed to fire as many as 200 rockets a day from Gaza into "Israel" during 8- days of war."
"The resistance's missile system remained at large, and the ability of the resistance to operate it demonstrated the rockets' survival and efficiency," Sayyed Nasrallah said.
On the political level, Sayyed Nasrallah emphasized ""Israel" is aware that world cover does not safeguard it any longer, and neither does its military force, and that is why the Zionist entity is resorting to negotiations with resistance movements it terms as "terrorist"."
"This is a very good indication to the "Israeli" suffering," he said.

His Eminence also underlined that "it is enough to look on the faces of the tripartite, Netanyahu, Obama, and Lieberman to see their defeat, they were similar to the faces of Livni, Peres, and Olmert after 2006 July war."
"At the beginning of the battle, the "Israeli" leader vowed that this war will not end before Gaza begs. What was the result?! "Israel" begged," Sayyed Nasrallah confirmed.
In parallel, he stated " the resistance won the battle of biting fingers [patience] as "Israel" screamed first."
According to Hizbullah chief, "Gaza stood to impose its conditions, and didn't accept any sort of truce or ceasefire."

Addressing the "Israeli" leadership, His Eminence wondered: "If you failed to win a war against Gaza which has been under siege, what would be the case if you engage yourself in a war with someone else?"