...On the 32nd day was the surprise... This time it was midair. Six years after "the July War" (called "the Second Lebanon War" by "Israel"), the names of the southern towns are carved in the reminiscence of whoever in Lebanon, in the Arab World, and probably in the countries of the whole world observed or lived the 33 days (between the 12th of July and the 14th of August 2006).

In Aita, Maroun al-Ras, and Bint Jbeil the Islamic-Resistance fighters undertook the heroic confrontations. And in el-Hjeir Valley was the massive demolition of the Merkava tanks, which altered the "Israeli" armored dream into a nightmare. Also in Yater was the dropping of the "Israeli" military helicopter, "Yas'ur", which, since the 12th of August became known as "Maryameyn Helicopter" or "Maryameyn Valley Helicopter". 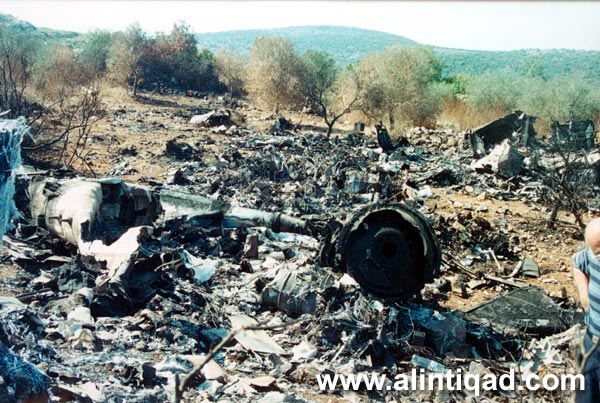 That evening, the Islamic Resistance shot the "Israeli" helicopter down onto Maryameyn Hill in the west of Yater. Originally called "Chinook" by its US manufacturer, it was named "Yas'ur" (Literally: "Hornet") by "Israel".
The Islamic-Resistance fighters reported, "It barely took a missile to shoot "Yas'ur" down!" As the fighters lurked in the west side of Yater, more than 15 troop-carrying helicopters carried out an airdrop, and every helicopter was escorted by 2 or 3 "Apache" helicopters. "Yas'ur" was actually one of those troop-carriers, and it was about to take off when a new "Waad" (Literally: "Pledge") missile hit it. Then, the "Israeli" military acknowledged the helicopter had been shot down and that five of its crewmen had been killed.

Only a few hours after "Yas'ur" was dropped, at least 5,000 shells were dropped onto Yater; the "Israelis" sought burning the entire town so as to compensate for their loss. The shelling was in vain, however.

A Zionist soldier tells this story about the dropping of "Yas'ur", "It was too dark when the helicopter landed down deep in Lebanon. We got off and headed towards our target in the west; whereas our helicopter "Yas'ur" took off towards its targets in the west. We could see its shadows by the full moon, and as we got closer to our target, we heard a sound like the one a pressurized bottle produces when opened. 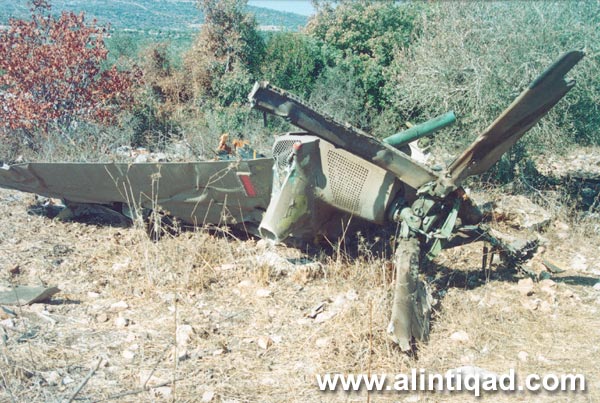 Thence, all forces air-dropped froze to watch what was going on. We saw the missile hitting "Yas'ur's" engines. The engines blazing with the reddish-yellow flames glowed in the sky, and "Yas'ur" twisted like a sinking ship. Now the fuel and the incendiary grenades it held began exploding."

The soldier added, "The whole thing took less than 20 minutes, but we needed hours to realize what had happened. Moments after the dropping of "Yas'ur", a reinforcement helicopter approached it, dropping many stun grenades to misguide missiles. However, our fear of other missiles made us cancel the reinforcement operations. The paratroopers worked on protecting the area where the smashed "Yas'ur" and the deceased corpses were while Hizbullah men were all over the zone. Because of those missiles, the airdrops planned for the night were cancelled."

On the 13th of August 2006, news of "Yas'ur's" fall headed the Lebanese newspapers, especially when that occurred amid other incidents revealing the Islamic Resistance's superiority to the enemy. Earlier, on the 12th of August, the enemy witnessed incidents unprecedented since the 1973 War; 20 soldiers and officers were killed, more than 120 others were wounded, and 39 Merkava tanks were demolished.

News of "Yas'ur's" dropping as well headed the "Israeli" newspapers. Whereas the Lebanese newspapers spoke about an achievement by the Resistance, the "Israeli" commentators and analysts censured the air forces, which had so far lost four aircraft during "the July War": "Yas'ur" and three "Apache" helicopters.
Furthermore, the Islamic Resistance shot a fifth helicopter during Maroun al-Ras-Bint Jbeil Battles. An "F-16" air-fighter was smashed while it was taking off from the south of Palestine. The air fighter was actually supposed to strike targets in Lebanon. Following that, an "Israeli" surveillance drone disappeared while above the western Lebanese heights. This data was exposed in the article of "Haaretz's" topmost commentator, Zaeef Shif, who died a year after "the July War".

Probably the performance of the air forces was really censured since they had been the most efficient forces during and after "the July War" in 2006, especially after "the 1967 War" and "the 1982 War". Therefore, the air forces constituted the primary attack forces of the so-called ""Israel" Defense Forces (IDF)". That is, "Israel" constantly sought military superiority and modernized these forces, which it regarded as the safest armament to accomplish missions. Amid the continuous "Israeli" failure during the aggression, the air forces were the enemy's only means to compensate for its losses in the other battle fields. In 33 days of "the July War", the "Israeli" aircraft launched more rockets against Lebanon than they had launched in the 1982 "Israeli" Invasion (Called "Lebanon War" by "Israel") reported the American journalist Charles Glass in one of his articles.

"Israel" had to suffer the consequences of its own work, however. The Islamic Resistance kept launching rockets against the Zionist entity, and the air forces could not achieve one of "Israel's" most important targets. The air forces' "accomplishments" were massacres and the demolition of 60% of infrastructure. In reality, the air forces could not at all harm the Resistance's missile arsenal; this was clearly stated by the report of "the Winograd Committee", which criticized the air forces, "...The airstrikes caused casualties to a great number of civilians without annihilating Hizbullah."

Fearful that the Resistance now possessed anti-aircraft missiles, the "Israeli" aircraft was somehow influenced; the aircraft avoided flying at low heights so as to escape the Resistance's fire. Thus, the "Israeli" ground forces lacked provisions and ammunition, reported one of the Russian-speaking "Israeli" news websites. After "Yas'ur" was shot down, the enemy avoided sending helicopters carrying commando forces on board. 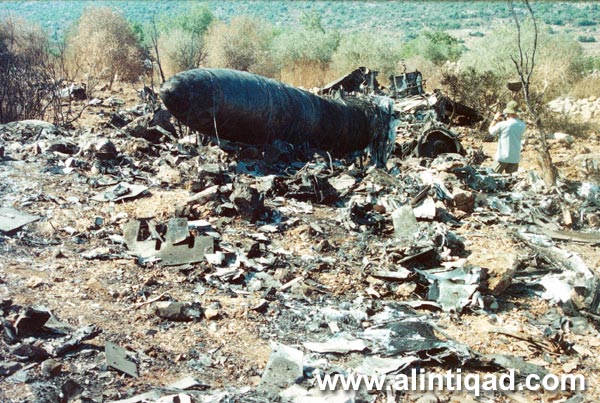 The Resistance's surprises on land, in sea, and in air outlined victory; whereas the "Israeli" enemy suffered total disarray. Not only did the air forces fail to shape the end of the battles, but also they were unable to achieve a huge part of the targets. The enemy in fact declared that the "Israeli" military forces had earlier avoided some limited military operations just because they believed they had no solution for the problem of the armory and the air forces. Now the situation was completely different; developed anti-armor missiles could actually demolish armored vehicles while the air forces were unable to shape the end of the battles.

"Yas'ur" is a type of "the Chinook CH 47" helicopter designed by the US "Boeing". Chinook (Literally: "Fierce Winds") is one of the huge troop-carriers, and it was first used in "the Vietnam War" in 1966. It is 22 m long and 4 m wide, and it has enough space for 64 soldiers and their ordnance. "Chinook" is also hangar for "Hummer" vehicles and "M-113" troop-carriers. In fact, the helicopter shot with a mortar shell while carrying out an airdrop in Ansariyeh in 1997 was a "Chinook".

About shooting "Yas'ur" down on the 12th night of August, an Islamic-Resistance fighter reports the following account to "al-Intiqad": "More than 15 helicopters were carrying out an airdrop in Yater, for the forces on board thought that the zone has already become clear after the violent shelling. So we dragged them and besieged them. Suddenly appeared a new convoy of helicopters escorting a huge helicopter, on board of which were many soldiers and much provisions. Exactly at 9: 40 p.m. on Saturday night, a fighter really faithful in Allah launched a "Waad" (Literally: "Pledge") missile, so "Chinook" or "Yas'ur"- like the enemy calls it - exploded in the sky. Then it exploded again before falling onto the ground since it was full of ordnance and ammunition. The blazing pieces were scattered along a half-km2 area at least." The fighter continued, "We began to praise Allah over and over again, and the town hills echoed our praises. The situation was so breathtaking that we did not even care for the barrage of the enemy's aircraft and artillery. But none was hurt, praises be to Allah."


The fighter added, "We kept doing our jihad, fiercely shelling them and preventing them from approaching the place where "Yas'ur" had fallen and from gathering the scattered pieces of their soldiers' corpses. With the crack of dawn, they covered the operation zone with thick smoke in an attempt to gather the pieces of their decease soldiers. And we further shelled the area and clashed with the enemy soldiers, whose screams we could hear as they moved back and hid beneath the thick shrubs near Maryameyn Hill in the west of the town." Another fighter taking part in Yater confrontations said, "About 20 soldiers were killed during the confrontations occurring in that zone, and at least 17 others were burned on board of the helicopter demolished."