One of the most important factors in Hizbullah's military success and resistance against "Israeli" aggression imposed on Lebanon lies in their strategic and clandestine military positions and outposts throughout Lebanon. 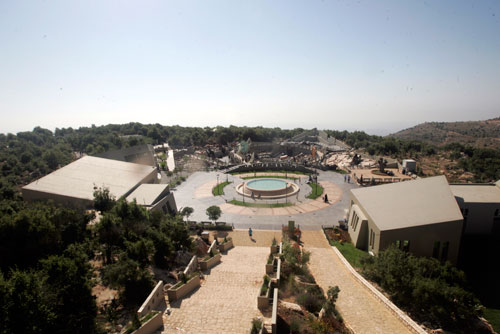 Just over one year ago, in May of last year, for the first time in Hizbullah history, Hizbullah decided to open one of their clandestine military strong holds into a museum called Mleeta, which allows visitors from all over the world to experience and learn about the resistance way of life and their struggle against "Israeli" occupation, aggression, and terrorism. Since its inception, the museum has been booming with visitors and tourists from all over Lebanon and the world.

Held high above the surrounding villages and towns in South Lebanon, Mleeta is located in Mount A'mil and is part of the village of Iqlim al Tuffah. Mleeta's highest peak is positioned at 1,060 meters above sea level and served as a catalyst for the resistance to clandestinely launch military operations within the "Israeli" established security zone during a majority of the "Israeli" occupation. 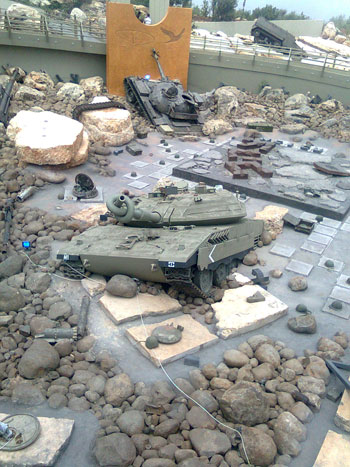 Upon entering Mleeta, visitors are met with an impressive display of architecture and design that allows all to see what the Lebanese are faced with in times of war. The first major exposition beginning the museum tour is titled "The Abyss," showcasing Hizbullah's victory against "Israeli" occupation and the most recent war in July-August 2006.
Covering an area of over 3,000 square meters, Hizbullah showcases "The Abyss," with heavy "Israeli" military equipment which emulates that of a war-torn battlefield. The military equipment was retrieved by Hizbullah resistance fighters in Lebanon during and after their long and arduous battles fought against the "Israeli" military.
Symbolically positioned in the center of "The Abyss" is the "Israeli" Merkava IV Tank, placed next to a tombstone, marked with the Hebrew abbreviation for the ""Israeli" Defense Forces", IDF. The Merkava IV Tank was "Israel's" most impressive war machine that served the "Israeli's" very well during their occupation in Lebanon, but not during their last venture into Lebanon during their most recent war with Hizbullah.
Impressively, the Merkava IV Tank is half-sunken in the ground, surrounded by dirt and rocks, sitting immobilized with its cannon knotted. This symbolic display in itself highlights Hizbullah's strength in militarily shell-shocking the IDF, defusing their military tactics, as well as the IDF's strong points. The display reveals that what was once "Israel's" strength and power (the Merkava IV Tank) had become their weakness, hence, the intense "Israeli" bombing campaign that resulted in the deaths of over 1,300 Lebanese civilians in 2006.

Surrounding the Merkava IV are other tanks mirroring the destruction of "Israeli" tanks seen in photographs taken shortly after the 33 day war ended. Scattered around the tanks are "Israeli" military equipment such as artillery shells, bullets, weapon caches, and helmets. 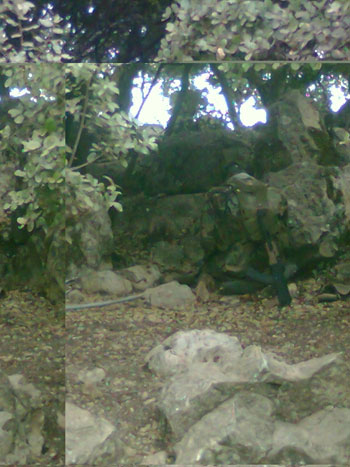 Subsequent to the "The Abyss," lies "The Pathway," a course densely surrounded by trees and rugged terrain, which conveys to visitors the personal efforts and journey resistance fighters experienced in defending Lebanon.

"The Pathway" is 250 meters in length and covers an area that served as a catalyst and base for the resistance. The rugged terrain surrounding Mleeta allowed Hizbullah leaders and resistance fighters to conduct military operations, plan military attacks, as well as house the injured or sick resistance fighters during times of war.

Along the path, which has been reconstructed to allow visitors to safely walk along the same labyrinth course as resistance fighters, one can understand how the resistance was able to launch hundreds of military operations and remain unseen from the IDF and IAF ("Israeli" Air Force), as their positions were heavily camouflaged by the natural mountainous terrain.

One of the founders of Hizbullah, Sayyid Abbas al-Mousawi, frequently met and encouraged resistance fighters, as he was stationed at Mleeta during his struggle in expelling the occupation. As visitors walk along the pathway they will notice a barricade where Sayyid Abbas al-Mousawi often prayed and read supplications or Dua'a, as said in Arabic. 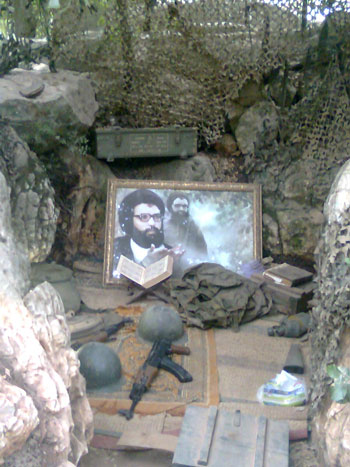 Displayed within his barricade, which is densely camouflaged to blend in with the natural surrounding landscape, are the Holy Quran, a prayer mat, a telephone to communicate with the resistance, an array of AK- 47's, ammunition caches, and other military equipment and apparel such as a canteen, backpack, military jacket, and helmet.
As visitors walk further along the pathway they are able to witness firsthand the areas in which the resistance operated. Blocked-off by barb-wire, rocks, and sandbags are fortified bunkers, entrenchments, a medical center, and numerous military operational centers that display Hizbullah's cunning military power, prowess, and might.

Once at the end of "The Pathway" visitors enter "The Cave," which reaches up to 200 meters deep into the side of the mountain. To accommodate visitors, Hizbullah decided to enlarge the cave walls from its original width in order for visitors to easily walk-through and feel comfortable during their museum experience. Once inside, visitors will immediately notice a change in air temperature and if they place their hands against the cave-walls, they will notice, in some spots, water drops permeating through.

There are numerous rooms built within the cave, serving as a long-term safety shelter from "Israel" during times of war and during the brutal weather that hits the region through the cold winters and hot summers. 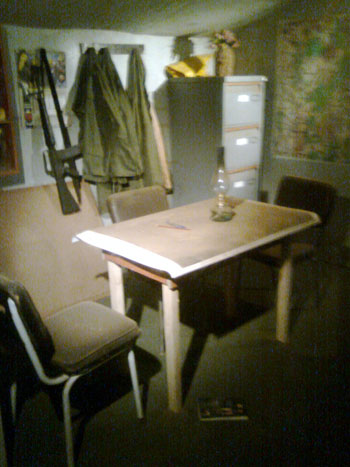 For the kitchen, it is equipped with a sink, a small refrigerator, table, and shelves which served as cabinets and storage. It was at Mleeta that over 7,000 resistance fighters spent their days stationed away from their families, struggling trying to build their future with resistance in order to be free from occupation. The continuous efforts of Hizbullah can clearly be seen as the cave was hand-dug by over 1,000 members of the resistance in which it took them 3 years to complete.

Once outside of "The Cave," visitors are able to walkout and step upon a large platform balcony called "The Outlook." The balcony overlooks numerous towns and villages that were liberated by the resistance in 1985. The view from "The Outlook" is breathtaking no matter what time one visits Mleeta. Surrounded by dense trees on all sides, families and friends may take photographs and gaze upon the stunning mountainous landscape Lebanon has to offer. 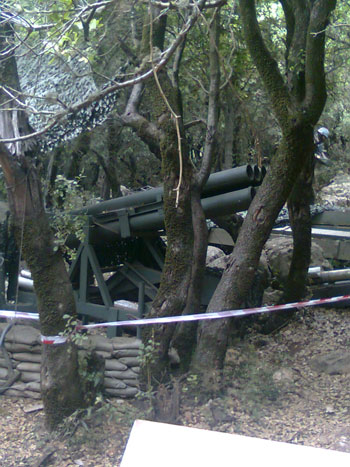 Once past "The Outlook," visitors proceed to "The Line of Fire" where numerous Hizbullah heavy military weapons are camouflaged and displayed neatly among the bunkers and entrenchments. Weapons include short, long-range, and surface to surface missiles that were all utilized to deter and impede "Israel's" success and aggression against Lebanon. Some of the weapons that are displayed include Katyusha rocket launchers and Grad rocket launchers.

Once towards the end of the tour, visitors are able to rest on benches in "Liberation Square," where Hizbullah displayed other sophisticated weapons also utilized during their wars against "Israel" such as the Fagot, which is an anti tank guided missile system, the TOW or Tube launched Optically tracked Wire commanded missile system, and RPG-29 (Rocket Propelled Grenade Launcher).

Also, in "Liberation Square," displayed upon a glass slab is part of a speech, both in Arabic and English, in which Hizbullah Secretary-General Sayyid Hasan Nasrallah gave to the people of Lebanon during the days of war on July 29, 2006.

The speech states the following: 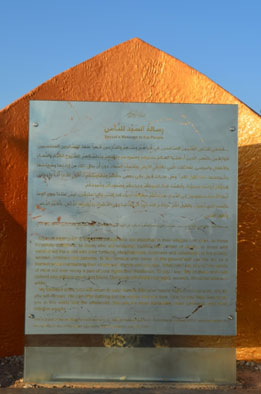 My message goes to the good people who are steadfast in their villages and cities, to those forcefully displaced, to those who are enduring, trustful, and certain of victory, to those who astonished the world with their fortitude, steadfastness, trustiness and coherence, to the elderly, women, children and patients, to the families who sleep on the ground and use the sky as a blanket while maintaining their strong will, dignity and courage. What can I say to you? No words of mine will ever repay a part of your rights and resistance. To you I say: ‘My brothers and I will defend you with our souls and blood. Our souls will shield your tears, wounds, steadfastness and pride.'

My beloved ones, you will return to your homes with your heads held high proud as ever, and so you will remain. We can offer nothing but the victory that you love. I say to you: May God repay you in this world and the afterworld. You are the most honorable, most generous and most virtuous people."

Following "Liberation Square" is "The Exhibition," showcasing the presentation of dozens of sophisticated "Israeli" weapons that were collected since 1982; also among "The Exhibition," room is a display of "Israeli" sleeping bags, army boots, canned food, helmets, bullets, ammunition caches, and magazine clips.
Additionally, inside "The Exhibition," Hizbullah neatly mapped out the complex "Israeli" command structure and its various divisions. Moreover, along the wall, Hizbullah displayed a large map marked with coordinates and satellite pictures of important locations within "Israel" such as sea ports. The various displays that can be seen in "The Exhibition" allows visitors to view the weapons that the "Israelis" used during their occupation and wars in Lebanon. It also demonstrates that Hizbullah has the intelligence and capability to defend and protect Lebanon if another war arises with "Israel". 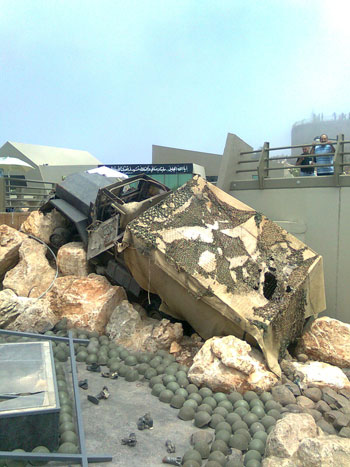 The last two exhibitions at Mleeta are the "Multi Purpose Hall" and "The Hill." In "The Multi Purpose Hall" visitors may watch a short video screening of combat scenes between Hizbullah resistance fighters and the IDF, as well as scenes of liberation from areas in Lebanon such as Khiyam prison.

Finally, "The Hill," is a wide-open area where visitors may sit and rest to view the surrounding valleys, villages, and towns liberated in 2000. If it is a sunny day with a cloudless sky, visitors can sit and gaze upon a scene that is worth more than a thousand words; they can see as far as the eye can see. If visitors visit Mleeta during the evening sunset, on some days, especially in the evening when the clouds descend, they will literally be standing high above the clouds. All they will see is a blanket of white clouds that reflect the beautiful sunset, and thus, this is "Where the land speaks to the heavens," as Mleeta's motto states.
Within the center of "The Hill," is a display upon a plaque titled "Tribute to the Martyrs," that is both inscribed in Arabic and English. The words displayed upon the plaque are heavily eloquent and signify the importance and holy-sacrifice the Lebanese have given in order for their nation to live free and independent from "Israeli" occupation. 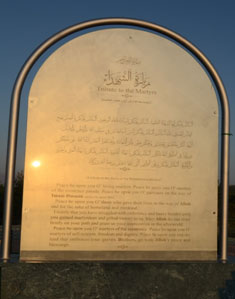 The tribute states the following:

Once the museum tour is complete with "The Hill," for those visitors who are interested in buying memorabilia may do so at Mleeta's gift shop located near the entrance of the museum. Visitors may also take time to pray in the prayer room which is located behind the Administration building. 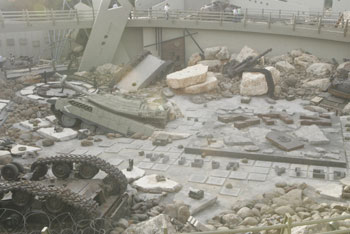 With Mleeta being Hizbullah's first major museum bringing the resistance way of life to surface, after visitors and tourists complete the museum tour, they will have a better understanding of how the Lebanese have adapted in order to combat and deter "Israeli" occupation and terrorism. Furthermore, after completing the museum tour, visitors should understand the importance of Hizbullah's role in society in the way its members sacrifice, respect, and honor the Lebanese who have remained steadfast and virtuous during the hardships they faced due to "Israeli" occupation, aggression, and terrorism that has challenged Lebanon for over 20 years.