On the Divine Victory's fourth Anniversary, destiny played its role to complete a perfect victory that would give more grace to the yearly-celebrated event, and again the naïve enemy flopped to repair its collapsed international image by simply avoiding violence for a short period.

Despite the Zionist occupation's efforts to disturb the Lebanese on their festive day, they highlighted instead this day's greatness and encouraged not only Lebanese but also Arabs to take part in any practical action that would overwhelm the enemy. 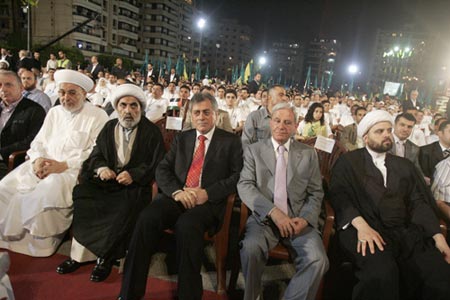 In addition, it overthrew all claims promoting that the resistance's arms are the cause of trouble, but instead "Israel" is a terrorist "state" that could only survive on bloodshed.

In a ceremonial, exiting, and revolutionary atmosphere, the Lebanese and Arabs welcomed their big day to celebrate their Divine Victory and their suppression of "Israel's" attempt to stir up internal Lebanese incitements. They celebrated the day that practically demonstrated the Lebanese Army, People, and Resistance equation.

From the center of the re-constructed Southern Suburb, they came out to remind the enemy of their unlimited determination, their devotion to the righteous path the martyrs drew, and their attachment to their life and land.

Druze Sheikh Fawzi Koukash of the Tawhidi Labor committee reassured to the enemy that, "Whatever it takes, we support the resistance and we support Sayyed Hassan Nasrallah." As for the "Israeli" aggressions in South Lebanon Koukash told moqawama.org "these are typical "Israeli" violations that we always expect." 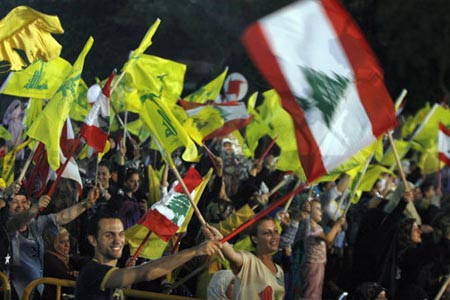 While Change and Reform Parliamentary Bloc MP Abbas Hashem proudly praised God, as this victory was once again strengthened with the firm Army, People, and Resistance equation.

"The army highlighted today that it will not stay hand folded in face of occupation or violation, and by that, let the enemy know that this is a beginning that threatens its occupying entity," he added.

Hashem pointed out that the occupying enemy has retreated from the borderlines, while the resistant people wander around the Southern lands holding Lebanese flags up to prove they are fearless.


Lebanese citizens of all generations came from the various Lebanese regions to take part in this celebration. Mazen D. from Beka'a greeted the courageous Lebanese Army and resistance, and assured that the enemy would now think twice before taking any action inside the Lebanese territories. On the other hand, Hussein H. thanked the Lebanese Army for its efforts in capturing "Israeli" spies in Lebanon and its efforts in confronting this enemy.

For her side, Safaa A. from Jbeil was completely certain that, "No matter how big the Zionist enemy's potentials are, we are stronger because we are defending our right. Moreover, what happened in the South reassured that "Israel" is the terrorist."

Safaa called on everyone who still does not recognize "Israel's" criminality to open their eyes and realize the importance of uniting against it. While Zahraa R. the 17-year-old coming from Nabatieh enthusiastically reassured that "as long as there is the resistance, resistance fighters, and Sayyed Hassan Nasrallah, God will protect us and remembered Sayyed's repetitive statement saying that ""Israel" is weaker than the spider web".

Furthermore, Lebanese immigrants visited their country to join this celebration. Amira A. who left Lebanon during the "Israeli" aggressions in 2006 came accompanied with a group from Venezuela to thank the Venezuelan president Hugo Chavez from here, the land of the resistance, for his support to the right, and to tell the Lebanese that Venezuela shares with you enthusiasm and celebrations.

As for Hassan G. a Lebanese immigrant in Germany who came specifically to celebrate this day, he called on Lebanese to ignore political incitements that distract from confronting the enemy.

"This is an oath in front of God for our martyrs who sacrificed with everything and left behind one will. To them we pledge to preserve every single drop of blood that fell for liberating our lands," he said.
Hassan assured that the enemy does not have the ability to achieve any of his goals anymore. "The dawn of victory began," he pointed out, and assured, "our goals are the ones that will be achieved from now on." 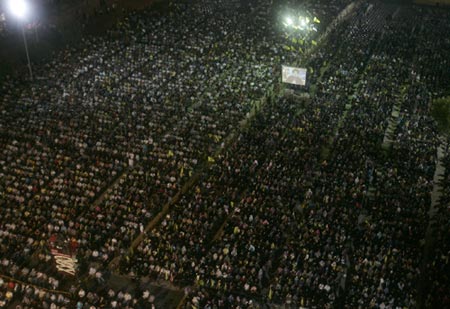 On the other hand, Al Akhbar news editor Kassem Kassem assured that the martyrdom of his colleague Assaf Bou Rahhal on the "Israeli" soldiers' hands was not surprising, as this is the typical "Israeli" action that does not neutralize journalists and civilians from the fight.

Al Akhbar reporter in the South, Assaf Bou Rahhal was killed on Tuesday, after "Israeli" soldiers violated the Lebanese borders, which lead to clashes between the Lebanese Army and the occupying entities' forces.

""Israel" does not consider international laws on the safety of journalists and neutralizing them from the fight. When "Israel" is included, all possibilities are there," Kassem said.

Al Akhbar news editor proceeded, "We got shocked losing a colleague we daily communicate with." However, Assaf Bou Rahhal, , "for sure considered the probability of being targeted while covering such an incident related to "Israel", and being the son of the South he was ready for any sacrifice in face of "Israel"."

Regarding the Arab Parties Conference that chose Lebanon as a host country this year, a participant and head of the Media Bureau in the Arab Socialist Movement-Syria, Rawda Ali pointed out that the yearly conference was held in Lebanon because it is the resistance country.

"The 2006 war proved that the fierce "Israeli" enemy who claims it is undefeatable, was actually defeated and crushed by the resistance and its fighters, and by the brave Lebanese people," she added.