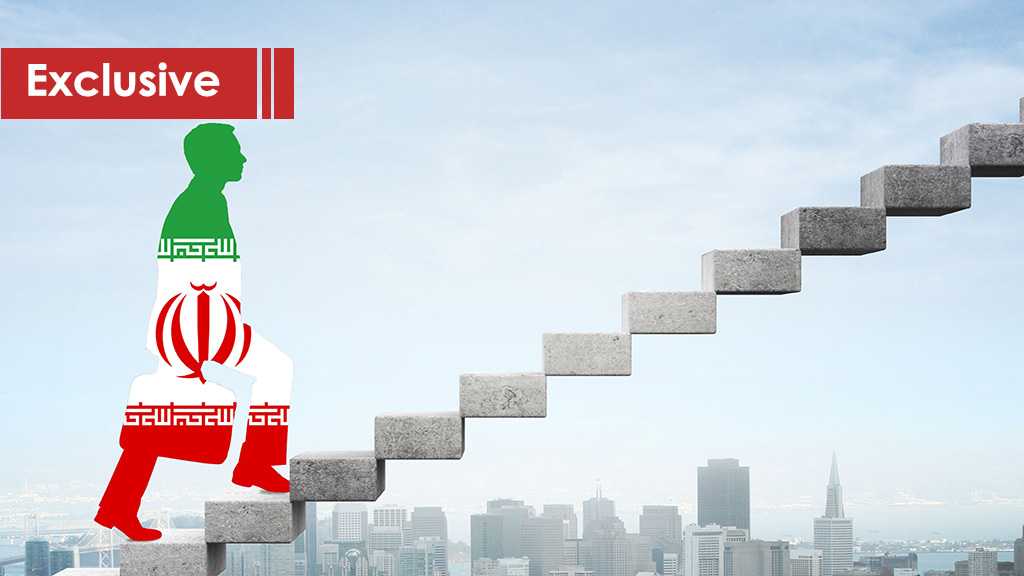 A heated debate has been going on about the outlook of Iran in the coming months. Foreign policy, the economy, and the domestic social and political state are the areas that can shape Iranian society and future. Looking at the political and geopolitical status of the world today, it is impossible to see the world order without Iran among the major players. Iran has been able to maintain stability in the region in face of terrorist groups (supported by the US, Saudi Arabia and their allies), as well as improve relations with allies, neighbors and EU countries in particular. Iran has been able to preserve its internal security despite the many attempts to cause unrest through foreign-backed terrorist attacks or planned violence.

Protests that did not last

With the beginning of 2018, Iran witnessed economic hardships that led to protests here and there across the country. The protests basically started only a few days before the beginning of 2018. However these soon turned into violent protests, which prompted the public to back down. People wanted economic reforms; let us be frank who does not want reforms on this planet? It is not unusual for people to protest in Iran or sound their opinion as long as no violence or breach of law is carried out. The Iranians did not want to start an Iranian spring or carry out a coup d’état. But when protests were infiltrated by hooligans who took to the streets and destroyed public property and harmed citizens, Iranians took a step backward and decided to unite and protect their home country. If you live among Iranians for a while, you will understand that it is not easy to cause division among them; their national identity and long history glues them together tightly whenever there is the slightest attempt to cause unrest in the country.

Now back to the protests that did not last long. American President Donald Trump along with US hardline officials blatantly expressed their support to the violent protests that were orchestrated by anti-Iranian groups abroad and inside Iran.  Persian-speaking mainstream media outlets such as VOA, BBC Farsi were putting fuel on the fire. Foreign attempts to meddle in Iran’s internal affairs is not surprising; Iran has long been subject to foreign interference, from the American- and British-led coup in the 1950s to more recent efforts by the United States and the "Israel" apartheid regime to sabotage Iran’s nuclear program.

In January 2018, US State Department officials said in a statement that the United States was communicating with anti-government protesters through its Facebook and Twitter pages in Farsi, and was encouraging them to demonstrate. Social media pages, particularly Telegram which is widely used in Iran, were instigating people to attack certain places, burn centers, damage public property, and were teaching people how to make home-made Molotovs. The most notorious of these social media outlets was Sedaye Mardom (Farsi for the voice of the people), which is well-known to being orchestrated from outside Iran. The short-term chaos came to an end; people were tired of the economic situation that is caused mainly by US harsh sanctions in addition to incorrect economic policies to which Iranian President Hassan Rouhani admitted. The US sanctions prevent patients suffering from cancer, diabetes and other diseases from receiving treatment. The US administration, US officials, "Israeli" regime officials and Saudi Arabia from the Arab Peninsula kept their anti-Iranian campaigns ongoing. Other attempts to cause unrest or breach Iran’s security were carried out, such as the Ahvaz attacks South of Iran. The attacks came after the US-backed campaign to stir up unrest in Iranian cities fell flat.

Sanctions not as effective as Trump said

On May 9, Trump withdrew from the nuclear deal and promised he would crush Iran’s economy. The European Union, for the first time, explicitly expressed its uneasiness towards the US administration’s decisions and attitude towards Iran. In August 2018, the EU vowed to thwart Trump’s sanctions on Iran. On August 4, Senior European officials castigated US President Trump's renewed sanctions on Tehran as “illegal” and in violation of a UN Security Council resolution and they vowed to intensify efforts to thwart the US measures and preserve the Iran nuclear accord. The US administration, with its multiple and successive attempts was trying to keep Iran outside the world order but all its attempts are to no avail. Days before US sanctions took effect on Iran’s oil sector on November 5, India decided it will continue Iranian oil imports post the US sanctions and said it may revert to paying Iran in rupees for the oil it buys. Also, China reported it was set to keep buying oil from the Islamic Republic. According to reports, Iran’s GDP growth in 2017/18 dropped to 3.8 percent as the effect of a large surge in oil revenues in the previous year dissipated. However, an overwhelming majority of growth came from the non-oil sectors out of which more than half can be attributed to services growing by 4.4 percent. Eventually, Iran’s economy is not doing great but there has been no crushing to the economy as Trump claimed.

Now as for Iran, despite all foreign attempts to meddle in its internal affairs and darken its domestic image, reports have said that Iran remains to be among the safest destinies for tourism across the world. Iran generally has a positive track record on internal security. Though Tehran’s very active role in defeating the so-called Islamic State (IS) has made the country a target for extremist attacks.

Now aside from the protests and sanctions, we turn to the regional and international roles Iran has been playing. Since the JCPOA, Iran and EU relations have been moving towards better normalization. That has made three players unhappy; the United States, the "Israeli" apartheid regime, and Saudi Arabia. Even after Trump decided to rip up the deal, the three players seem worried about the gradual empowerment of Tehran and continue to use all instruments at their disposal to antagonize Iran.

Iran has proved its constructive role in preserving security in the region. It has been taking part in multiple talks with Russia, Turkey, and other players to help restore stability in Syria and bring the terrorist groups to an end. Iran has been in Syria on an advisory military capacity since the conflict erupted in the country in 2011. Russia joined the battle late in 2015. The two countries intervened in Syria at the official request of the Syrian government. In August 2018, Iran and Syria signed an agreement on defense and technical cooperation during a visit by Iranian Defense Minister Amir Hatami who reiterated Tehran's commitment to the Arab country's security. Iran has been providing advisory on how to deal with the Western-backed terrorist groups in Syria. Of course, such strong presence makes the "Israeli" regime angry. Over the past few years, and during 2018 in particular, the "Israeli" regime has frequently attacked military targets inside Syria in an attempt to prop up terrorist groups that have been suffering defeats at the hands of Syrian government forces. Tel Aviv has also been providing weapons to anti-Syrian militants as well as medical treatment to the terrorist Wahhabi elements wounded in Syria. During the same period, Hossein Amir-Abdollahian, the Iranian parliament speaker's special adviser on international affairs, said Tehran will keep up its "decisive support" for the resistance and will not give in to pressures as regards the Palestinian issue and "Israeli" regime’s threats against the security of the regional countries. December 2018 seems to witness the culmination of the US destructive war in Syria hopefully, as the US pulling out of Syria is actually big news.

Also, Tehran has been playing an important role in supporting the Yemeni people, while thousands in the gulf country including infants suffer severe famine due to Saudi siege and war imposed on the Yemenis. Iran has always welcomed intra-Yemeni negotiations for positive achievements toward peace, stability and security in this county. Iranian officials have also supported global awareness about the calamities of the Saudi-led war on Yemen, expressing hope that it would help end the war in the country. In addition, Iran has also improved its relations with its neighboring countries, has been managing to keep terrorists from infiltrating the country through Pakistani borders, ameliorated bilateral relations with many players across the globe and aimed at preserving stability in the region in face of ongoing "Israeli" threats to surrounding countries.

Trump and MBS; a slap in the face

Now with friends like Mohammad bin Salman (MBS), the US does not need enemies. MBS and the Saudi kingdom have succeeded in embarrassing and isolating the US on the international arena. Saudi Arabia is one of the United States’ most important allies in the Middle East. Of course, Trump’s support to MBS and his milking of the Saudis while neglecting every other aspect does not make things better for Trump. The duo makes things look and work out better for Iran.

This is how The National Interest has described MBS and his kingdom: “the Kingdom of Saudi Arabia is ruled by an immature authoritarian known mostly for his myopia, ruthlessness, brutality, recklessness, ambition and arrogance. His misadventures are legendary: the murder and dismemberment of a self-exiled (Jamal Khashoggi) in a Saudi consulate; the brazen kidnapping of Lebanon’s prime minister; a busted campaign to isolate and invade Qatar; and a promised speedy invasion of Yemen that transformed into nearly four years of war—so far. Riyadh underwrote radical jihadists in Syria and Yemen, after spending decades promoting fundamentalist Wahhabism around the world. The royal regime also backs tyranny in Bahrain and Egypt with money and troops.”

It is difficult to have an impact on public opinion. With the tremendous amounts of money pumped into the media business, it becomes easy to fabricate facts and realities. However, Trump, along with his Saudi allies, has succeeded to push the public opinion farther. This comes especially as Trump did not respond with appropriate outrage and inflict effective retaliatory measures on Riyadh after the vicious killing of Khashoggi, but rather explicitly said that Saudis give the US a lot of business. This Trump-MBS misadventure has also emphasized who the real terrorists are.

Now for Iran, it is important to know that the free will of the people is a major element that affects almost every aspect of the Iranian big picture. Also, if Iran ever decides to change its policies, it will have nothing to do with Trump or anyone in the White House or elsewhere.

To some extent, developments in regional and international relations during the past year have compelled all Iranian political sides to show unity and to cooperate on regional issues. Since the implementation of the nuclear accord, also known as the JCPOA, Iran has been normalizing relations with the rest of the world, especially the European Union. Trump’s ripping up of the deal seems to contribute in proximity between international players including Iran while alienating the US. Also, it is true that the oil and gas sector remains to be the backbone of the Iranian economy; however the question to how things can develop with the EU and other countries remains open. The Iranian economy might not be in a growth cycle, but the sanctions have pushed Iran to focus more on the non-oil sector, tourism, health tourism and IT start-ups which can become a game changer in Iran’s economy by increasing job opportunities and decreasing inflation. Bottom-line: Trump can try to harm Iran’s economy but cannot crush it. And NO, there will be no world order without Iran.