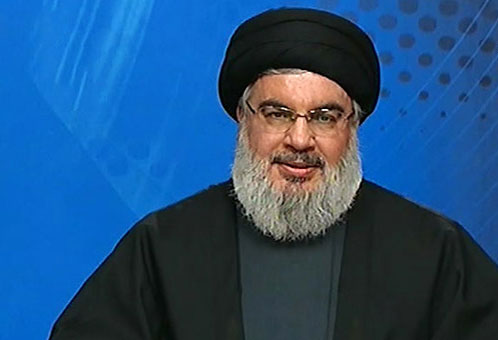 "We condemn the vicious attack at the hands of takfiris in the Saudi region of al-Ahsaa and we extend condolences to the martyrs' families," he said, stressing the importance of countering terrorism.

"This is a dangerous incident that highlights the need to address the roots of terrorism and boost security measures."

On another level, His Eminence condoled the Palestinian people, particularly the Hamas Resistance movement, over the martyrdom of Qassam brigades' fighters in a tunnel collapse in Gaza.

"We salute all the men who are guarding the country's borders ... We bow to the patience and endurance of the army's officers and soldiers and the resistance's fighters. The Lebanese must appreciate these men's efforts."

Moving to the issue of Lebanese Presidential issue, Sayyed Nasrallah elaborated: "We refrained from addressing the presidential issue in the media because this issue requires direct action and communication. It must stay away from overbidding, incitement and blackmail."

In response to the accusations that Iran is paralyzing the Lebanese Presidential file, he stressed: "Iran, the powerful country in this region, doesn't need the issue of Lebanon's presidential vote to solve its nuclear program."

According to His Eminence, "If Iran wants to hinder the presidential elections in Lebanon, then it should have utilized this issue in its international relations."

As for the issue of Iranian democracy, Sayyed Nasrallah highlighted: "Iran has organized more than 35 elections in the past 37 years and the polls were never suspended, despite the wars and bombing. The Islamic Republic conducted elections even during Saddam Hussein's aggression, backed by the US and the Saudis..."

"We in Lebanon are searching for any excuse to postpone the elections and we don't have a constitutional authority to address the differences," he asserted, noting that "the Expediency Discernment Council has granted Iran what it was aspiring for at the political, industrial, military and technological levels."

On this level, the Hizbullah Secretary General revealed that Tehran has stressed that the presidential issue is a domestic affair and that it would support what the Lebanese would agree on.

Meanwhile, His Eminence responded to all accusations regarding the presidential elections.

"Hizbullah has been accused that it is seeking bargaining over the issue of the election and that it wants something in return for facilitating the vote. They alleged that we want a constituent assembly or a greater share in state institutions. When I spoke of a settlement I mentioned concessions and I noted that it would abide by the Taef Accord, but some parties resort to animosity and use all illegitimate means."

"Our alliances are not only based on political interests but also on trust and friendship. We meet over common principles and this political camp does not have a sole leader. We organize disputes among us in a friendly and respectful manner," he explained.

His Eminence further noted that "on some levels, we refrain from informing our allies, so not to embarrass them by some subjects such as going to Syria, and our stance from the brutal Saudi aggression on Yemen."

"Our alliances are not based on strategic interests, but on trust, friendship, and love away from buying and selling," he mentioned.

He also clarified that "in the last stage, since the beginning of the presidential election, the other side worked on creating dispute with our allies."

On this level, Sayyed Nasrallah confirmed that the relationship between Amal and Hizbullah is based on trust mutual respect, trust, dialogue and almost daily talk.

"Our relation with Amal movement became a model in Lebanon and the region."
Regarding the relation with the Free Patriotic Movement [FPM], Sayyed Nasrallah highlighted that "since the signing of the understanding, they are working to hit the relationship between the FPM and Hizbullah."

"With the beginning of the presidential issue, Hizbullah's leadership mulled its choices and we unanimously agreed that General Aoun is naturally a candidate who enjoys the needed characteristics. Based on these characteristics and our political vision, and out of loyalty to General Aoun's stances, we decided to back this nomination and we discussed the issue with the allies."

His Eminence recalled that the FPM-Future dialogue preceded Hizbullah's public support for this nomination. "Since the beginning of the presidential elections, we reached the result that General Michel Aoun is our candidate. This was based on certain merits and political vision. We backed the FPM-Future dialogue because we want to have a president."

The Resistance Leader also explained the aspects of Hizbullah's relation with former minister Suleiman Franjieh, calling him "the eye light".

"Our relation with former minister Suleiman Franjieh is out of talk. He is our ally and old dear friend. The trust between us is strong ... When he told us about the Paris meeting, as asked him to be cautious because certain parties might seek to sow discord between him and Aoun or between Hizbullah and Aoun. When Franjieh asked about our camp's response if the proposal was serious, we told him that that would be a new development that we would have to discuss with General Aoun."

In face of a new reality that is the nomination of Hizbullah's ally, minister Franjieh, by the Future party, Sayyed Nasrallah uncovered: "During the meeting with the minister Franjieh, we told him to wait and pay attention because it may be that the other team wants to create dispute with General Aoun or between Hizbullah and General Aoun."

He further unveiled "We told Franjieh that we are committed to back Aoun for presidency, but we will discuss the issue of nominating Franjieh himself [by former PM, the Future leader, Saad Hariri]."

"We told him that we trust him and that we believe that he has the needed characteristics while noting that we are politically and morally committed to Aoun's nomination and that the issue needs to be discussed with him," His Eminence mentioned.

Noting that the way Hariri went about his initiative to back Franjieh was wrong, and problematic for Lebanon, Sayyed Nasrallah declared that he doesn't believe the leaked information regarding the Paris meeting with the Future party leader. "I believe minister Franjieh."

However, he stressed that leaking the nominating of Franjieh [by Hariri] was wrong because it was then politically utilized by powers within March 14 camp

On the Lebanese Forces' nomination of Aoun, Sayyed Nasrallah stated that his party welcomes any approach or agreement between the Lebanese factions.

His Eminence went on to say: "We aren't embarrassed. We are morally and politically committed to the nomination of General Aoun unless he decides to withdraw from the race."

"If we guarantee that Aoun will be elected president tomorrow, we would go to parliament and take part in the elections and we would not demand a package settlement, a constituent assembly or constitutional amendments," he said, pointing out that "our demands from the package settlement have been fulfilled seeing as both candidates are from March 8."

He also said: "If a year and a half ago, we gave our agreement and commitment to minister Franjieh, our position today would have been to be committed to him."

In conclusion, Sayyed Nasrallah called for dialogue and discussion between the Lebanese factions in a bid to reach an agreement on the presidential vote.