Leader of the Islamic Revolution His Eminence Imam Sayyed Ali Khamenei described the North Atlantic Treaty Organization [NATO] as “dangerous,” saying that the US-led military alliance knows no boundaries and had to be stopped in Ukraine or it would have eventually started war using Crimea as a pretext.

Imam Khamenei made the remarks while receiving Russian President Vladimir Putin, who arrived in Tehran earlier on Tuesday to take part in a three-way summit with Iranian and Turkish presidents Sayyed Ebrahim Raisi and Recep Tayyip Erdogan on the Syria peace process.

“War is a harsh and difficult reality, and the Islamic Republic will in no way be happy if it entangles ordinary people,” His Eminence said.

“In the case of Ukraine, however, if you had not taken the initiative, the opposite side would have caused [the outbreak] of war with its own initiative,” Imam Khamenei told Putin.

His Eminence also stated that Western countries resolutely oppose a strong and independent Russia, adding that if NATO had not been stopped in Ukraine, it would have started the same war using Crimea as a pretext.

The Leader additionally said the US and West have become weaker than before, adding that despite great efforts and spending, “their policies in regional countries, including Syria, Iraq, Lebanon and Palestine, are being less effective.”

He underlined that Iran and Russia must maintain their vigilance in the face of the West’s deceptive policies.

Imam Khamenei also emphasized that economic cooperation between Tehran and Moscow is a necessity and will serve the two sides’ interests, particularly in the wake of the West’s sanctions against them. “Long-term cooperation between Iran and Russia will be deeply beneficial to both countries.”

The Leader said it was paramount that the oil and gas agreements currently in the works between the two energy-rich countries are “followed through to the end and become operational.”

The Leader also stressed the importance of launching Rasht-Astara railway in an effort to complete the North-South Transport Corridor and benefit both countries.

Imam Khamenei voiced support for the policy of replacing the US dollar with national currencies in bilateral trade ties, saying, “The dollar should be gradually removed from global transactions.”

For his part, the Russian president addressed the situation in Ukraine, saying, “No one is in favor of war,” adding, “The loss of ordinary people’s lives is a great tragedy.”

“However, the West’s behavior has left us with no other option than to react,” Putin said.

Putin considered his country’s rifts with Ukraine to be rooted especially in the provocative measures that have been taken by the West, including the United States, over the past recent years, including the coup in Ukraine, which brought a Western-backed government to power there.

He also cited NATO’s expansion toward Russia’s borders in spite of its earlier promises to avoid such a move to be another source of difference between Moscow and Kiev.

“Some European countries said they were opposed to Ukraine’s membership in NATO, but [eventually] acceded to it under America’s pressure,” Putin said, adding that this indicated the countries’ “lack of sovereignty and independence.”

The Russian statesman considered the US’s assassination of Lieutenant General Qassem Soleimani in early 2020 as another instance of Washington’s “iniquity.”

Elsewhere in his remarks, Putin said the West’s sanctions against Russia were to its own detriment, causing such problems as rising oil prices and food crises.

He pointed to the United States’ use of dollar towards deployment of sanctions against and plundering of other countries.

The approach would eventually backfire against Washington itself since it undermines the global trust in the currency, and prompt countries to use alternative currencies. “Russia and Iran [for instance] are devising new methods of using their respective national currencies in their relations,” he added.

Putin considered his country and Iran’s position concerning Syria, including their opposition to a military attack against the northern parts, to be completely concordant. “The Eastern Euphrates region should come under the control of Syrian military forces,” he added.

Before visiting Imam Khamenei, Putin and Raisi exchanged views about the latest developments in the region. 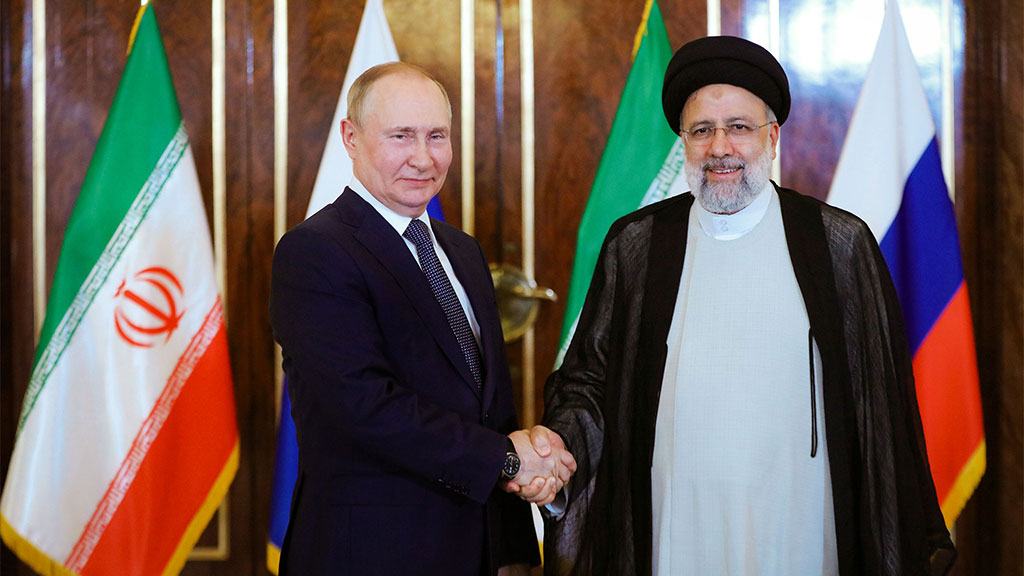 They reviewed the latest state of Tehran-Moscow relations, which has developed significantly in recent years, and commended the leap in bilateral ties, especially in the fields of economy, security, infrastructure, energy, trade and industry.

The Iranian and Russian presidents pointed to successes achieved by the two countries in countering terrorism and emphasized the necessity of developing cooperation in new regional and extra-regional fields.

They also announced their serious will to help strengthen the security of independent countries in the region.

Raisi said Tehran and Moscow are remarkably determined to expand relations, and that cooperation between the two sides should continue to grow.

The Iranian president said successful cooperation between the two countries in the fight against terrorism in Syria has prepared the ground for promoting security and stability in the region.

Putin, for his part, said Tehran and Moscow have increased cooperation in various fields, particularly in the field of international security, underlining that Iran and Russia play a major role in solving the crisis in Syria.