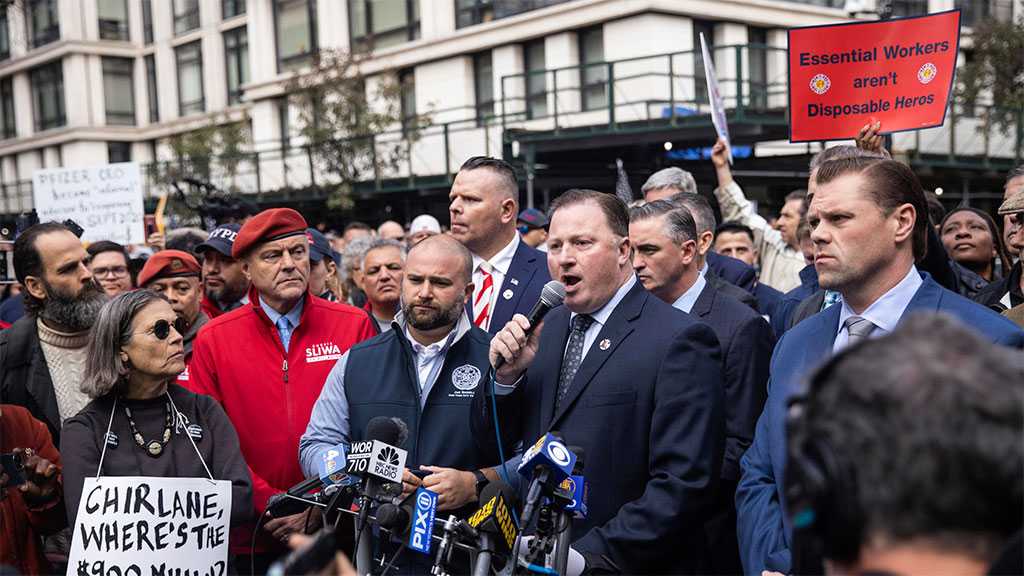 Firefighters and police officers protested against the mayor’s vaccination mandate in New York City as first-response services are scrambling to deal with looming staff shortages there.

Hundreds of firefighters, police officers and other first responders rallied outside Gracie Mansion, Mayor Bill de Blasio’s official residence, on Thursday. They held signs that said “My body my choice” and “Coercion is not consent.”

Most municipal workers have until 5pm Friday to submit proof of receiving at least one dose of the vaccine. Those refusing to do so will be placed on unpaid leave for at least 30 days.

Andrew Ansbro, the president of the FDNY Firefighter Association, whose members participated in the protest, warned that 45% of the city’s firefighters are unvaccinated, and up to 40% of New York firehouses will be forced to close down due to staff shortages after the deadline to receive the vaccine expires.

“The response times are going to go through the roof. We’re just not going to be able to get to the emergencies in time,” Ansbro told Fox News Radio on Wednesday, adding that “fires are going to burn longer.”

The union chief said firefighters are opting for early retirement rather than taking the shot.

US media reported that New York’s fire and police departments are bracing for staff shortages by demanding vaccinated personnel work overtime and cancelling vacations, among other measures.

The Fire Department is preparing for a 20% reduction in service on Monday, CNN said, citing a source.

De Blasio defended the mandate as a way to keep New York’s workforce safe from Covid-19. “If we don’t stop Covid, New Yorkers will die. We must, must stop Covid and the way to do that is vaccination. And that must include our public employees,” the mayor said.

According to de Blasio, 86% of municipal workers have been vaccinated.