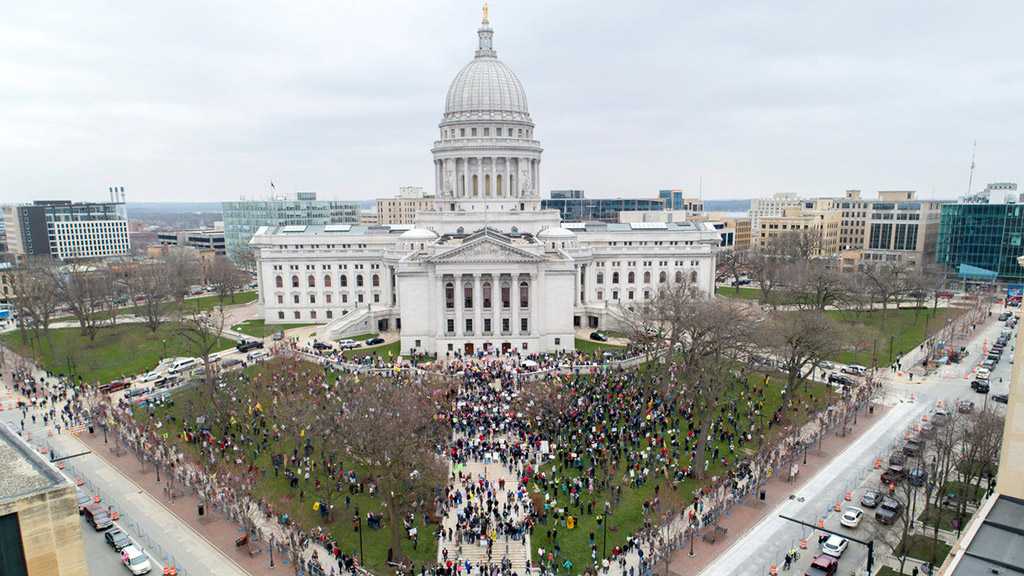 A massive group of demonstrators gathered in Wisconsin’s state Capitol to protest Governor Tony Evers’ stay-at-home order – imposed to stem the spread of Covid-19 – in what appears to be the largest anti-lockdown action to date.

At least 1,500 people descended on Madison on Friday to call for a repeal of the containment measures, according to the Wisconsin Capitol Police. Spurred on by the economic pain inflicted under the lockdown, the protest comes as hundreds of thousands of residents are out of a job, or around one in eight workers.

Carrying a vibrant array of flags, signs and banners, the demonstrators made their presence known outside of the shuttered Capitol building. Though they were denied a permit to hold the protest earlier this week, the event’s planners went ahead regardless, with one organizer stating she was “willing to risk citation” in order to be heard.

Governor Evers extended his “safer at home” order last week, with the containment measures now set to expire on May 26, but the second phase of lockdown will ease some of the restrictions, allowing public libraries, golf courses and a number of other “non-essential” businesses to reopen. Republican lawmakers attempted to block the extension earlier this week, filing a lawsuit calling for an injunction against the policy, but the courts have yet to grant the request.

Despite the relaxed rules, Wisconsin workers will continue to take a beating under the lockdown, seeing far worse unemployment numbers than at the height of the 2008 financial meltdown.

As tens of millions are out of work due to containment measures imposed in states across the US, similar demonstrations have erupted elsewhere in recent weeks, including in Texas, Georgia, Maryland, Ohio, Virginia, Michigan, Minnesota, Pennsylvania and Colorado, though Friday’s event in Wisconsin appears to have drawn the largest crowd of them all. While the crowd got raucous at times, police say no arrests were made and no citations handed out during the protest.

The US has recorded some 890,000 coronavirus infections and just over 51,000 fatalities, with more than 5,300 cases and 260 deaths counted in Wisconsin. Though federal health officials have pointed to a declining number of new cases in the nation’s largest hotspots, such as New York, fatalities have continued to soar, with the US repeatedly topping previous daily death tolls.