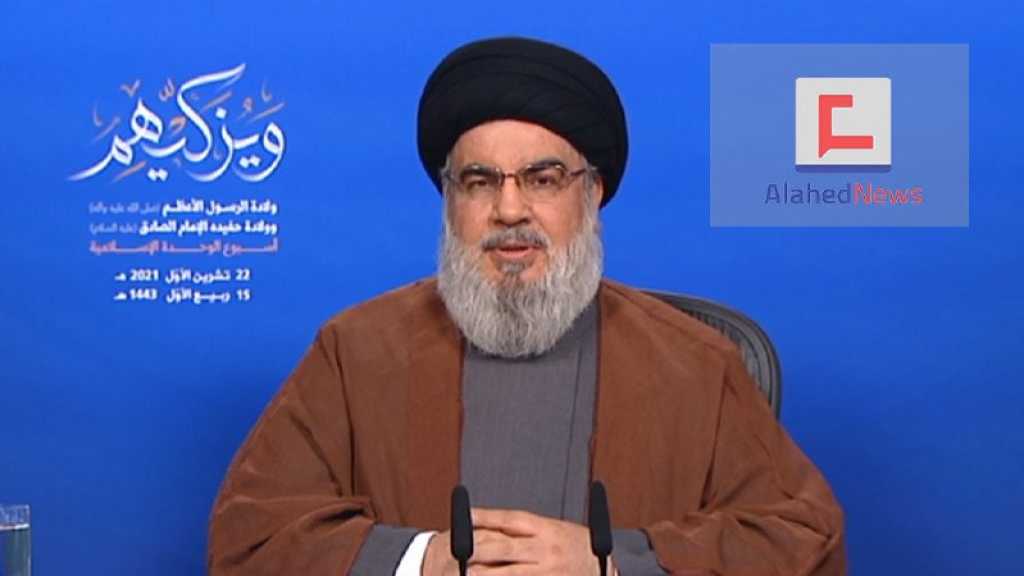 Hezbollah Secretary General His Eminence Sayyed Hassan Nasrallah delivered on Friday night a speech in which he tackled various regional and internal topics.

Addressing thousands of people in Dahyieh [Southern Suburb of Beirut], Sayyed Nasrallah congratulated the Muslim world on the birth anniversary of Prophet Mohammad [PBUH], and his grandson Imam Jaafar al-Sadiq [AS], and the Muslim Unity Week.

The Prophet of Mercy & Unity

On the event of celebration, His Eminence explained that "Among the blessings of Imam Khomeini and the victory of the Islamic Revolution in Iran is the point that appears to be creating disputes, which he turned to a point of unity when he called to labelling the period between the 12th and 17th of Rabiul Awwal as a Muslim Unity Week [between Sunni & Shia Muslims]."

"We must get to know Prophet Mohammad [PBUH] to be our model in life; and we cannot get to know Islam or the Muslim Sharia law without getting to know this prophet, his behavior, words and biography," he added.

In parallel, the Resistance leader underscored that "There is an Ummah [nation] which Prophet Mohammad [PBUH] has brought from the darkness of ignorance, dispersion, illiteracy, and getting lost through building a state for Islam, and conveying the divine religion and the eternal message."

Sayyed Nasrallah further highlighted that "Among Prophet Mohammad [PBUH]’s achievements was that he altered the view towards humanity, in which he annulled all values of ignorance and applied the Islamic system; the Quran confronted looking to women as inferiors and praised them instead."

"No inner peace was present during the Age of Ignorance. People were killed or attacked for any reason," he stated, noting that "The Messenger of Allah achieved an inner peace that can’t be even imposed by police or army. It was a peace from within minds, hearts, and souls made by culture and piety."

Meanwhile, His Eminence clarified that "The humankind is responsible for their countries, people, lands, honors and dignities of people once attacked. This is the religion of Prophet Mohammad [PBUH]."

"Those who are mostly praised by Allah are the ones who know the rights of their brothers and try their best to satisfy such rights," Hezbollah Secretary General confirmed.

Moving to the regional front, Sayyed Nasrallah reiterated that "The top priority and responsibility among Muslims is Palestine with its oppressed people, detainees, refugees and violated sanctities that every human being must be concerned about."

"Among the most important battles any person can engage in against normalization is to boycott ‘Israel’," he emphasized, pointing out that "Funding the Palestinian Resistance is a great responsibility that Arabs, Muslims and humans must shoulder."

On the same level, His Eminence hailed the "Bahraini youth -who protested normalization with 'Israel'- given the fact that they faced the police crackdown and are fully aware of the repercussions of their support of Palestine."

"The position of the Bahraini scholars as well as Yemen and its people in denouncing normalization and supporting Palestine is an expression of commitment to the Islamic duty and responsibility," he stressed, noting that "The US and some Arab regimes want our Arab and Muslim people to eliminate even this hatred through cementing normalization. They want us to love and praise ‘Israel’."

Sayyed Nasrallah also underlined that "The conference of normalization in Erbil was a trial that if not blasted, it would have been followed by similar conspiracies."

In addition, the Resistance leader viewed that "Announcing a cease-fire in Yemen while the siege in place means the continuation of the war," denouncing the fact that "Instead of condemning the victim in Yemen, the international community must listen to the popular will of the millions of Yemenis."

On another level, Sayyed Nasrallah said that "It is strange and surprising that some sides remain silent regarding Daesh's [Arabic Acronym for the terrorist 'ISIS/ISIL group] brutal crimes."

"Islamic unity means cooperation, rapprochement and integration among Muslims and avoiding fighting among them," he reminded, lamenting the fact that "It is unfortunate what Daesh has achieved in the name of the Prophet Muhammad [PBUH], while the Americans say that they've created Daesh, and there are those who do not want to listen."

Clarifying that "Muslims have triumphed in all arenas where they cooperated and united with each other," His Eminence mentioned that "The greatest responsibility on Muslim scholars and elites is to prevent any action that could lead to sedition."

In response, Sayyed Nasrallah urged the "continued political, popular, and media condemnation of all those who were about to push Lebanon towards strife," pointing out that "The resistance in Lebanon emerged victorious by cooperation and collaboration, and the resistance in Palestine wins when it is united on the internal and external fronts  with the axis of resistance."

A Sounding Message to "Israel"

Regarding the bloody massacre in Tayouneh, His Eminence underlined that "Hezbollah is following up with the investigation, which is good and daring."

"The 'Israeli' enemy is mistaken if it thinks that it can act freely in the disputed maritime area before reaching a firm conclusion," Sayyed Nasrallah announced, noting that "At the appropriate time, when the resistance sees that Lebanon's oil is in danger, it will act on this basis."

On another level, His Eminence stated Hezbollah doesn’t have any problem in the issue of "negotiating with the International Monetary Fund and we hope that Lebanon would send one united and real delegation."

"The wealthy have responsibilities towards those who are under the line of poverty, and tradesmen shouldn’t monopolize the goods or raise the prices," Sayyed Nasrallah concluded.