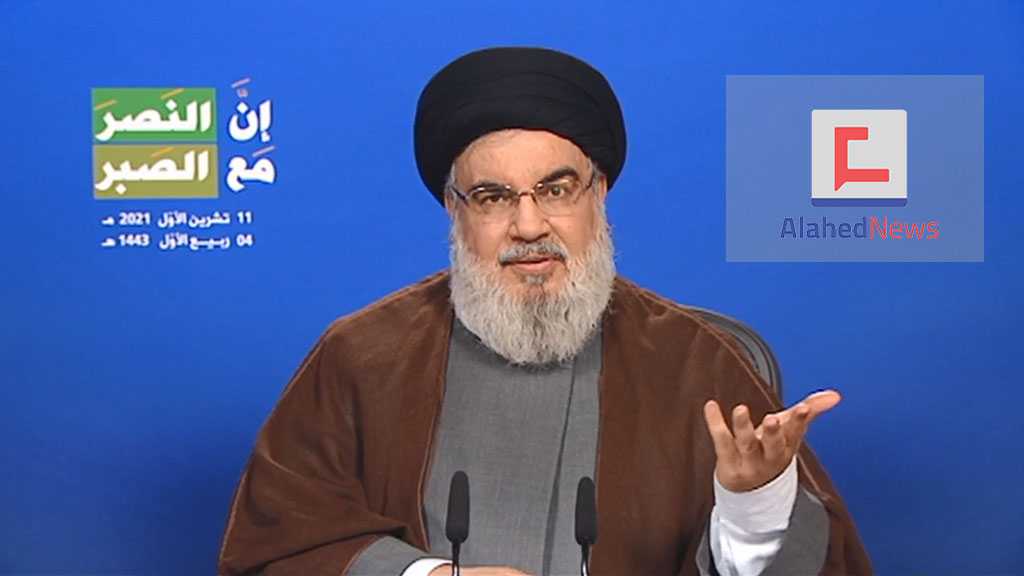 Hezbollah Secretary General His Eminence Sayyed Hassan Nasrallah tackled in a Monday evening speech the latest developments in Lebanon and the region.

At the beginning of his speech, Sayyed Nasrallah emphasized on the need to hold the Lebanese parliamentary elections in their due time, ruling out any possibility that any side in Lebanon wants to delay this occurrence.

Regarding the issue of running for elections and voting from abroad, Sayyed Nasrallah confirmed that there are no equal opportunities to run for elections or vote abroad, especially when it comes to Hezbollah.

“It has long been unfair for Hezbollah and we were not allowed in the countries of migration to campaign for elections or vote freely; but when it is a national interest in which the Lebanese people feel that they are taking their part, then we support the idea of their voting from outside the country.”

As for reducing the age of voting to 18, Sayyed Nasrallah considered this effort as weird in the time being, especially that “Hezbollah has [previously] worked seriously to amend the Constitution and reduce the age of voting to 18,” His Eminence explained, noting that “most of the parliamentary blocs have been rejecting this, except for Hezbollah and Amal Movement, in addition to some MPs.”

Despite slamming those behind driving Lebanon to a total blackout, which he referred to as a phase of ‘clinical death’, Sayyed Nasrallah thanked the Lebanese Army Command for its temporary solution to provide the electric current.

His Eminence however underscored that “the government should have held a session that mustn’t have ended without finding a solution to the problem of electricity,” adding that “Instead of shouldering their responsibilities, the Lebanese officials started trading blames and insults.”

The Resistance leader further dared the Lebanese officials to declare if there is an American veto against solving the problem of electricity, by which knowing such a fact would help Hezbollah build upon it in its work.

“There should be a response to the offer voiced by Iran’s Foreign Minister to solve Lebanon’s electricity problem,” Sayyed Nasrallah highlighted, focusing on the demand that the issue of electricity be on top of the cabinet’s agenda.

His Eminence further warned of a possible aim behind the collapse of the electric sector, which is to justify the choice of privatization.

Sayyed Nasrallah lashed out at the sides that are still objecting to bringing diesel oil to Lebanon, asserting that regarding the issue of diesel oil, Hezbollah is still in the first phase which will last until the end of October, and has added fishermen to the beneficiaries who will have access to diesel oil.

Meanwhile, His Eminence set a timeframe for the second phase of bringing diesel oil in, which he said will start in November under the title of providing heat to the families.

“Providing heat is a big title that requires regulations and a different mechanism of distribution that we will talk about before the start of November.”

Hezbollah Secretary General lashed out at the current judge in Beirut Port blast issue whom he accused of abusing the blood of martyrs for political goals.

“The investigative judge in the Beirut Port blast is continuing to make his predecessor’s mistakes, and even went to worse [deeds],” Sayyed Nasrallah said, stressing that “Truth and justice must be served in this issue.”

“It is better for the investigative judge to reveal the identity of those who brought the ship carrying the nitrates to Beirut Port,” His Eminence added, underscoring that the responsibility of the judges is greater than that of the presidents, the ministers, and the MPs as they are the ones who issued the approvals for the ship to enter and remain at the port.

“While the judiciary wants to protect itself, it wants to imprison a respected Prime Minister like Mr. Hassan Diab. Is this a state of law and judiciary?” Sayyed Nasrallah wondered.

“The Beirut Port blast investigations are very wrong and won’t lead to any truth,” His Eminence stressed.

Sayyed Nasrallah mourned the victims of Kunduz Mosque blast in Afghanistan, which has left scores martyred and injured among worshippers performing Friday prayers in one of the city’s Shia mosques. His Eminence condemned the Wahhabi terrorist Daesh [Arabic for ISIS/ISIL] organization, which has already claimed responsibility for the bloody attack.

“The Americans prepared before their withdrawal from Afghanistan for a civil war, and it is Daesh’s mission to push the country to this war,” the Hezbollah leader emphasized, holding the current authorities in Afghanistan responsible for protecting the Afghan people regardless of their religious and sectarian affiliations.

Although so much time has passed since the incident, Sayyed Nasrallah admitted that it is an ethical duty to mention the brave and intellectual Palestinian martyr Nizar Banat who was assassinated by the Palestinian Authority.

Sayyed Nasrallah appreciated martyr’s Banat’s outspokenness in conveying the ideas of resistance despite his presence in the occupied West Bank.

Stating that he didn’t mention anything before getting to learn all the facts about the person and his assassination, Sayyed Nasrallah condoled with his family, friends and lovers, shared their sorrow, and asked the Palestinian Authority for serving justice in this issue.

A Final Word to the Dear Yemenis 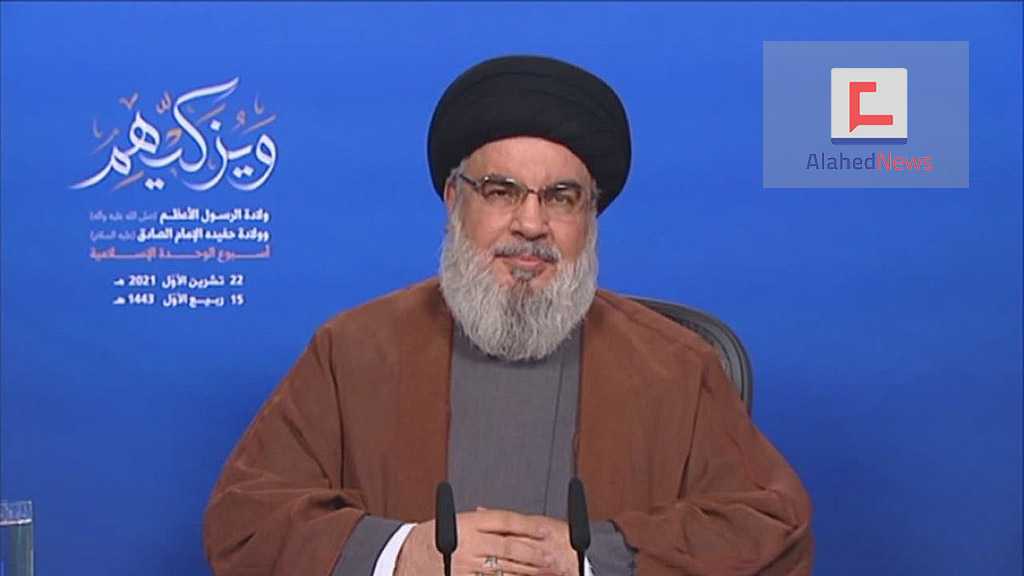