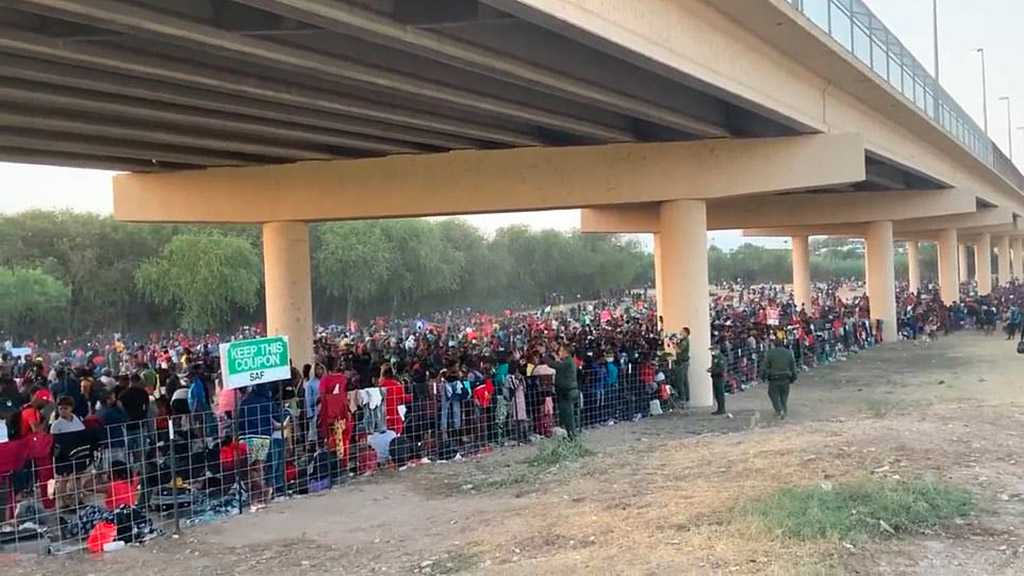 The US Federal Aviation Administration has barred drones from flying over a south Texas bridge where more than 10,000 migrants have gathered, preventing local media from capturing aerial footage showing conditions at the site.

An FAA notice issued on Thursday evening announced a two-week no-fly zone for unmanned aircraft systems [UAS] over the Del Rio Bridge in south Texas, citing “special security reasons.” A massive group of migrants has accumulated under the bridge in recent days, with Del Rio’s Mayor Bruno Lozano putting the figure at more than 10,500 as of Thursday night, also calling on President Joe Biden to address the “ongoing crisis” in the Texas border town.

The FAA drone ban was first reported by a local Fox News affiliate, which previously captured dramatic aerial footage showing the vast numbers of migrants packed under the bridge. At the time the footage circulated on Thursday morning, it was estimated some 8,200 people were at the scene, though the mayor suggested the crowd had grown by another 2,000 or so in the hours since. Many of the migrants are reportedly Haitians, apparently fleeing recent natural disasters and political upheaval in their home country.

While the FAA’s initial notice cited only vague “security” concerns, a statement obtained by Fox said the no-fly zone was imposed at the request of the US Border Patrol, which claimed that drones were “interfering with law enforcement flights on the border.” The agency added, however, that media outlets may be able to request exemptions to continue operating drones over the area.

Senator Ted Cruz, a Texas Republican, also shared footage from the site after making a visit there, taking the opportunity to blast Biden and his administration’s handling of what he called a “manmade crisis” at the border.

“Underneath the bridge behind me are 10,503 people. This is a crisis that is unfolding,” Cruz said in one clip, adding that the number of migrants had grown more than tenfold in the period of one week due to a recent decision by the White House to freeze deportations back to Haiti.

Texas Governor Greg Abbott has also taken aim at Biden over the border issue, saying the administration’s response has been “appalling” and one of “sheer negligence.” Earlier on Thursday, the governor directed local authorities to shut down six points of entry along the southern border “to stop these [migrant] caravans from overrunning our state.”

Del Rio is just one of three dozen such crossing points along the Texas-Mexico border. Migrants arriving at these crossings can either claim asylum or present themselves to Border Patrol to be arrested and then released into the US, with an Obama-era ‘catch and release’ policy reinstated by President Biden earlier this year. Biden has also attempted to scrap ex-president Donald Trump’s ‘Remain in Mexico’ policy, which forced certain asylum-seekers to await immigration proceedings outside the US, though the Supreme Court has overturned the move, arguing Biden did not follow the proper steps to end the practice.