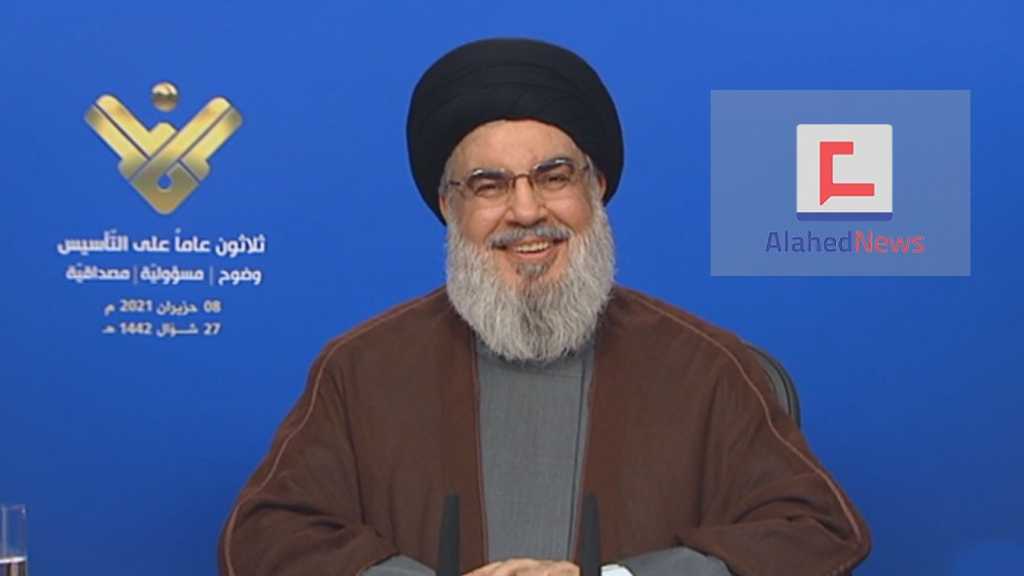 At the beginning of his speech, Sayyed Nasrallah assured all his lovers on his health condition and thanks everybody who was concerned about his health. “I am, thanks to Al-Mighty God, among you, and I have great hope that I will pray in the Holy Al-Aqsa Mosque.”

“I still dream of, and I have hope that we will perform prayers together in the holy Al-Aqsa Mosque,” he said.

According to His Eminence, Al-Manar was established to be the channel of resistance and later resistance and liberation. “Al-Manar TV is not a channel that seeks profit, excitement, and competition. Rather, this channel has a cause and a message that offers sacrifices and pays the price.”

In parallel, Sayyed Nasrallah thanked everyone who contributed to the establishment of Al-Manar TV, atop of which is Sayyed Isa Tabatabei.

He further thanked everyone who contributed to the success and development of the channel since day one until present. “Al-Manar Channel is that of martyrs, the wounded, the prisoners, the scarifying and the victorious people,” His Eminence stated.

“During the July war, Al-Manar was ready and present, and sacrifices were made, and its image and voice did not disappear,” Sayyed Nasrallah emphasized.

Meanwhile, the Resistance Leader underscored that “What is happening in Palestine and Al-Aqsa, the sacred and blessed land, must be followed by all Arab and Muslim nation.”

“What is happening in Palestine, Al-Quds and Al-Aqsa Mosque is that we are facing a spiteful and foolish enemy, and it might move forward because of its internal crises,” he warned.

In addition, His Eminence underlined that [“Israeli” Prime Minister Benjamin] Netanyahu today is defeated and suffering a crisis, and he may resort to different and reckless options to get out of his crises.”

“The Palestinians in Gaza, Al-Quds, the West Bank and the 1948 lands are determined to protect Al-Quds and the holy sites, and the nation must shoulder its responsibilities,” he added, noting that “Al-Quds and the Aqsa Mosque is the cause of the entire nation.”

Sayyed Nasrallah went on to say: “We’re working hard to equate the attack on Al-Quds to the regional war.”

According to Hezbollah Secretary General, “The war on Yemen has proven that the people who are being fought in Yemen are getting stronger. Since day one of the Saudi aggression against Yemen, we believed the Yemeni people can remain steadfast and emerge victorious.”

“Today, we’re witnessing the failure of the Saudi-American war on Yemen,” His Eminence announced, noting that “What we are suffering in Lebanon today is a part of what the Yemeni people have been suffering since years to force them to compromise.”

He also viewed that “The Americans want the war in Yemen to stop but they want the siege to continue.”

On another level, Sayyed Nasrallah hailed the fact that “Al-Manar assumed its responsibilities in confronting terrorism and during the liberation of the Lebanese outskirts.”

Moreover, His Eminence said: “We are against early parliamentary elections as it represents a waste of time because it will not introduce anything new, and it will only distract people from the economic crises.”

“We are with continuing the government formation efforts and there should not be despair. Let those forming the government feel the people’s pain,” Sayyed Nasrallah confirmed, highlighting that “The Lebanese parliamentary elections must be held on time no matter what the circumstances are.”

According to His Eminence, “Early election is not a solution but a waste of time; we are with continuing efforts to form the government and we support Speaker Berri in his initiative.”

“The accumulation of crises has brought Lebanon to what we are suffering today, he said, noting that “Accusing Hezbollah of being the cause of the crisis and ignoring the real reasons is an American and “Israeli” statement.”

On the internal Lebanese crisis, Sayyed Nasrallah underscored that “Our information is that there exists medicine as well as foodstuffs in the warehouses that are monopolized by drug and food dealers.”

“Today's monopolists in Lebanon are traitors, murderers and immoral people,” he added, pointing out that “The current official performance is weak in the various files and at the various ministries and the government, ministers and directors general must shoulder their responsibilities, especially that the government formation crisis might protract.”

On this level, Sayyed Nasrallah declared that “The scenes of the queues at the Lebanese gas stations are humiliating. If Lebanon accepts at this very moment, fuel ships would come now from Iran.”

According to His Eminence, “Solving the fuel crisis in Lebanon is possible but needs a courageous political decision,” lamenting the fact that “We are in a country that has surrendered to the United States.”

“We- in Hezbollah-will go to Iran and negotiate over bringing fuel ships to Beirut port and let the state prevent the people from getting this fuel,” he said, pointing out that “Hezbollah offers 20,000 volunteers to support the state in confronting monopoly.”

Sayyed Nasrallah asked “If behind delaying the formation of the government is waiting to stop subsidizing basic needs?”

“We need a bold political decision to resolve the gasoline crisis in Lebanon,” he said, noting that “Awaiting the end of subsidization could be one of the reasons behind the delay in the formation of the new government.”

According to the Resistance Leader, “Forming the new government is the natural way to fight the symptoms of the crises and set the country on the track of solutions.”