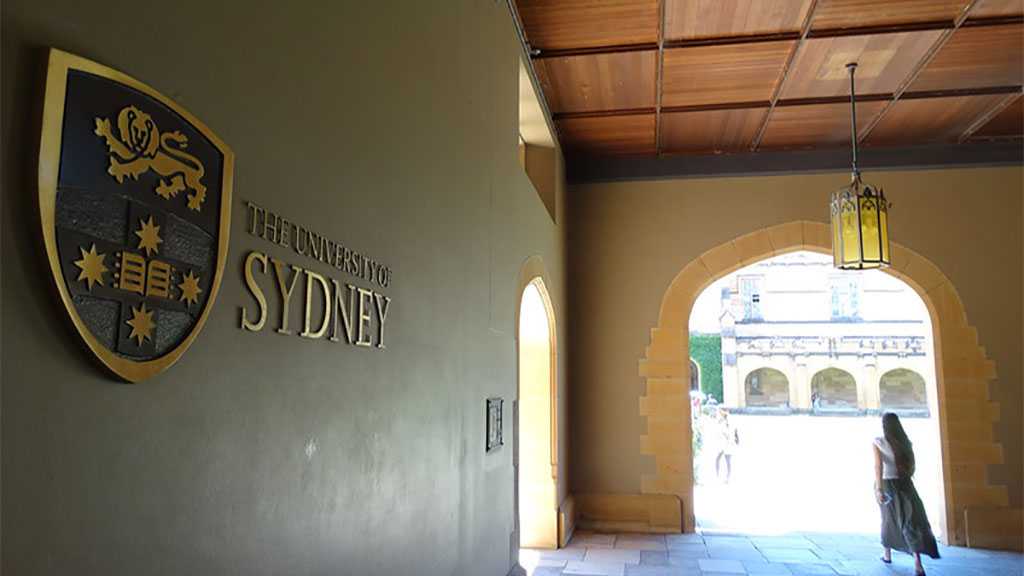 Documents released under freedom of information law show that an ‘Israeli’ organization has, over many years, privately contributed millions of dollars to the University of Sydney’s Faculty of Arts and Social Sciences [FASS]. A sub-branch of the ‘Israeli’ World Zionist Organization [the Fund for Jewish Higher Education] contributes around half a million dollars to FASS each year, with contributions peaking at $819,000 in 2019. The WZO is committed to the ‘Israeli’ colony in Palestine, where more than half the population is denied full citizenship rights.

These amounts are way out of proportion to the nominal beneficiaries at the University: Hebrew, Biblical, Jewish and Holocaust Studies, and give the ‘Israeli’ lobby influence with University of Sydney management. This ‘Israeli’ funding is sustained while federal ‘foreign influence’ laws are trumpeted against China, and form part of a much larger private fund pool - one billion dollar plus, announced with pride in the University’s 2019 Annual Report  - at the University, for which there is little public accountability. The door is wide open for corruption, alongside secret foreign influence.

2020 data on the WZO confirms documents provided to me by a whistle-blower within the administration, back in 2018, which showed that the ‘Committee for Jewish Higher Education’ had been the largest single donor [by far] to FASS, with combined donations of $571,000 [in eight separate donations] in the first five months of 2012, all tagged for the Department of Hebrew, Biblical and Jewish Studies, including its specialty in Holocaust Studies.  With about 10 academics staff [not all full time] that department represents less than 2% of the 700 or so academic staff in the Faculty.

With all senior managers eligible for performance bonuses, at least in part based on their fund raising, these large undisclosed sums indicate a great potential for corruption, all the more so now that the Federal Court of Australia [in the case brought by the NTEU and myself] has rubber stamped management gag orders, even when they concern public academic work.

The ‘Israel’ lobby, acting through the tabloid media, pressured University of Sydney managers to expel me from my academic position in 2018-2019. The final issue was my graphic linking of one of ‘Israel’s’ Gaza massacres with the racial massacres of Nazi Germany; and my refusal to submit to secret gag orders, effectively made under pressure from the ‘Israel’ lobby. In late 2020 the Federal Court ruled that academics must follow management orders, even when it concerns their research and teaching. I have published some detail on this case and its implications; showing the vulnerability of the corporate university to outside pressures.

‘Israel’ lobby influence on the wider phenomenon of academic ‘cancel culture’ deserves attention. A recent Guardian article cites several British academics on the problem of university managers trying to “silence academics on social media.” This was said to be part of a tension between the corporate university and social media, where “on the one hand unis are pushing their staff to be more active online … but when that individual voice is in conflict with the official brand it creates a tension … it is about brand protection.” The corporate media has discovered that it can use this tension to goad management to move against certain academics.

The ‘Israel’ lobby has spent time and effort in this territory, in particular by trying to vilify as ‘racist’ public figures who criticize ‘Israel.’ The International Holocaust Remembrance Alliance [IHRA] has had some success in its attempts to extend the definition of anti-Semitism “to criticism of ‘Israel’ and support for Palestinian rights.” But I am one of many who have written that there is no legitimate basis for conflating criticism of a state or government with inciting hatred against a people.

An ‘Israel’ lobby group in the USA, under the guise of ‘protecting Jewish students’ branded as ‘biased’ more than 200 academics who supported the boycott against ‘Israel.’ Academics and teachers have been hounded from their positions in the USA, the UK, Australia and New Zealand because of their comments on ‘Israel,’ including those who have raised legitimate academic questions about ethno-nationalist settler colonialism” and of “victims becoming perpetrators.”

Jewish writers have not been immune from these attacks. Some have hit back, saying that “unfounded allegations of anti-Semitism [are used to] cover up ‘Israeli’ apartheid.” Last year sixty Jewish and ‘Israeli’ academics condemned the German parliament for its attempts to equate the Boycott, Divestment and Sanctions movement with anti-Semitism.

A 2017 letter signed by more than 200 British academics complained of the ‘Israel’ lobby’s repeated attempts to link academic criticism of ‘Israel,’ and support for the Palestinian people, with anti-Semitism. These moves were “outrageous interferences with free expression” and “direct attacks on academic freedom.” The group said “we wish to express our dismay at this attempt to silence campus discussion about ‘Israel,’ including its violation of the rights of Palestinians for more than 50 years. It is with disbelief that we witness explicit political interference in university affairs in the interests of ‘Israel’ under the thin disguise of concern about anti-Semitism.”

In the USA, President Donald Trump in 2019 signed an executive order to withhold funds from universities which did not do enough to stop “anti-Semitic practices,” which includes criticism of ‘Israel.’ Defense of the ‘Israeli’ colony in Palestine is taken seriously.

‘Israel’ and academic freedom became an issue at the University of Sydney in March 2015, after students shut down a talk by former British Army Colonel Richard Kemp, who had been invited on campus to defend the ‘Israeli’ military’s slaughter of more 2,000 Palestinian civilians in Gaza in 2014. According to the Times of ‘Israel,’ Kemp was to give a lecture about “ethical dilemmas of military tactics and dealing with non-state armed groups.” The ‘Israel’ lobby claimed the protest and student behavior was an attempt to intimidate Jews. A wider debate over the intellectual freedom afforded to visitors like Richard Kemp ensued.

At around this time I looked into the reporting of the slaughter in Gaza, preparing a graphic which showed - from relatively independent sources - that ‘Israeli’ forces had slaughtered more than 1,000 Palestinians [the final count was more than 2,000] of whom, according to UN sources, more than 75% were civilians.

The person who invited Colonel Kemp was former University of Sydney academic Dr. Suzanne Rutland. At her retirement a few months later Provost Stephen Garton praised Suzanne as a person of “moral courage” who had made “an effort to bridge the cultural and political divide, to promote tolerance and understanding … [and] we owe her a debt of gratitude.” Stephen used the occasion to backhand the students who had confronted Kemp, saying that some on campus “confuse academic freedom with the right to disrupt.”

Dr. Rutland had a high profile from her academic and community work. In 2008 she received the Order of Australia for her services to Higher Jewish Education and “interfaith dialogue.” She was also active in campaigns against anti-Semitism and Holocaust Denial. However her response to the students who confronted Colonel Kemp was not so tolerant. She denounced them as vicious racists, saying “when they stand there chanting, ‘free Palestine’ what they mean is the dismantling of the Zionist entity which means genocide against ‘Israel’s’ Jewish population.” This is an extreme view.

In fact, the better view is that ‘Israel,’ by its repeated massacres and ethnic cleansing, is engaged in a form of genocide. The US Centre for Constitutional Rights, noting a controversy over this question, wrote that:

“Prominent scholars of the international law [on the] crime of genocide and human rights authorities take the position that ‘Israel’s’ policies towards the Palestinian people could constitute a form of genocide. Those policies range from the 1948 mass killing and displacement of Palestinians to a half century of military occupation and, correspondingly, the discriminatory legal regime governing Palestinians, repeated military assaults on Gaza, and official ‘Israeli’ statements expressly favoring the elimination of Palestinians.”

Attacks on the critics of ‘Israel’ are often aimed at deflecting attention from this.

The now Emeritus Professor Suzanne Rutland was not just an academic, she was a conduit of ‘Israeli’ finance to the university.  Her online CV [now redacted online] listed her as ‘Chair of the National Advisory Committee on Jewish Education for Australia, for the World Zionist Organization.’ The WZO was founded in 1897 with the aim of creating a Jewish ‘state’ and, since the creation of ‘Israel,’ it has become an umbrella group for a range of ‘Israel’ lobbies. The WZO declares its commitment to “‘Israel’ education.”

At the political level the ‘Israel’ lobby remains influential. A 2018 study by the Australian Strategic Policy Institute [APRI] found that an ‘Israeli’ lobby group in Australia [AIJAC] was the biggest single foreign funder of Australian MPs’ overseas travel. MPs from both major parties were beneficiaries of these ‘study tours’. While the public focus of foreign influence in Australia has become China, with special new laws to criminalize ‘foreign influence,’ the APRI study showed that influence peddling from ‘Israel’ has been greater than that from China or the USA. While Australian MPs had been funded for nearly 60 trips to China and 45 to the US, AIJAC had sponsored around 100 visits to ‘Israel,’ “nearly evenly split between Labor and Liberal.”