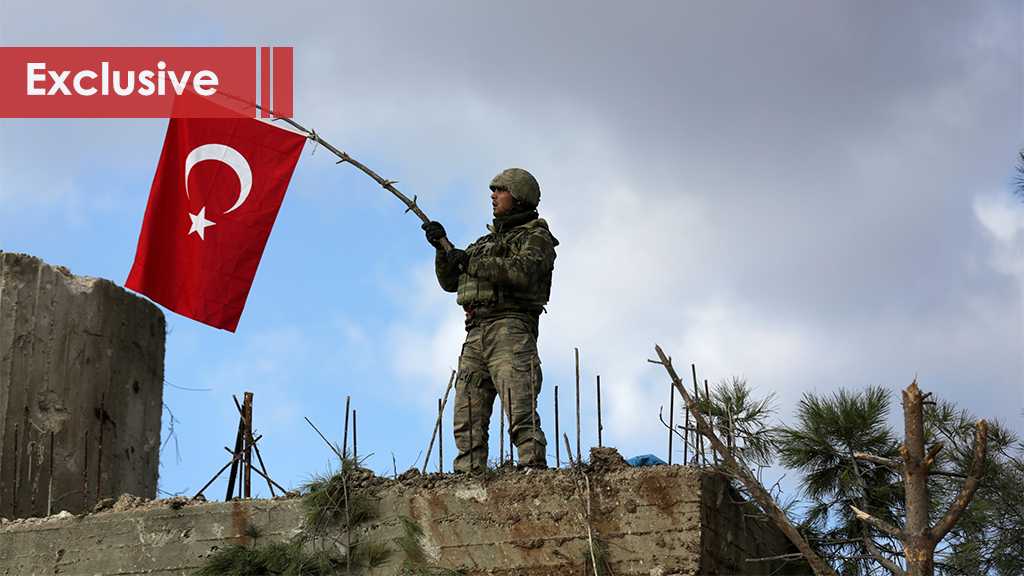 The scenario in Syria’s Idlib witnessed recent consecutive escalations that seem to take Turkey down a dangerous road. Questions still emerge on what has changed in the former friendship and kinship between Turkish President Recep Teyyip Erdogan and his Syrian counterpart Bashar al-Assad and if damage has been caused beyond repair. Why has Erdogan decided to engage in Syria and what about the timing? What is the status of the resistance axis today and where does the ‘Israeli’ regime stand from all this?  Iranian political analyst and strategic commentator Dr. Masoud Asadollahi discusses these matters and other issues in an exclusive interview with al-Ahed news website.

According to Dr. Asadollahi, before 2011, Turkish Foreign policy motto was “zero problem with neighbors,” which meant that Turkey aimed at eliminating any problems between it and its neighbors in the region and in fact enjoyed good relations with all of them to enhance its commercial and economic relations.

“The reason behind such a key decision was particularly because Syria played as a bridge connecting Turkey and the Arab world. Also, Turkey would export its goods through the M5 highway connecting Turkey to Syria and all the way to Jordan (it is also known also as the Damascus-Aleppo highway or the International Road). Also, during the time, Turkey did not have an expansionist policy and its main concern was to be economically and commercially active,” noted the analyst.

He added “Based on that perspective, Syrian-Turkish relations expanded back then and relations between the Assad and Erdogan families were tight. However, after 2011 and with the changes that took place in the region and the toppling of several rulers of Arab countries as revolutions swept across the region, Turkey decided to put its “zero problem with neighbors” policy aside. With the tides of changes in the region, Erodogan estimated that such circumstances make the perfect chance for Turkey to expand its role in the region and even revive its Ottoman empire in a new context.”

Dr. Asadollahi pointed out to the sensitive and negative role of Turkey in backing terrorist and takfiri groups in Syria, and Turkey’s aim of expansionism not only in Syria but in other countries like Iraq and Libya.

According to the analyst, during the past few years, terrorist groups were defeated badly across Syria and they were forced to withdraw from multiple areas which they had controlled. The worst terrorist groups and the most vicious of them who were not willing to either surrender or have seize-fire were the ones transferred to Idlib province. Hence, Idlib had the worst and most vicious terrorist group.

Idlib province is under the control of al-Nusra front or what became known as Tahrirul-Sham group. In 2012, the United States formally designated the al-Nusra Front, the militant Syrian group, as a foreign terrorist organization. It is also became acknowledged as a terrorist group in the view of the EU, Saudi Arabia, the Persian Gulf countries and the UN.

Dr. Asadollahi noted that Idlib is a sensitive province, geographically speaking. It shares borders with Turkey, from which terrorist groups receive tremendous amounts of aid, and is also practically speaking near Latakia province, which gives it access to the coast and can cause more instability across Syria through facilitating the use of missiles and drones. He underscored that the coast is a very vital and important spot for the Syrian government, and controlling it can put the entire Syrian republic into jeopardy. Also, Idlib has easy access to Damascus; suicide bombers can be easily sent to carryout ops and attacks in the different Syrian areas. Hence, Syria has to make sure that this dangerous terrorist group withdraws from Idlib.

In September 2018, Turkey and Russia signed an agreement in the Black Sea resort of Sochi, under which Ankara was required to establish observation posts in the militant-controlled Idlib and end the presence of extremist terrorist groups and engage in peace talks with the Syrian government.

Of course, according to the analyst, Erdogan did not keep his promise but rather claimed to have made failing attempts in that path. “Turkey did not want to have the terrorist groups removed from Idlib and in fact, Erdogan wants to keep an upper hand in the province and stay in control of the terrorist groups because it constitutes a pressure card on the Syrian army and its resistance allies. Turkey received multiple defeats along with the terrorist groups. The resistance axis forces united together were able to free vast areas from takfiri hands and this frustrated Erdogan, which eventually led him to illegally send troops to Idlib.”

Dr. Asadollahi added that “With the latest fights that erupted in Idlib Turkey received a strong slap. 36 Turkish soldiers were killed in airstrikes in the embattled province as Syrian government forces, backed by allied fighters from popular defense groups, continue to score territorial gains in battles against foreign-sponsored Takfiri militants in their last major bastion in the country.”

The political analyst assured that Erdogan put himself in the corner. He sought help from the US and the NATO who were both not willing to put boots on the ground. He also contacted Russia’s Vladimir Putin multiple times to meet but his request was rejected until Putin agreed to meet him at the Kremlin only lately.

Turkey’s Erdogan recently sent more troops into Syria, which according to Dr. Asadollahi indicates that Erdogan does not keep his promises or words. “This is a clear indication that Erdogan does not stick to his word and does not intend to abide by any deal or memo of understanding. Unfortunately, this is not something new. It has been the habit of Turkey to break promises and breach understandings. I think that Russia this time should not remain silent in face of Turkey’s attitude and must take action. The huge numbers of troops entering Syria is an indicator that the crisis will only grow bigger and we will not see a solution to the matter anytime soon. We have to wait and see what will happen.

On the Russian role in Syria, the analyst says that “Russia does not show one attitude towards the crisis. It is true that Russia and Syria are allies, but we have to also keep in mind that Russia and Turkey are good allies too. The two countries share good commercial and trade ties, Russia has its gas and oil pipes pass through Turkey, and the trade between them is estimated to be something around 30 billion dollars per year. Russians try to keep Turkey on their side, and simultaneously take advantage of any disagreement between Turkey and the US, such as the Kurdish issue.”

Nevertheless, Dr. Asadollahi assured that Russia’s attitude is not fruitful and that at the end of the day Russia has to make a clear move and tilt towards one side rather than keep itself hanging somewhere in the middle. “Russia keeps showing contradictory policies when it comes to dealing with the Syrian crisis. At the same time, there is a sort of contention between Russia and Turkey not only in Syria but also in other places in the region such as Libya. The two countries aim at extending their influence in the region. It’s like a game, Russia makes concessions to Turkey in Syria to gain some cards in Libya and so forth.”

As for the ‘Israeli’ regime, the analyst notes that its aggression does not stop not even for one second. “In terms of Syria, we all know that the ‘Israeli’ regime has been backing terrorist groups especially in Southern Syria in Quneitra. Its attacks and air raids targeting the Syrian army and its allies are nonstop. The apartheid regime was hoping that a war would start between Iran and Turkey inside the Syrian territory. However, the commanders and military consultants of the resistance axis and in cooperation with the Syrian army have enough wisdom not to be dragged into any provocations.”

Many media outlets keep attacking the resistance front groups fighting alongside the Syrian army in Syria. Reiterating the status of these groups and the reason behind their existence, Asadollahi noted “The reason behind the presence of the resistance axis groups in Syria is, and by request of the Syrian government, to fight terrorist groups that have been ripping Syria and the region apart. Whether in Syria or in Iraq, the resistance front defeated the terrorist and takfiri groups badly and were able to defend and preserve the holy sites and shrines of Muslims and Christians. Not only did the resistance axis triumph in face of terrorist, but it also paved the way for the formation of what is known as the popular defense forces which includes the people themselves who are willing to defend their own land and territory. Hence, the main goals of the resistance front which includes preserving the Syrian government, protecting religious sites, defending Syrian and Iraqi independence and protecting religious minorities.”