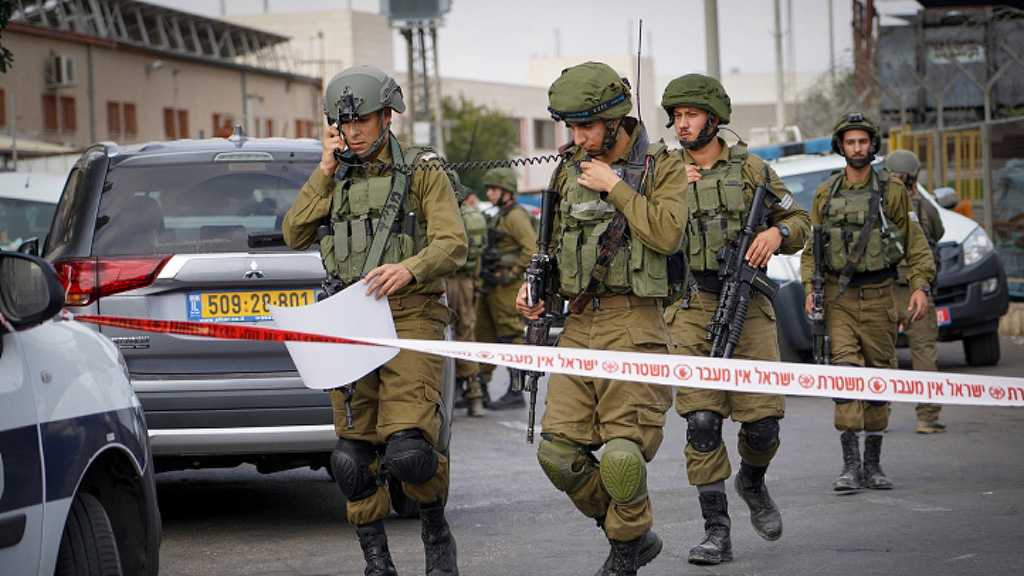 “Israeli” Occupation Forces [IOF] continued to search Sunday night for the Palestinians who executed the heroic operation at the Barkan Industrial Park in the Samaria region of the occupied West Bank on Sunday morning.

This is the first operation in the park – which employs both “Israelis” and Palestinians.

Na’alwa had a permit to work at the Barkan Park. He had been employed as an electrician for the past seven months at a factory run by the Alon Group. However, he had not come to work for the past few weeks, according to Manelis.

Na’alwa came back to work early Sunday morning, at around 7, entering the factory building allegedly with a semi-automatic Carl Gustav rifle hidden in his bag, which he left on the ground floor.

According to “Israeli” KAN news, he fixed an electrical problem on the second floor, where he saw Levengrond-Yehezkel and Hajbi already at work.

He then went downstairs to get handcuffs and his bag, and returned, fatally shooting the two employees. According to Samaria Regional Council head Yossi Dagan, Na’alwa allegedly bound Levengrond-Yehezkel before shooting her.

A third woman, 54, who survived, heard a noise and went to see what was happening. Na’alwa shot at her as well, moderately wounding her, but she was able to hide under a table. He shot at two other women and one man before fleeing.

Footage from security cameras capured Na’alwa running away from the scene with a gun in his hand.

The IOF said it is looking into the security breach that enabled the perpetrators to bring a weapon into the industrial park.

Hadashot TV reported that the gunman allegedly left a suicide note with a friend who worked at the same factory several days ago. The friend, who did not report the letter, was arrested by “Israeli” security forces who are investigating whether the operation could have been prevented.

IOF Chief of Staff Lt.-Gen. Gadi Eisenkot later toured the factory and held a situational assessment with the head of the Central Command, Maj.-Gen. Nadav Padan, after which it was decided to send additional troops from the central command and Samaria Brigade to the area.

The “Israeli” Border Police’s Yamam unit as well as troops from the IOF’s elite Duvdevan, Lotar and Oketz units, and Shin Bet forces are participating in the manhunt for Na’alwa, and stormed his village Sunday afternoon.

Clashes broke out in Shuweika on Sunday night as troops arrived at Na’alwa’s home. Troops from the Menashe regional brigade mapped the building ahead of a possible demolition order. Na’alwa’s brother was reportedly among those arrested and interrogated. The detainees were transferred to the Shin Bet to establish whether they knew of Na’alwa’s plans.

Checkpoints in the Samaria region were closed as part of the manhunt for the shooter.

The IOF stationed additional troops into the occupied West Bank in the aftermath of the operation. The IOF spokesman noted it has confiscated 330 weapons to date in 2018, 100 of which were seized in the last month alone.

The entity’s War minister Avigdor Lieberman wrote on his Twitter account that it was only a matter of time until the IOF catches the assailant.