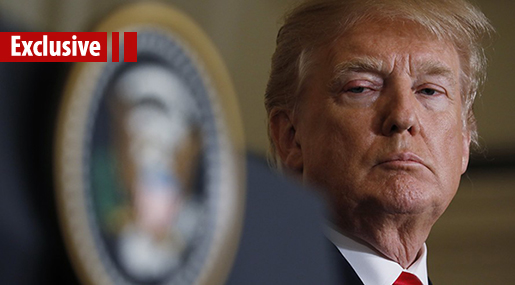 "What we have been saying, for over thirty years, about political, economic, moral, and social corruption within the US ruling establishment, he [Trump] came out and exposed," Sayyed Khamenei told a group of Iranian Air Force commanders on February 7, 2017. "With everything he is doing ... he is showing the reality of American human rights."

In the months that followed, Trump has been busy pulling back the curtain.

Between filling his cabinet with warmongering neocons like John Bolton and pairing up with hawkish generals and shady billionaires, the Trump administration also found time to withdraw from the UN Human Rights Council (HRC).

Citing alleged anti-"Israel" bias, the US will be the first state to leave the UN body voluntarily.

"For too long, the human rights council has been a protector of human rights abusers and a cesspool of political bias," exclaimed the US ambassador to the United Nations, Nikki Haley, earlier this month.

One can be forgiven for thinking that this reads a little too much like a bit of soul-searching on the part of the American government.

But while Washington's exit from the HRC can certainly be described as ironic, the move is hardly surprising.

The ill-timed maneuver came as American border guards ripped apart families, and Washington assisted allies in massacring tens of thousands in Yemen, all the while defending the killing of unarmed Palestinian protesters in Gaza.

According to US-based peace activist Scott Rickard, "the Human Rights Council should have been considering ejecting the United States based upon its human rights violations."

"In the United States we have one of the most atrocious human rights records; we have almost ten thousand people a year being killed by police officers," Rickard added. "At the same time, the United States is heavily involved in warfare around the world, murdering millions in my lifetime alone."

In the lead-up to the US withdrawal from the Council, the outgoing UN human rights chief, Zeid Ra'ad al-Hussein, blasted the Trump White House for its "unconscionable" policy along the US border with Mexico.

Zeid was referring to the Trump administration's recently abolished effort to dissuade illegal migrants from crossing the border by separating children from their parents and dispatching them to detention centers with no assurances that they would ever be reunited.

"The thought that any state would seek to deter parents by inflicting such abuse on children is unconscionable," Zeid said during his opening remarks to the HRC's 38th session this month.

Trump attempted to justify his immigration policy by citing concerns over ‘security and safety'.

Recently, he was quoted as saying that those who sneak across the border "could be murderers and thieves and so much else."

Such comments, much like the mass outrage by Trump's critics at home who are often complicit in the slaughter of Yemeni and Syria children, are intended to disguise the fact that the asylum seekers are fleeing the very violence and chaos that the US instigated.

"The president has to realize what a hundred years of US policy towards Central and South America has caused," said radio talk show host Robert Patillo.

"US efforts to destabilize governments, US efforts to set up puppet dictators - that's why we have this level of crime and this dysfunction in Central America," Patillo explains.

For puppet dictators, look no further than Saudi Arabia.

The kingdom, which remains the source of the Takfiri ideology, fueling global terrorism and the country of origin of 15 of the 19 hijackers on 9/11 has somehow stayed off of Trump's travel ban from seven countries.

This week, the US Supreme Court upheld the ban, arguing that it had a "legitimate grounding in national security concerns" and was thus constitutional.

Trump's ban, which is breathtaking in scope and inflammatory in tone, extends to North Korea, Syria, Iran, Yemen, Libya, Somalia and Venezuela.

Journalist and political commentator Syed Mohsin Abbas believes that "those Muslims who are the lackeys and the puppets of the US foreign policies, who freely give their recourses to the US and who don't oppose the US' imperialist policies in the Middle East are not banned."

Abbas describes the ban as a "direct attack against any nation in the world who dares to stand up to the US" with Iran being one of the primary targets.

The policies of the Trump administration are as much a reflection of a deeply polarized United States, as they are an indication of the responsibility that the powers that be bear for instigating those very same divisions.

A new poll testifies to just how divided the American public has become over issues like immigration, declaring that some 31% of the population believes a second civil war is likely in the next five years.

The Rasmussen national telephone and online survey revealed that uncompromising accusations of fascism and an alleged desire for open borders have raised fears in the US over the possibility of an armed confrontation between Trump's supporters and those opposed to his policies.

And in light of the manner in which the current political climate in the country has drawn the curtain to reveal the hitherto well-concealed, callous visage of American society, any suggestion that this previously unthinkable scenario now appears far more likely holds water indeed.