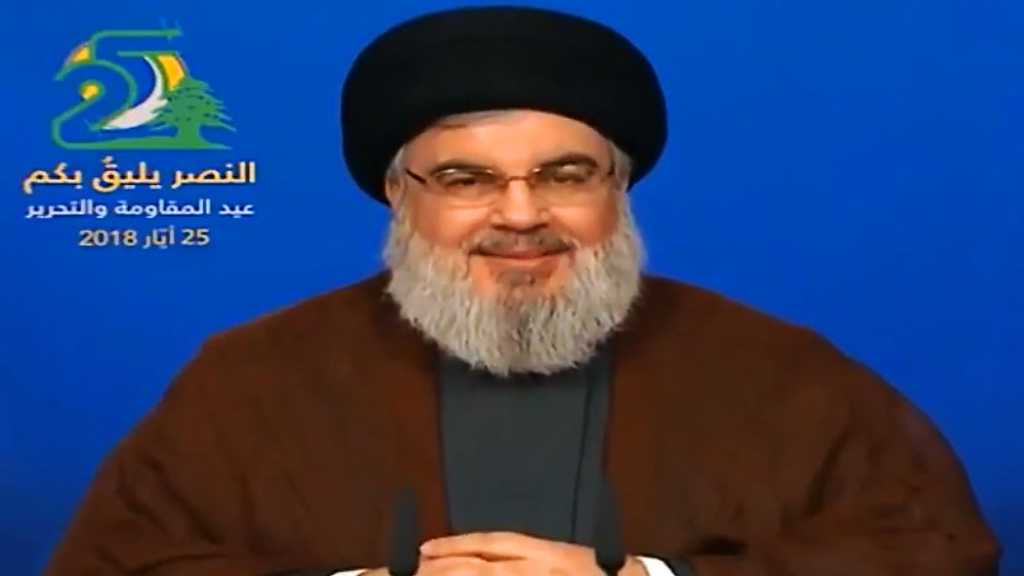 Hezbollah Secretary General His Eminence Sayyed Hassan Nasrallah confirmed that this year's Al-Quds Day should receive great attention at all levels in view of what the Holy city is facing, especially after US President Donald Trump's to recognize it as the capital of the occupying entity.

In a televised speech on the 18th anniversary of 2000 Liberation, Sayyed Nasrallah highlighted that the anniversary is a very important and national one i.e. full of lessons.

"The heroic fighters, martyrs, wounded, liberated prisoners, general public, Lebanese Army, security forces, resistance factions and the Syrian army are the ones who are credited with this achievement," His Eminence added.

He further hailed the Syrian and Iranian support so that the 2000 liberation was accomplished.

"This victory had divine, humane and moral aspects as the resistance remained steadfast in the major confrontations," The Resistance Leader viewed, noting that "victory has shown that the enemy has lost confidence in its army and its agents."

This comes as he praised the sacrifices of the Resistance: "There were martyrs that gave their blood and their pure souls. They left their work and their families and lived in valleys and in fear, and spared no effort to liberate this land."

In parallel, His Eminence underscored that "the residents returned to their homes and fields, the captives returned in pride and dignity and security returned along the border with Palestine."

"We are living in safety, dignity and freedom thanks to this victory," Sayyed Nasrallah mentioned.

Sending an assuring message to the Lebanese and a threatening one to the enemy, His Eminence vowed: "We do not seek war. However, we do not fear it."

In addition, Sayyed Nasrallah confirmed that the Resistance is confident of victory in any upcoming war.

Commenting on the recent US-Gulf decision to blacklist Hezbollah and its leaders as terrorists, Sayyed Nasrallah played down the step. "The US-Gulf blockade on the Lebanese and Palestinian resistance, including blacklisting us, is not new."

"The US and Saudi sanctions against me and my brothers do not have material effect, as we don't have money in banks and we don't trade through regular channels," he elaborated, noting that "these sanctions aim is to scare people of meeting with us."

On this level, His Eminence went on to emphasize that the Lebanese government has responsibility towards citizens put on US terror lists and must not abandon them.

"The Lebanese government had a responsibility to all its citizens placed on US terror lists and that some of those affected were not affiliated and did not give money to Hezbollah. As they're Lebanese citizens, the Government should defend their rights. They should reject the sanctions," he confirmed.

Warning that this is a US-"Israeli" course and that the Gulf states are taking part in it, Sayyed Nasrallah viewed that "sanctions, the terrorism lists, the blockage, and so on are part of the battle."

"When you defeat the invincible "Israeli" army, when you advance a cultural change in the region, and stand in as an obstacle in the way of US and "Israel" schemes in the region and contribute to foiling them, it is natural that the s enemy will threaten you," he explained.

Sayyed Nasrallah also mentioned that "Blacklisting Hezbollah aims at scaring the allies and pushing them away from the resistance as well as drying up the Resistance's funding sources and they've been seeking this since the 1990's."

"Resistance fighters deserved victory in 2000 and 2006 as they had honesty and made enormous sacrifice in their battles against the enemy," he stated, noting that "when the enemies face popular resistance, they will not be able to defeat i. They will lose their battles."

In addition, Hezbollah Secretary General praised the fact that people from diverse Lebanese societies proved their loyalty to the Resistance by voting in favor of Hezbollah during May 6 parliamentary elections.

On another level, Sayyed Nasrallah congratulated the Syrian leadership and people on the liberation of Damascus and its entire countryside.

"I had previously said that the Syrian leadership and their allies would not let Damascus fall, whatever the sacrifice. Today, we also turn to Syria, its army, its people and its allies to welcome the liberation of Damascus in its entirety," he added.

Regarding Morocco's fabrications against Hezbollah, His Eminence stressed that there is no political relationship between Hezbollah and the Polisario, and there is no communication between the two sides

"The pressures on Iran are also part of this course," he said, pointing out that "the Moroccan foreign minister has not offered any evidence to his Iranian counterpart backing his accusations."

"We are calling for a speedy government formation because this is in the country's interest and because there are major files that need to be addressed and the all the developments in the region are in our favor," Sayyed Nasrallah added.

He further unveiled that "Hezbollah will not put forward a candidate to head any of Lebanon's key ministries."

"Hezbollah didn't and will not demand having one of the so-called sovereign ministerial portfolios," His Eminence stressed.

According to him, There are parties with whom we may disagree strategically, but nothing prevents from cooperating with them in fighting corruption.

"We look forward to a cabinet which would represent politicians from all factions and parties. It is important for Hezbollah to have a constructive presence in the new cabinet. Our fight against corruption is a serious and major battle, and it completes what happened in the 2000 liberation," Sayyed Nasrallah said, revealing that "among the brother MPs in the ‘Loyalty to the Resistance bloc', we chose MP Hassan Fadlallah to follow up the file against corruption."