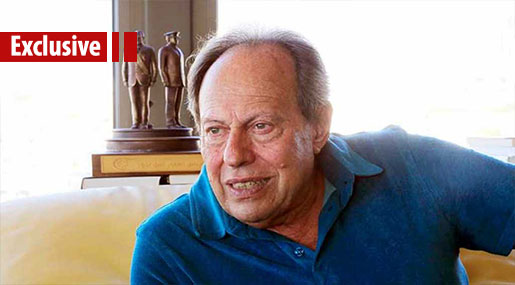 It would not be a "Resistance and Liberation" holiday without hearing from him. He holds the title of the pro-resistance president and the "man" - described as such by the master of victory.

His national and historic positions, which never abandoned the resistance, testify to that. The path of President Emile Lahoud, the nationalist, is full of honorable stances that carried Lebanon from the age of dependency to liberation. He defended the resistance before he knew them. It is enough that he is one of those who sought to liberate the land. The historic victory of 2000 was the pride of his reign and the result of his courageous positions that supported the path of Jihad at a time when the entire world stood against him. He was offered a lot in exchange for abandoning this path. He chose to work with conscience and in accordance with his convictions, which are not bought and sold.

In an interview with al-Ahed, President Lahoud recalls many stages, from his time as commander of the Lebanese army to the time he took over the presidency. His does not conceal his "joy" with the liberation of the land during his reign. He describes this event with pride. He tells how he learned about Hezbollah and its leader for the first time and how very proud he was of meeting him [the leader]. He often expresses his happiness that he is living in the time of the resistance fighters, who have returned Lebanon's stolen dignity.

Below is the script of the interview:

Eighteen years after liberation, what does President Emile Lahoud remember from that era?

It is the most beautiful day of my life. Before that date, there was no hope that we would be able to regain our dignity. Our land has been occupied for 22 years. All the officials who inherited the government were accustomed to this issue until it became obvious. Truthfully, I never heard of Hezbollah. When I took over as army commander, I was living in Rayak. The atmosphere was charged against Hezbollah. When I wanted to visit my family in the north, they used to send me telegrams asking me to be careful and watch out for Hezbollah members who intended to kill me. However, the teaching inside the house, which does not know a path of sectarianism, made me not interested in the matter, even though the picture in my mind drawn about Hezbollah is that it was a Takfiri group. When did I learn of Hezbollah? It was in 1991, when I took over the army command. A decision was issued by the Lebanese state to position the army in the South. I went to Tyre. One of the officers told me: "For 22 years, I was deployed here. I was a company commander and we received instructions that ‘if a militant is caught, we must hand him over to the intelligence services, who in turn will imprison him.' You are a new army commander, what are your instructions for me in such a case?"

I asked him, what is their nationality, are they Palestinians? He said no, they are Lebanese who want to return to their villages, which are occupied by the "Israelis", and they carry out operations against them. Sometimes we catch them before they arrive as they are on their way to the valleys. What do you want us to do in such a situation? I told him: "Lebanese who want to return to their villages that are occupied by the Zionists are resistance fighters. You have to support them." He told me, "appreciated" and he rejoiced. It was the first time an officer thought in this way. " To me, as Emile Lahoud, any nationalist army commander should not ask permission from anyone to issue such an order. Should I stand in the face of those who seek to liberate the land! On the contrary, I should be an absolute support for them.

Then I returned to Beirut and the President of the Republic, Elias Hrawi, told me: "Emile are you crazy? You are supporting people who are causing trouble at the border. Tomorrow an "Israeli" soldier will be killed and ["Israel"] will attack all of Lebanon." Do you want to ‘destroy' Lebanon? I told him: "Have you ever heard of an army commander whose land is being occupied and he gives an order to his officers that whoever liberates the land should be imprisoned? We must support them. He told me: I give you an order to confront them. I told him: I will not obey.

In 1993, the resistance became stronger than before. The Zionists were annoyed and exerted pressure on the Americans, who in turn pressured the Lebanese state and the Security Council. The latter took a decision to get rid of Hezbollah. The Lebanese state at the time issued a decision. I remember an incident that took place at the time. Members of the army spoke to me. They told me that a Zionist tank bombed a Lebanese area and killed a woman. What do you want us to do? It was the first experience with "Israel". I asked them: is there a Lebanese tank in range? They said yes. I said, what are you waiting for? Respond. At this point, the President of the Republic summoned me and told me: "Emile, what is happening? How could you do that and give an order to respond? I told him this is what I must do. He asked me more than once to eliminate Hezbollah with the support of the UNIFIL forces. I told him: You are not understanding me, I will not do it. He told me: ‘Tomorrow is the meeting of the Supreme Council of Defense and you have to attend.' I said, ‘I will not attend.' He replied, ‘then we will take the decision without you. Someone else will be the army commander.' I told him: let him come. I am doing my duty and what my conscience tells me. The next day I came late to the meeting. I found them meeting with the UNIFIL commander. They designed a map for the elimination of Hezbollah. I told them: what are you doing? Fold this map. The commander of the UNIFIL forces replied: ‘they have taken the decision in the Security Council.' I told him: let them take whatever they want. I will not comply. Let them bring another army commander to carry out what they want. What right does the Lebanese state have to order a national army to strike its people because the "Israelis" are annoyed?

All this and you had no interaction with Hezbollah. When was your first direct contact with them?

After all these years, there was no contact between us. But there was absolute support on my part.

The first contact in which I got to know Hezbollah was in 1997 when I got a call saying that Hadi, the son of the Secretary General of the party, Sayyed Hassan Nasrallah, was martyred. I told them, this is the first time that an Arab leader presents his son as a martyr. I want to get to know him. Indeed, the measures were taken. I found him relaxed although the news of his son's martyrdom was announced an hour before my visit. We spoke for about ten minutes as I consoled him. I felt that we would win and triumph with this leader. Days passed, and we did not meet. In 2000, at the time of the liberation, Sayyed Nasrallah asked me to meet him. So we met and he presented me with an "Israeli" rifle. After that, I never saw him until I left the presidency. At the time, we sat for about three hours and talked about everything. He told me, ‘I do not know you.' I told him, ‘We met in good conscience.'

What does to Emile Lahoud that the land was liberated during his reign as you have always described this event with pride?

It means my dignity. I take pride in this event very much. I am glad that the dignity of the Lebanese had been restored during my days. Is it possible that the "Israelis" occupy our land for 22 years and no one is shaken. Only a handful of resistance fighters met and liberated the land and defended us. Without them, "Israel" would have been among us.

How did the liberation of the land contribute to your military experience?

We can achieve the impossible. Many asked me what I was doing. No one can resist "Israel". I told them, you will see. The resistance is the immunity of Lebanon. I am surprised how some people speak after the conclusion of the elections on the need to disarm the resistance, after all that it has done! They certainly get money from their masters who incite them to do so.

How do you perceive the golden equation, which you supported early on?

Without the golden equation, Lebanon would no longer exist, especially after the events that took place in Syria and Iraq, which made Lebanon strong and able to stand up to "Israel". Unfortunately, we did not learn that we must preserve it through national action and not through sectarianism.

Today, the Palestinians are doing all they can to liberate their land. What is your advice for them given the experiences with the liberation of Lebanese lands?
There is no talk with "Israel" except in the language of force. I do not want to criticize, but when I hear some Palestinian officials talking about the need for a settlement, this does not return the land. The solution is only by force, just as we did in Lebanon. Here, I recall an incident. At one of the closed summits of the Arab heads of state in Khartoum, Palestinian Authority President Mahmoud Abbas said ‘how can I possibly pay for the salaries for the ‘Strip' when the Zionists are not allowing the funds to arrive. I ask you Arabs to mediate with the concerned parties to put pressure on "Israel" so that the money can reach us. I told him, ‘Abu Mazen, behave like we did in Lebanon. It is shameful to beg for our salaries. We have to attack them by force. If you acted like Lebanon, you will not be here right now.'

You have always said that the the crisis in Syria will conclude with a victory. How do you describe the situation seven years after the crisis started?

Syria triumphed. The losers including the Zionists and the Arabs are coveting a winning card. That is why they are pressing in the last quarter. But they will not triumph. The crisis will soon be over and with it the conspiring mentality in Lebanon will end.

How lucky we are that we have lived in the time of the resistance and the men who sacrificed themselves for the homeland.