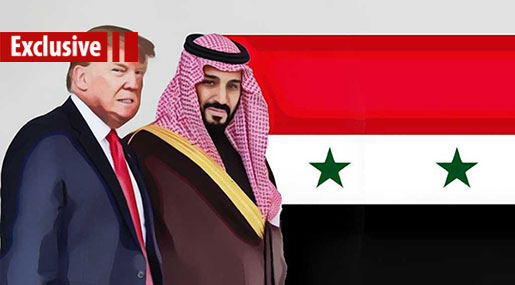 Hours after the end of the tripartite aggression on Syria at dawn last Saturday, regional and Gulf capitals issued statements of support and congratulations. One of these statements came from the Saudi Foreign Ministry's on Tuesday afternoon announcing Riyadh's full support for the "military operations launched by the United States, the United Kingdom and France against Syrian military targets". The Riyadh statement held Damascus responsible for what happened and accused the international community of "failing to take firm measures" against Syria. What Riyadh calls "inaction" reflects its chronic disappointment in Syria, having been disappointed by Obama in September 2013 after the first chemical film. And Trump seems to be repeating history today.

After December 25, 2015, the date of the assassination of the leader of the "Army of Islam" [Jaysh al-Islam] Zahran Alloush, it became clear that Saudi dreams in Syria, especially in the Eastern Ghouta, were gone. Alloush represented an old Saudi investment that dates back to the time of his father Abdullah Alloush who injected the residents of Douma and Eastern Ghouta with Saudi Wahhabism. He spent his life in Saudi universities and schools, and his son Zahran followed in his footsteps.

In June 2015, Saudi Foreign Ministry documents published by WikiLeaks included the minutes of a meeting titled "Preparatory Committee Emerging from a Higher Committee to Study Topics Related to anti-Iranian Threats and Movements". In the minutes of the mentioned committee's meeting (which seems to have been held in the beginning of 2012), the fourth item from the recommendations explains the outlook of the Saudi regime towards the war in Syria, describing it as "the current battle with the Iranian regime on the domestic scene in Syria". It explains its objective when it considers that "it is absolutely impossible in any event to lose it [the battle] due to the consequences and dangers that may directly threaten the national security of the Kingdom and its strategic interests. "

From here, one can understand why the Saudis have always sent proposals to Syrian President Bashar al-Assad that the war would end and that things would return to normal if he decided to sever his relationship with Tehran. They also relied on the US remaining in Syria due to Syria's rejection of temptations. This was stated by the Saudi crown prince in an interview with Time Magazine at the end of last month.

Following the tripartite aggression on Damascus, the idea that the Saudis and the Zionists were still betting on the dismantling of the Russia-Iran-Syria alliance, which had secured many victories, was reinforced. In his recent speech last Sunday, Hezbollah Secretary General Sayyed Hassan Nasrallah pointed to the "disappointment of some regional countries that bet that the tripartite aggression will destroy the Syrian air force and the positions of the Revolutionary Guards and allies." It is no secret that both Tel Aviv and Riyadh basically wanted the Americans to target sites where the Revolutionary Guards and Hezbollah were deployed. Immediately after the aggression, the Zionist lobby in the United States rushed to talk about "building on the first strike to take tougher steps toward Iran in Syria". The aim, of course, is to focus pressure on Tehran, especially after the "Israeli" T-4 aggression, to push it to retreat from Syria.

This approach, which Riyadh has in common with Tel Aviv, was expressed by the Saudi crown prince during his recent visit to the United States. He did not miss an opportunity to give an interview there. He exaggeratedly cautioned about what he called the "Iranian threat" and the need for Washington to respond to it.

What consolidated the Saudi disappointment in the limit of the aggression is what the Wall Street Journal revealed. Two days ago, the newspaper reported that the Trump administration is considering a project to replace its forces in Syria with troops from Arab countries. The newspaper quoted US officials as saying that contacts were made with the Egyptians while Saudi Arabia, the United Arab Emirates and Qatar were told about the idea of sending their troops to replace the US forces because Trump - according to the newspaper and confirmed by the White House spokeswoman a few days ago - is insisting on withdrawing US forces from Syria as soon as possible.

Jim Reese, a retired Marine colonel (Delta Force), spoke about this plan in an interview with US broadcaster Fox News hours before the tripartite assault on Syria. Reese said he knew that the Pentagon is currently considering a plan for US allies to deploy in the areas where the Americans are located in Syria. He names Saudi Arabia and the UAE at the top of the list. He sets the area of deployment (which he says they own) from Ain al-Arab in the north heading downward to the last point controlled by the Americans along the Euphrates. He hinted that the Saudi Crown Prince Mohammed bin Salman discussed the matter with Trump during his visit to Washington, adding that the goal is to form the East Euphrates Force that stands in the face of the Syrian and Iranian forces located west of the river.

Reese spoke about this plan in a second interview with Fox News hours after the tripartite aggression and in a third interview on Tuesday. The fact is that this plan existed since 2015 and is not new. Back then, Senator John McCain and Lindsey Graham (known for their strong ties to the Saudi regime) were eager to promote it.

McCain and Graham proposed the idea of forming a ground military force made up of 100 thousand fighters. 90 percent of the armed forces would come from Arab states, including Saudi Arabia, Egypt, the United Arab Emirates and Jordan, while only 10 percent would be made up of the US-led Western forces. The objective of deploying this power, according to McCain and Graham, is to fight both President Assad and Daesh. They believed that the "threat of Assad's survival" will strengthen Iran's presence in Syria and will give a signal from Washington that it remains committed to defending its "allies" in the region, despite the negotiations on the nuclear agreement with Iran at the time.

It is very clear that the Trump administration knows very well that the task of protecting its 2,000 soldiers after launching the tripartite aggression against Syria has become a difficult one. So it seeks to calm the anger of the American populist movement (Trump's electoral base) which rejects military adventures and to minimize its losses while ensuring what it calls "filling the void" in areas it controlled with troops from its satellites. The Egyptians are busy fighting the terrorist groups in Sinai and controlling their borders with Libya. Saudi Arabia and the UAE are involved in Yemen, and Jordan is not interested in engaging in such a project that will expose it to danger. It is the one who seeks to restore its relationship with Damascus. And the Turks renewed their commitment to the Astana path after the tripartite aggression even though they declared their support for it. Thus, it is a stillborn plan as its implementation seems almost impossible. It is most likely that Trump may seek to raise the ceiling of the price of his withdrawal, which he is mainly demanding from the Saudis, by maneuvering and threatening to withdraw immediately unless Mohammed bin Salman pays the price he requests.