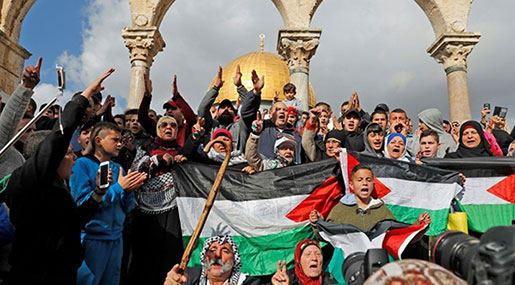 When the Maqdisi [Jerusalemite] weapon is his body, the battle from start to finish becomes a battle of will. The dominant faith of the people of Al-Quds is challenging the armed "Israeli" soldiers and police unarmed. That is what the residents of the West Bank and the Gaza Strip say. The mere lifting of the Palestinian flag signals the start of a battle in which more than twenty soldiers gather around one person to take the flag away. This is a small scene of the Intifada memoirs in Al-Quds. 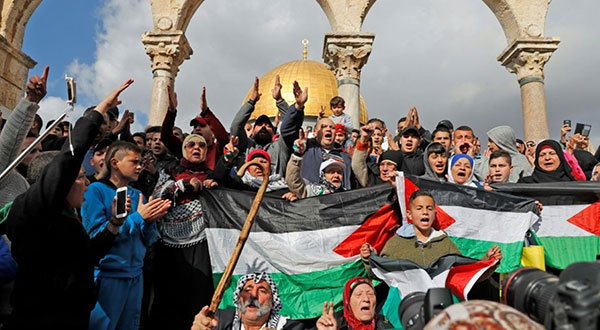 At 5PM Al-Quds time, the youths will chant: "From border to border, every inch of you will return." Then the voices will rise louder and louder: "Unity, national unity, all of AlQuds is Arab." This is what the scene has become in Bab Al-Amoud during the evenings these days. But it does not stay the same for long. Suddenly young people take out the Palestinian flags, which infuriate the "Israeli" police. The Maqdisis always decide to highlight what unites them and affirms the Arabism of their city. They dream that the temporal and spatial expansion of Arabs and Muslims in the city will prevail. This is how they regard the Palestinian flag; it is one with the gate of Al-Quds and its Ottoman wall, as if "Israel" had nothing here.

At this moment, the ["Israeli"] soldiers are amassing and frowning - they try to make their faces look like a knife that can cut anything. The soldiers take turn watching the protesters who are holding their country's flag while the others look at their commander, who orders them to move and practice the "hobby" of oppressing the Mdqdisis. The orders are given to put down this dreaded flag, and if possible have it torn-up and stepped on. The most important thing is not to leave it raised.

This is how the battle for the Palestinian flag begins. One of the enemy's soldiers attacks to snatch the flag from the hand of the one lifting it. His heavy, large hand falls on the flag, trying with all his might to strip it from its owner. But he is surprised that this is not an easy process, and his military training did not teach him how to snatch the flag. The young men are doing their utmost to preserve what has become a symbol for their home, land, and Al-Quds.

Another soldier joins the battle to wrest the flag and help his friend win. Then, the soldiers multiply, forming a large mass around one Palestinian. The sight of this hybrid human mass of several nationalities is horrifying. Only weapons scattered on the backs of the soldiers and their legs can be seen. As for their hands and feet, they are hitting and kicking the Palestinian, who lost his strength and is on the ground, on his head, back and feet.

While the young man's body fuses with the land of Al-Quds, the soldiers tie his hands behind his back, take the flag from him, and drag him to the interrogation center and then to a prison cell. Despite that the unarmed protesters try to free him from the hands of the soldiers, but the military rings that surround him and gradually expand prevent them from doing so. At this moment, another Palestinian flag flies again. The scene is repeated, more arrests until the demonstrators are attacked.

Near Bab al-Amoud, which has become the most important and symbolic place for demonstrations, is Sultan Sulaiman Street that borders it to the north. There, dispersing the demonstrators is not only limited to suppressing and threatening them with arrest, the cavalry squad of the "Israeli" police also take part. The black horses have prominent muscles and a height of some two and a half meters. When they approach, one no longer feels that they are the gentle animals raised and domesticated by humans. They stalk the demonstrators with a level of hate equivalent to that of the "Israelis." Not only do they intimidate and attack them, but they also drown them with their manure, perhaps to add to their psychological pain.

All of the above has become a daily sight in the occupied city since US President Donald Trump stood on his platform on December 6 and delivered his speech in which he said: "It is time to officially recognize Jerusalem as the capital of "Israel"." The streets of Al-Quds rose as a result especially during the first Friday following Trump's declaration.

That Friday has a story in Al-Quds. Palestinians coming from the West Bank, Al-Quds and the other cities gather after performing Friday prayers in the Al-Aqsa Mosque. Their chants takeover the mosque's courtyards as the worshippers decide to march towards Bab Al-Amoud. A human flood almost sweeps away all that comes in its way. They march towards Bab Al-Nasser, one of the gates of Al-Aqsa, at a uniform pace. Facing them are dozens of soldiers, trembling and gathering at the corner of the gate not trying to intercept the demonstrators.

The lucky one was the one at the front of the march. He feels as if he posses super powers as thousands of Palestinians and Muslims of other nationalities march behind him. They empower him as he approaches the military checkpoint and the dozens of soldiers who closed the road connecting Bab al-Amoud and al-Aqsa to pierce the barrier at all costs.

On the other side, the occupation soldiers amass more and more as the demonstration approaches. The way in which they stand makes you think that an ant cannot get through them. But soon this belief falls apart when the distance between the demonstrators and the soldiers narrows. The fight begins. It does not discourage the demonstrators from reaching Bab Al-Amoud. The scene of amassing, chanting, arrests and the crazy oppression begins. The only difference from one day to the next, during the daily Maqdisi scene, is that the old faces who came out the day before are replaced with new ones who are also arrested. Meanwhile, the occupation increases the number of its soldiers and barricades as much as it can.