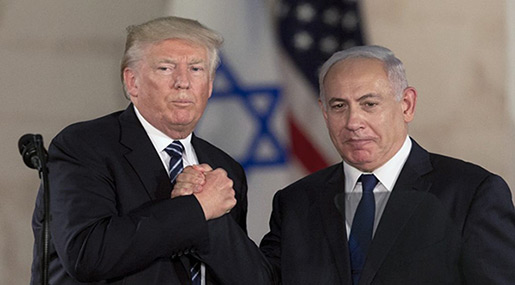 His former top aides have said that he is unfit for office. He is surrounded by a swirl of scandal. His family is not helping matters, with crazy statements that are intended to be supportive but just make matters worse. He is dependent on the far right and is so politically vulnerable that he is making decisions that put his entire country at risk. He has targeted groups on the basis of religion and background, which could lead to great unrest. You look at his record and you start wondering if he is drawn to the extremists because he really is one. 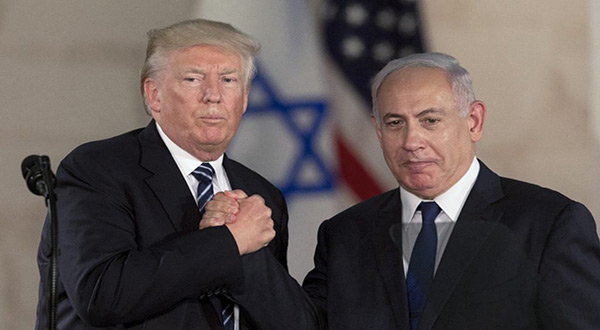 In any event, he has brought his country's democracy to a moment of crisis - one that has profound international ramifications.

The "he" I am referring to is Prime Minister Benjamin Netanyahu, "Israel's" Donald Trump.

What makes matters worse for Netanyahu that he is smarter than Trump and he has infinitely more experience in government. Whereas President Trump is weakening America, Netanyahu, known as Bibi, has Israel hurtling toward an existential crisis, one largely due to the very Trumpian move to choose identity politics over decency and democracy.

Trump is beleaguered by the recent events in Charlottesville and his inflammatory reaction to them, the departure of his top aides in recent weeks, and the ticking crocodile of Robert S. Mueller III's investigation, a noise that he, like Captain Hook, can't seem to escape.

In "Israel", Bibi has his own corruption scandal. His son this past week offered his view that leftists were more dangerous than neo-Nazis, a remark that probably made his father wish quietly to himself that he could trade his offspring for one of those smart, well-spoken Trump boys. Then again, Bibi himself recently said that the left in "Israel" had mounted an "obsessive witch hunt" against him in pursuit of what he characterized as a "coup." In the same speech to members of his own Likud Party on Aug. 9, he also accused the "Israeli" media of trafficking in "fake news" in its efforts to bring him down.

"Israel" can afford Bibi far less right now than the United States can the unfit, out-of-control leader it has in Trump. The United States has more history to draw on and more resilient systems. "Israel", for all its successes, is still an evolving idea in a hostile region. The country is dependent not on the strengths of democracy but on its selective application of it, in the suppression of its majority population in order to survive.

This week, one of the Trump administration's most admired and effective appointees, negotiator Jason Greenblatt, went to the Middle East with one of its most controversial and least experienced, Jared Kushner, to discuss what White House sources have called a "path to substantive ‘Israeli'-Palestinian peace talks."

Given the stereophonic political meltdowns Netanyahu and Trump are having at the moment and the very real prospects that their crises will get worse before they get better, this latest initiative was, as a former US ambassador to Israel recently suggested, "dead in the water" before they got started.

Matters are not helped by the fact that the other essential party to these talks, Palestinian President Mahmoud Abbas, is 82 years old and is himself very weak politically. Trump, Netanyahu, Greenblatt and Kushner knew the likelihood that this Middle East mission would fail is high. But that hardly matters. The trip was political theater, a manufactured bread-and-circuses distraction from current damning headlines and plummeting polling numbers that both governments desperately want and need.

Shockingly, echoing Trump, the self-proclaimed prime minister of the Jewish people took days to release a brief statement about the anti-Semitism in the streets of Charlottesville, and he said nothing about Trump's effective defense of those anti-Semites. In other words, Bibi apparently cares more about his political survival [both he and Trump have underwater poll numbers] than he does about the well-being of the Jewish people he has taken it upon himself to "represent." For the record, he sure doesn't represent me.

The similarities are uncanny. But they are hardly an accident. The far right in "Israel" and in the United States have merged in their rhetoric, their tactics, their contempt for the core values of democracy, their inherent racism [both against Muslims, with Trump adding his contempt for black people and Mexicans for good measure], their love of walls, their hatred of Iran, their scandals and, more broadly, the growing sense that both are driven more by a desperation for self-preservation than by any sense of commitment to their national interests.

This week's trip is evidence of what such a mind meld can produce. Rather than peace or progress, something new is arising in the history of cooperation between the United States and "Israel" - a mutual political defense pact that involves the transfer of short-range tropes, medium-range memes and weapons-grade hate against the populations that will soon be the majority in both countries, regardless of the worst efforts of these damaged leaders or their malignant, most-militant core supporters.