In response to the US claims, the Russian defense ministry confirmed that Russian and Syrian warplanes did not launch airstrikes on an aid convoy that was attacked en route to Aleppo. 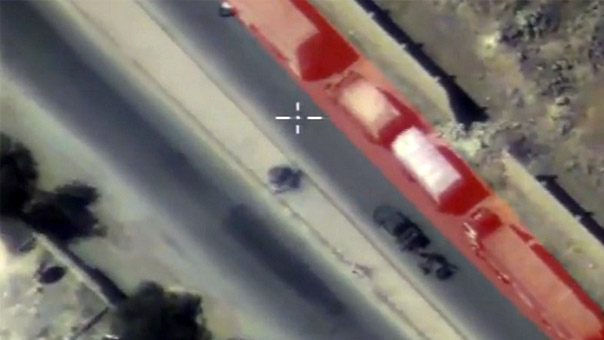 The ministry clarified that only the militants who control the area had information regarding the location of the convoy.

"Russian and Syrian warplanes did not carry out any airstrikes on a UN humanitarian aid convoy in the southwest of Aleppo," Defense Ministry spokesman Igor Konashenkov said in a statement Tuesday.

The Russian Center for Reconciliation said that it had used drones to accompany the convoy because its route passed through territory controlled by the rebels, but only to a certain point.

"Around 13:40 Moscow time the aid convoy successfully reached the destination. The Russian side did not monitor the convoy after this and its movements were only known by the militants who were in control of the area," Konashenkov added.

The Defense Ministry spokesman said that the Russian military had been looking at video footage from the scene and that there was no sign of the convoy being targeted by shells or an airstrike.

"We have closely studied the video footage from where the incident took place and we did not find any signs of any ammunition having hit the convoy. There are no craters, while the vehicles have their chassis intact and they have not been severely damaged, which would have been the case from an airstrike," Konashenkov said.

"All of the video footage demonstrates that the convoy caught fire, which strangely happened almost at exactly at the same time as militants started a large scale offensive on Aleppo."

The Red Cross said that at least 20 civilians and one aid worker had been killed after what the organization believed was an airstrike struck the 31-truck convoy.

The aid worker was identified as Omar Barakat, the director of a sub-branch of the Syrian Arab Red Crescent [SARC], which was helping with the delivery of aid intended to reach rebel-held areas of Aleppo.

On Tuesday the United Nations has reversed allegations that its aid convoy in Syria was the target of an airstrike. "We are not in a position to determine whether these were in fact airstrikes. We are in a position to say that the convoy was attacked," UN humanitarian spokesman Jens Laerke said.

The UN spoke of a draft error while referring to the initial term of ‘airstrike.'
Meanwhile, the UN said it will be suspending all its aid convoys while the security situation in Syria is assessed.

"As an immediate security measure, other convoy movements in Syria have been suspended for the time being pending further assessment of the security situation," UN humanitarian aid spokesman Jens Laerke said. He added that the UN had received permission from the Syrian government to deliver aid to all areas of the country.

The International Committee of the Red Cross [ICRC] is also postponing an aid convoy that was to deliver supplies to four besieged Syrian towns.Meanwhile, a Syrian military source refuted the reports circulated by malicious media outlets about the Syrian Arab Army targeting a humanitarian aid convoy in Aleppo countryside.

The source stated that there's no truth to the rumors circulated during the past few hours by some media outlets about the Syrian Arab Army targeting a humanitarian aid convoy in Orkem village in Aleppo's northern countryside.

Earlier, the Kremlin said it was assessing the situation, while Vladimir Putin's press secretary, Dmitry Peskov, said it would be incorrect to make hasty conclusions when trying to apportion blame.

"I do not think it is possible and correct to make unfounded conclusions. At the moment, our military is checking information regarding the airstrike and I hope they are getting concrete information from first-hand sources that were present in order to present their own findings," he said.

"We know that the Syrian armed forces, who for the whole week have been the only party to have kept to the terms of the ceasefire, had to respond to this offensive," he said.