Hizbullah Secretary General His Eminence Sayyed Hassan Nasrallah stressed Friday that nothing is to humiliate the Resistance and its people. 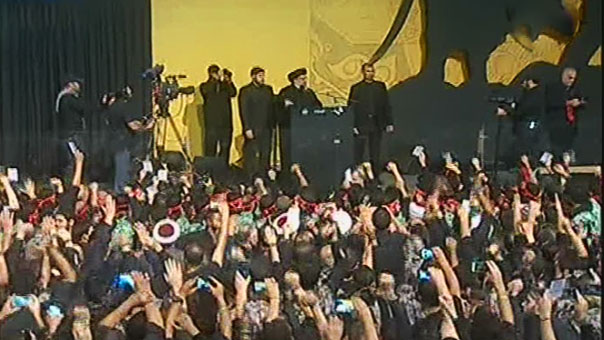 In a speech he delivered at Sayyed Sayyed Shuhadaa complex in Dahyieh [Southern Suburbs of Beirut], Sayyed Nasrallah reiterated that Imam Hussein [PBUH] is a school that we learn from through our hearts. "It taught us all stances of pride, steadfastness, sacrifice, and honesty."

As His Eminence joined the crowds commemorating the tenth night of Ashura, he thanked all those who took part and held responsibility throughout these nights and helped preserve the security of these gatherings.

"We thank the Lebanese army and all official security agencies who exerted major efforts to secure the safety of all participators in all the Lebanese regions," he said.

On the political level, Sayyed Nasrallah explained that "the US is an inheritor of the old colonial powers and other forces such as France and Britain."

He further added that Washington is are seeking to impose hegemony over our region and countries. "They want the region to be under their political, military, security, economic and cultural control."

"The US is are after the region's oil, gas and riches," the Resistance leader said, noting that "the weak Arab and Islamic countries cannot even set the price of oil." 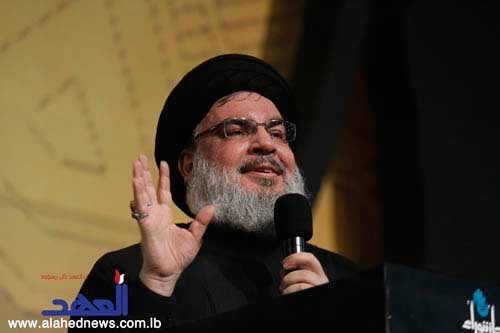 Commenting on the US continuous support to "Israel", Sayyed Nasrallah elaborated that ""Israel" is an executive tool in implementing the US hegemony in our region."
"The Palestinian people as well as the people of our region are suffering as the result of the US policies," His Eminence mentioned.

Moreover, he highlighted that ":If the financial, economic, and military support that Washington grants Tel Aviv stops, "Israel" will definitely fail to exist any longer."
""Israel" will lose its ability to survive in our region if America weakens," he said, recalling that "the Palestinian people are suffering the burden of the US hegemony over our region."

According to His Eminence, "the US and the successive American administrations are to blame for all of "Israeli" actions, even more than Netanyahu and his terrorist army."
"The United States is always there to engage in wars in case the Zionist entity is in danger," he clarified, pointing out that "the US wants us to accept "Israel" under the threat of waging all kinds of wars against us."

"Palestinian people and the people of the region on top of which is the Lebanese who suffered from "Israeli" occupation and massacres carry the burdens of the American domination project."

In an attempt to explain some aspects of the US domination to our region, the Resistance leader confirmed that "who controls America is not human rights organizations, but owners of large oil and weapon companies."

"He, who is free and seeks takes his own decisions on the basis of his country's interests, is unacceptable by the Americans."

As His Eminence denounced some regional powers for being US regional puppets, Sayyed Nasrallah emphasized that " this governments in the region are nothing but local administrations headed by a king or a president, because the decisions of war, peace, foreign policy and markets are in the hands of the US."

" All of America's talk about human rights and democracy is meaningless because the biggest dictatorships in the region are sponsored by the US," he stated.

"Why do the countries under US control have no freedom or political turn over?" he asked. "Yet free countries are always under scrutiny, even though they seek to change their political systems, and are threatened with economic sanctions or wars."

On this level, Sayyed Nasrallah mentioned that the US does not want even strong friends because they may bother it in some situations.


Moving to the US hypocrisy in dealing with the Iranian file, he recalled that "since 12 years, there is something called the Iranian nuclear file."

"All the problem with Iran was that it wanted to be a free and independent country that owns all its goods and preserves the dignity of its people, and this is prohibited by the Americans. They claimed that Iran seeks to establish a uranium military. The US claim that Iran had been seeking a nuclear bomb was a lie that lasted 13 years and could have led to a regional war."

He also recalled how Washington called the international community to intervene under the flag of confronting the Iranian nuclear weapons.

On this level, Sayyed Nasrallah mentioned that hours ago the Russian President Vladimir Putin stated: "the US has lied and misled the international community on the level of the Iranian nuclear program."

US War by Takfiris

Regarding the takfiri threat to our region, he stressed that "today, after the "Israeli" successive defeats in Lebanon, the 2006 victory and the "Israeli" defeats in Gaza as well as the US defeats in Iraq and Afghanistan, the US launched a new war in the region, that is of the takfiris."

"It is a US war against all those who confront the US hegemony," he said, noting that "the real leader, and coordinator of the takfiri scheme in the region is the US and its regional friends."

Moreover, Sayyed Nasrallah asserted that "those militants fighting against Syria are led by the US, whether they knew or not. Those fighting in Syria today, whether Islamist or secular, are serving the US interests."

"The war in our region isn't for reforms, human rights, democracy, poverty, and development. It seeks all those who stood in face of the US administrations."

According to His Eminence, "The ongoing war is not for the sake of reforms, democracy, human rights, poverty or countering ignorance but it is rather aimed at subjugating those who rejected the US scheme and punishing those who defeated the New Middle East scheme in 2006."

"Washington in an accomplice in the crimes committed by the Zionist entity," he said, adding, "All of America's talk about human rights and democracy is meaningless because the biggest dictatorships in the region are sponsored by the US. America backs the worst dictatorships and corrupt regimes in the region that violate human rights and give no concern to elections, constitutions." 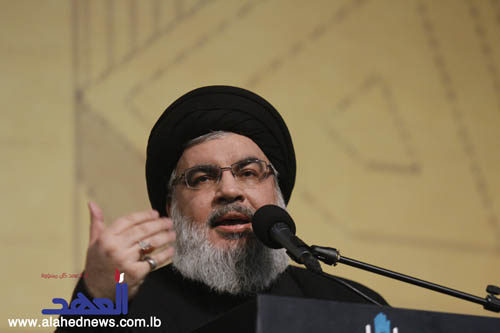 He went on to say,"they threaten us that you other surrender to our will, and schemes or you are before suicide bombers targeting your mosques and worship places ."

However, Sayyed Nasrallah assured that the Lebanese Resistance, Syrian President Bashar al-Assad's government, Palestine and Iran defeated the Western so-called 'New Middle East' scheme and "the US wants them to pay the price. This is how we should interpret the current battle."

Accusing the Saudi Kingdom of serving the US interests in the region, he reminded that at the beginning of the Saudi aggression against Yemen, "one cleric spoke in the Holy Mosque in Mecca and said that this war is a war against the Shiites."
The current war isn't against the Shiites. They just want to mobilize so that mercenaries would take part in the war so that they go to war instead of their dull and weak people and army."

"The Arab countries are merely tools in the U.S. war against Syria, Iran and Yemen. The US has been seeking to provoke Sunnis in Syria, Iraq and Yemen and involve them in a battle on behalf of their leaders... but they failed."

Sayyed Nasrallah further warned that "they want to transform the war on Yemen into a sectarian war."

Similarly, His Eminence highlighted that "the US and its allies provided "ISIL" terrorist group with money and weapons in Iraq after it was kicked out of the country."

"After its defeat in Iraq, the US wanted to threaten the Iraqis that no one will protect you from "ISIL" and its brethrens, except America," he said.
He also went on to explain that " The rival front is not led by al-Jolani, al-Zawahiri or al-Baghdadi, but rather by the United States."

In parallel, Sayyed Nasrallah noted that "after the so called "Arab Spring" America waged a new war, a war on everyone who refuses to submit to the American domination."

"Today they tell us that we either be slaves for America or they will besiege us and send us suicide bombers."

To such bet, Sayyed Nasrallah sent a sounding response: "We assure that we will follow the path of Imam Hussein and stand in the face of all these threats and say "We shall never be humiliated!"

"Today the battle is to preserve Islam, and values. Those betting on our retreat and surrender by counting our martyrs' numbers are deluded. W assure you that in our battle will never surrender or give up. In Karbala everyone was martyred, and we are ready to continue in this until the end."

In addition, His Eminence confirmed that "we will keep standing in the face of
"Israel", its threats, and wars as well as in the face of the takfiris."

In conclusion, Sayyed Nasrallah vowed: "We will not back down in this battle if anyone is betting on this. This is a battle that we believe in and we will win it."

"Neither rain nor booby-trapped cars will prevent us from meeting our master, Imam Hussein."