Hizbullah Secretary General His Eminence Sayyed Hassan Nasrallah delivered Sunday a speech in which he tackled various topics on top of which is the takfiri threat.

On the 15th anniversary of the Liberation and Resistance Day i.e. marking the humiliating defeat of the "Israeli" enemy, His Eminence recalled that "these are the days of your triumph, the triumph of blood over the sword. I congratulate you and all the Lebanese, Arabs, Muslims and free people of the world." 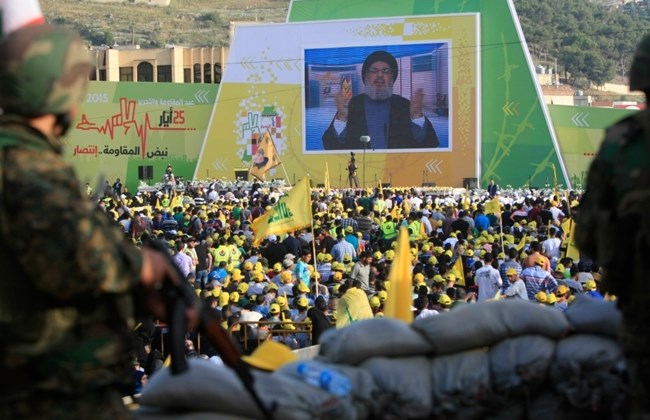 Sayyed Nasrallah pointed out that what we are witnessing these days is a repetition to history in different labels and names. His Eminence stated that "some Lebanese were betting on the "Israeli" invasion ...and some sides were talking about the "Israeli" as a friend and ally."

Back to the 1982 Zionist invasion to Lebanon, he mentioned that "the Lebanese had conflicting interpretations, but some Lebanese diagnosed the Zionist threat in a correct way."
"Unfortunately, some Lebanese had a different vision and they cooperated with the "Israelis" and took part with them in entering some areas and making arrests."

On the Lebanese positions from confronting "Israel", Sayyed Nasrallah said: "Some saw no problem in the invasion, although they neither coordinated with "Israel" nor sympathized with the Resistance. Others shared the resistance its vision, but they stood idly by because they settled for their inability."
In parallel, His Eminence reminded how the Resistance started in Beirut and spread to Mount Lebanon, western Bekaa and the South.

On the occasion of celebration, Sayyed Nasrallah confirmed that "this victory was achieved by some of the Lebanese who believed in Resistance."
However, "This part of the Lebanese who achieved the victory wanted it to be for all Lebanese. From the very first day, the Resistance believed that it was defending all the Lebanese people, and all the backstabbing and treason did not prevent it from dedicating its victory to all of Lebanon, the Arabs and the world."

"Had it not been for the liberation, where would have a large part of the Lebanese been?" he wondered.
His Eminence also highlighted that "some Lebanese did not wait for the Arab League, the Security Council, the UN, the US or the West, they rather relied on their capabilities, men, heroes and friends in Iran and Syria and the resistance was launched."

Moving to the Takfiri threat, Sayyed Nasrallah emphasized that "history is repeating itself and the scheme that is threatening the region is this brutal takfiri scheme that we are witnessing now."

On this level, His Eminence warned that "the biggest manifestation of this scheme is Daesh [The Arabic Acronym for "ISIL"], as we are before a scheme that is moving on the ground -- it is killing, abducting, slaughtering and destroying."
"Daesh is the headline of this period and it is not a small group. It is present in Syria and Iraq, in Sinai on Palestine's border, and in Yemen, Afghanistan, Pakistan, Libya, North Africa and Nigeria, and it has recently showed its presence on the ground in Saudi Arabia's Qatif," His Eminence cautioned, condoling the families of the martyrs, who fell in the terrorist bombing that targeted the worshippers in al-Qdeih.

In addition, Sayyed Nasrallah elaborated that "al-Nusra Front doesn't differ from Daesh."
"Al-Nusra is similar to Daesh but it is confined to Syria, although it has been recently rebranded the Army of Conquest. Although they are followers of the same ideology, the members of al-Nusra and Daesh are killing and beheading each other."

As Sayyed Nasrallah warned that the region is "before a danger that is unparalleled in history," he called for understanding the type of such threat. "Some are saying that there is no threat and some are standing aside while some consider these groups to be allies."

On this undermining this threat, His Eminence presented the following questions: "How did Daesh act towards the Sunnis who did not cooperate with them? How did it act towards those who cooperated with it but refused to pledge allegiance? They were faced with massacres."
"We are before a threat that does not tolerate the existence of others. All people in the region are facing this barbarous situation and only the lives of those who endorse their ideology and pledge allegiance to their "Caliph" would be spared," he stressed.

To those who believe that their silence over the takfiri threat would protect them and their sect, he asserted that "they are delusional."
"With all brotherly talk, the first victims of al-Nusra and Daesh in Lebanon would be the Future movement and its leaders. Who owes a guarantee? It is unacceptable to wait and we must take the initiative and seek means to engage in the confrontation."

To Lebanon's Christians, Sayyed Narallah said: "Who will protect your women from enslavement and your churches from destruction?"
He urged on everyone in Lebanon and the region to shoulder their responsibilities in the face of the threat and to end their silence and neutrality.

US Not To Protect Anyone

According to the Resistance Leader, "the US cannot protect anyone in Syria, Iraq or Lebanon from Daesh."

"What has the US-led coalition done to protect Iraq and Syria from "ISIL"?" he questioned, pointing out that "the number of their airstrikes throughout a year is much less than the number of "Israeli" raids on Lebanon in the July war or its raids on Gaza."
"Everyone knows that "Daesh" is moving from province to province in Syria and Iraq under the eye of the United States."

To those betting on the US anywhere in the world, Sayyed Nasrallah called "to observe what happened in Mosul and Ramadi. The Iraqis who did not wait for the Americans managed to recapture several regions."

In addition, His Eminence sent a clear advice to the Lebanese sides, particularly March 14. "You have your calculations but the officials of the so-called Syrian opposition coalition cannot represent a guarantee for you since Syria is divided between Daesh and the Syrian troops."
"They cannot even return to the Syrian regions that are under the control of Daesh and al-Nusra. Thus, you must fear Daesh if it is triumphed and not the victory of the other side."
He wondered: "If the regime and its allies win in Syria, we would represent the guarantee for all Lebanese, but if Daesh and al-Nusra win, who would guarantee your safety?

In parallel, Sayyed Nasrallah called them to defend your land, sovereignty and people.
On the Qalamoun battle, he announced that the confrontations will continue until the Syrian army, the National Defense Forces and the Lebanese Resistance manage to secure the entire Lebanese-Syrian border.

"When the bomb attacks were tearing our flesh apart in Hermel, al-Nabi Othman and Dahiyeh [Southern Lebanese Suburbs], we were telling that Arsal's people are our people and that we don't tolerate any harm against them."

To the people in Arsal, His Eminence said: "The vast majority in Arsal are feeling the heavy burden of the militant groups and we are ready to stand by Arsal's people, but the state must shoulder its responsibility."
"You are saying that this is the responsibility of the state and the interior minister has said that the town of Arsal is occupied by the armed groups. Let the Lebanese state regain the town."

He also accused the US embassy of funding the "psychological warfare" against Hizbullah to try to make it appear fragmented and weak. His Eminence said no time has passed since the resistance was born in 1982 when Hizbullah was larger, better equipped and more determined than it is today.
"Shame on your attempts to exaggerate the number of our martyrs," Sayyed Nasrallah said. "Do you think we understate our martyrs? Are embarrassed by them?
"It is thanks to the martyrs and the wounded and the captives that you are living in security and safety in this country," he added, declining the talks that Hizbullah has called for general mobilization.

Commenting on such talk, the Resistance Leader said: "It is too early for that. If Hizbullah's leadership takes the decision to be present in the battlefields, you will witness the presence of tens of thousands of our fighters."

As His Eminence hailed the "army-people-resistance" equation, he underlined that it is now being implemented in Syria, Iraq and Yemen.
"In the face of this threat which is not less dangerous than the "Israeli" one, it would be delusional to partition the battle."

In response, he called for unifying the fronts as it is unfeasible to fight in a segregated manner.

"We are fighting alongside the Syrian army and popular resistance based on our vision that fighting there is aimed at defending everyone in Lebanon, Palestine and Iraq," Sayyed Nasrallah underscored.
He further revealed that the Resistance's presence will become bigger if the need arises and I confirm that we are present in many regions in Syria.

As he called the Saudi Kingdom to end its brutal aggression on Yemen, he advised the Bahraini regime to end the political trials and release the political prisoners.