Characters of "Happily-ever-after" childhood stories are the heroes and heroines of his works. Characters of international children literature fill his website, yet to rather reflect dark and sad realities we live today.

Writing under pseudonym Saint Hoax, the Beirut-based artist has called attention to very important realities that children and youth have been facing face.
Hoax has recently published three posters tackling a just cause; the ongoing "Israeli" violent assault on the Gaza Strip.

It is not ‘once upon a time' that entitles Hoax's collection, instead its ‘once upon a war'; a war that has drawn so much innocent blood.

His latest novelty was turning famous literature characters into victims of the "Israeli" bloody war- in a call to save their innocence- but these children hold tight to the flag of Palestine.

In another, "Israeli Justice" Minister Tzipi Livni stands over Alice, of the ‘Alice in Wonderland', with a slayer's knife.

In a third image, "Israeli" Prime Minister Benjamin Netanyahu is thrashing the lifeless body of Pinocchio, who lies bloodied near a Palestinian flag.

The choice of these characters, according to the writer Mostafa Khazem, is no coincidence.

Peter Pan: The Boy Who wouldn't Grow Up 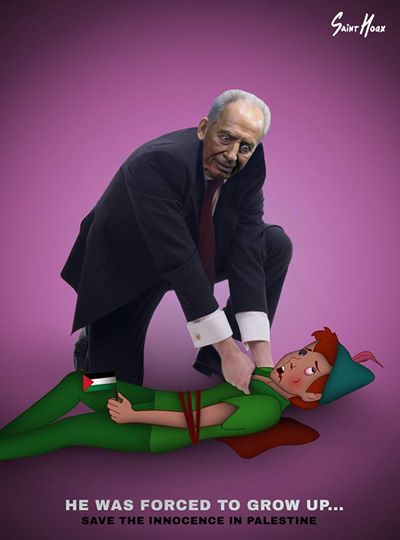 Peter Pan, the first character of the posters, first appeared in a section of The Little White Bird, a 1902 novel written by J.M Barrie for adults.

Peter Pan is a character created by Scottish novelist and playwright J. M. Barrie. A mischievous boy who can fly and never grows up, Peter Pan spends his never-ending childhood adventuring on the small island of Neverland as the leader of his gang, the Lost Boys, interacting with mermaids, Native Americans, fairies, pirates, and occasionally ordinary children from the world outside of Neverland.

Peter Pan was first dubbed as "The boy who wouldn't grow up".

Back to Hoax's poster that read "He was forced to grow up", Peter's hands were tied while Perez was trying to choke him. This choice, according to Khazem is no accident. Shimon Peres was notorious for breaking the hands of Palestinian children during the Intifada, and he was the leader of the ‘Grapes of Wrath' that killed dozens of children in Qana South Lebanon in 1996. 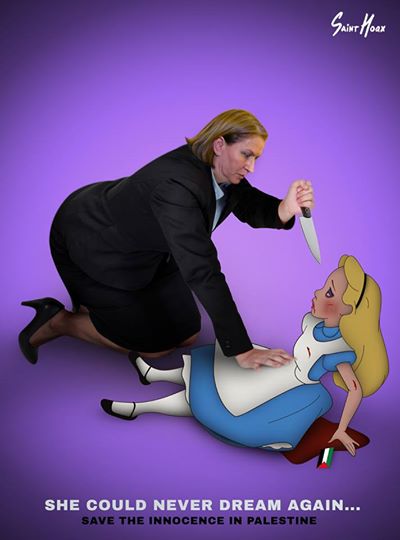 Alice's Adventures in Wonderland (commonly shortened to Alice in Wonderland) is an 1865 novel written by English author Charles Lutwidge Dodgson under the pseudonym Lewis Carroll. It tells of a girl named Alice who falls down a rabbit hole into a fantasy world populated by peculiar creatures, and ends with Alice waking up from a beautiful dream.

Alice, in Hoax's poster is being slaughtered by Livni. Why? Because Alice throughout her journey faces trouble with the wicked Queen of hearts, who tries to get rid of Alice by all means possible.

Livni kills the innocence of Alice, who will never get to dream again. 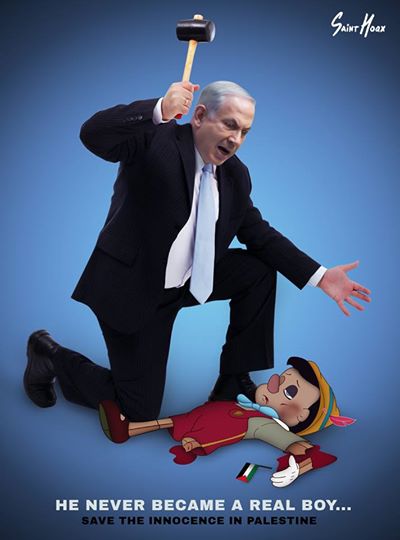 Pinocchio is a fictional character and the main protagonist of the children's novel The Adventures of Pinocchio (1883), by the Italian writer Carlo Collodi. Carved by a woodcarver named Geppetto in a small Italian village, he was created as a wooden puppet, but dreamed of becoming a real boy.

He has also been used as a character who is prone to telling lies and fabricating stories for various reasons.

The link here, according to Khazem is the big fat Netanyahu liar has dissected Pinnochio, who will never be a real boy.

This is the fate of Gaza's children, who are deprived of their dreams, of their desire to be normal kids who enjoy a normal life, at the time the Zionist killers of these children enjoy a life of their own interests.

Hasn't the time yet come to say by word, picture and sword: Protect the innocence of Palestine?!