With the White House yet to give a full clarification on reports that the US trained the so-called "Islamic State of Iraq and the Levant" [ISIL] recruits in 2012, another damning information has been leaked. 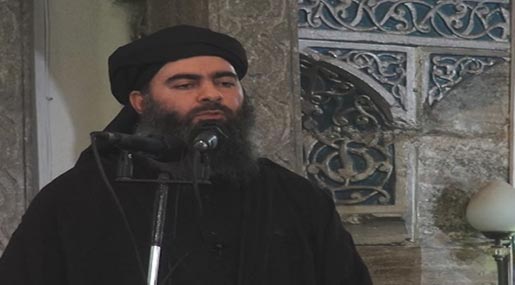 It has now emerged that Abu Bakr al-Baghdadi, the leader of the terrorist group, was trained by Mossad, with the help of the US and the UK intelligence officials.
The revelation was leaked by former National Security Agency [NSA] contractor and whistleblower Edward Snowden.

As per a report in Gulf Daily News, Snowden revealed that the US, the UK and "Israel" drew up a plan to protect the Zionist entity, by using a strategy called "the hornet's nest".

The strategy was to get all the terrorists together in one place under an "Islamic" slogan and engaging them in a war far from Israel.
In the documents leaked by Snowden, it added that the "ISIL" was made for "the protection of the "Jewish state"", and thereby keeping the enemies of "Israel" engaged.

Snowden's leak also revealed that ISIL leader al-Baghdadi was given intensive military training for a whole year by Mossad, besides lessons on Islam and public speaking.
Multiple reports have stated that the US played a key role in training the recruits, who later become ISIL "jihadists".

The WND had reported back in February 2012 that the US, along with Turkey and Jordan, was running a training base for Syrian armed groups.
And these trained rebels reportedly turned against the US later and went on to form the ISIL.

Thousands of rebels were trained in 2012 and 2013 in Jordon, German weekly Der Spiegel reported.
The report went on to note that the organizers of the training camps wore US Marine uniforms, and the recruits were trained in anti-tank weaponry.