Hizbullah Secretary General His Eminence Sayyed Hassan Nasrallah tackled a number of internal and regional political issues via a televised speech on Saturday, as he sponsored the inauguration of Jabal Amel forum for Culture and Literature, also the victory theater in the Lebanese southern town of Ainatha. 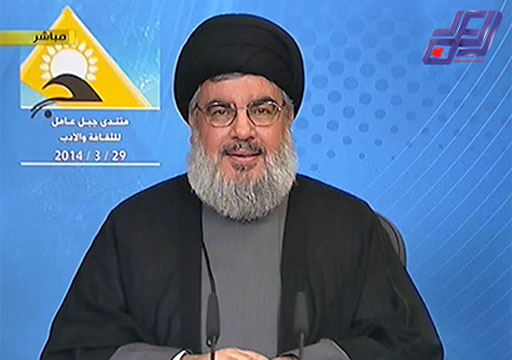 On the first level, Sayyed Nasrallah hailed "the inauguration of this forum that joined the blessed, continuous , and [God willing] victorious march, each according to his competence and role." He stressed the importance of language, words, and speech that man uses to deliver his opinion to others.

"Literature and poetry must be part of the nation's powers and civilization," Sayyed Nasrallah said, and pointed out that "Jabal Amel is known for its scientific and religious heritage as well as its famous scholars in the Islamic world."
Hizbullah Secretary General mentioned: "Among the achievements of Jabal Amel's poets and authors is preserving and defending the Arabic language against attempts to westernize it or replace it with the Turkish language."

Moreover, His Eminence stated: "Jabal Amel has always been a committed platform for national issues and the nation's moral, political, and jihadist causes."
As His Eminence urged the Islamic nation to preserve and defend the Arabic language, he recalled the era "when Jabal Amal writers and scholars transformed houses into institutes to teach the Arabic language to enable future generations to preserve and defend it against illiteracy and ignorance."

"The scientists and writers' main concerns were facing the Zionist expansion in Palestine, preserving the nation, and preventing the division," Sayyed Nasrallah elaborated.

On the level of the Resistance, His Eminence affirmed: "The only option our people have is resisting in all means, through security, military and cultural efforts. Jihadism, resistance, sacrifices and survival are all an expression of this culture."
"The controversy surrounding the Resistance has nothing to do with our presence in Syria... It doesn't also go back to 2006, 1982, or the early 1970s. It has been there since the establishment of the Zionist entity. The [controversy] is not related to a party, an organization, a sect, or a region."

He also added: "The discussion over the resistance is not limited to or exclusively linked to a certain person, a group of people or a region. This discussion has been there even before Hizbullah and Amal's resistance, and even during the time of the secular resistance."

"This debate was before and after Imam Moussa al-Sadr," he said.

"This discussion is traced back to 1948 and I say that there has never been a national consensus over the resistance, even during the liberation on May 25, 2000, when the resistance offered this victory to all the Lebanese," he said.
In parallel, Sayyed Nasrallah emphasized "the only option that was -and still is- available in front of the people of our nation, including the Lebanese people, is the resistance in all its dimensions."

"Some ignore that since 1948 the South has been attacked and they don't know anything about the massacres against people in border regions, regardless of the sects. They know nothing about the humiliating security forces and the state's institutions on the border, and the violation of the Lebanese sovereignty in the sea, airspace and land," the Resistance leader recalled.

He also affirmed "the Army-People-Resistance formula succeeded in liberating the land and protecting Lebanon," noting that "this formula turned Lebanon to a strong nation."

"The talks about the failure of the army-people-resistance equation has no dimensions and no proofs," he said, asking: "Tell us where did this equation fail and where did you succeed?"

"This resistance was launched with limited available capabilities and the people of Jabal Amel stayed in their land, were killed under the roofs of their houses. This is the resistance; a resistance by taking a stance," Sayyed Nasrallah confirmed.
In addition, he stressed: "The army-people-resistance formula succeeded in liberating the land when the entire world failed."

"The resistance succeeded in freeing prisoners in "Israeli" jails, and it cemented Lebanon as a strong nation in the regional equation. No one can ignore Lebanon, because the country had gold long before it had petrol or gas."
His Eminence also viewed any stab to the resistance or any verbal assault "as an attack to all what is related to the resistance and not only a certain group."
On the Resistance's capabilities, Sayyed Nasrallah reiterated: " The resistance is not only strong, but it is financially, militarily stronger than in 2006."

"The Resistance will remain solid to protect its homeland, people, and land and to maintain the 1996 rules of confrontation, and thanks to the power of deterrence it will continue to protect the villages," he added.
On the "Israeli" level, Sayyed Nasrallah affirmed that " the "Israeli" is fully aware of the heavy price of war, because it knows that the resistance is strong and will remain growing stronger."

To those attacking the resistance, he underscored that "gold remains gold. If someone said that gold is wooden, does that change it?"

"Lebanon's gold does not exist in the world, and the Lebanese turned the wood has into coffins for the "Israeli" soldiers," he vowed, and pointed out that " this wood will continue to confront any aggressor."Regarding the developments on the Syrian level, His Eminence stated: "The resistance will remain strong and defiant and those who say that the fighting in Syria opens the doors in front of "Israelis" to wage a war against Lebanon, we tell them that their assumptions are wrong."

"We are ready for victory," Sayyed Nasrallah emphasized, noting that Hizbullah's first presence on the Syrian arena was related to the Takfiri attacks in eastern Ghouta, near the Sayyeda Zainab Holy shrine."

"We went to defend the shrine that is respected and loved by all Muslims."

Meanwhile, His Eminence recalled that Hizbullah was the latest to interfere in Syria. "We sent a small force to defend the shrine."

"From the beginning we said we are with dialogue and reform and we are not with implementing strategic choices in Syria," he said, and wondered: "Why did Arabs wait for three years of suffering, killing and hardship before becoming convinced of a political solution?"

To them, Sayyed Nasrallah said:"You rejected to take part in dialogue and you keep seeking to topple the Syrian regime."

"Because we didn't follow your project, they turned their war on us. It is required that we all bow to the storm coming to the region, or at least to bow to them. However, we did not do it because we believe that they pose an existential threat to Syria and the resistance."

According to Sayyed Nasrallah, "We have said since the beginning that what is happening in Syria subjects the entire region to the danger of Takfiris. You said it was about human rights and revolutions. But today, you are talking about Takfiri danger, after getting involved in arming opposition groups."

However, His Eminence urged all the Lebanese sides to reconsider their stances and reevaluate what's happening. "I am not telling you to come fight with us in Syria, but to change your positions."

"Some religious sects and certain groups in Lebanon have proposed to come fight with us in Syria, but we rejected. The problem in Lebanon is that Hizbullah was late to join the Syrian war, and your problem is that you are still in your place and did not go fight," His Eminence clarified.

He also warned that " If Takfiri terrorism won in Syria, we will all come to an end. Don't you see what's happening in Aleppo, Idlib, Raqqa, Deir al-Zour, in Faluja and al-Anbar?"

"If the Takfiris were defeated in Syria, the Lebanese will be protected. This winning party is not looking for revenge but for peace and strength."

On the internal front, Sayyed Nasrallah expressed Hizbullah's readiness to cooperate to solve the security situation in the country, particularly in the North and Bekaa.