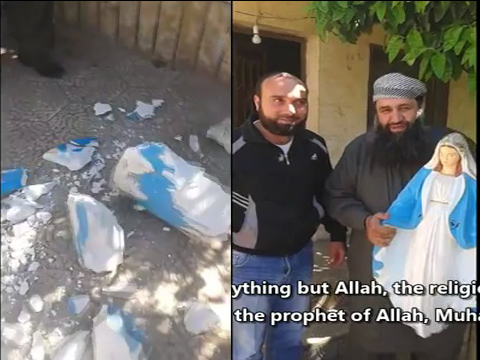 Upon arrival at a house that had the statue of virgin Mary, Wahhabi cleric, Omar Gharba' carried the statue of the Virgin Mary after it was taken over by militants from the "Islamic State in Iraq and the Levant" (ISIL) and broke it by throwing it on the ground. He stated that he and his fellow Wahhabis won't tolerate any form of worship except strict Wahhabism of Saudi Arabia.

"God willing, Only God will be worshipped in the land of the Levant," the terrorist who destroyed the statue said, noting that "no other idol will be worshiped after these days . We won't accept but the religion of Allah and the Sunnah of our Prophet Mohammed bin Abdullah . "

Also, the takfiris show in another video martyr George Elias Mashaq , 25 years old, a Syrian Christian whom they killed in Aleppo.

His necklace has beside the Christian cross , the picture of the Syrian president Bashar al-Assad and the Hizbullah leader Sayyed Hassan Nasrallah because they believe that those are the people who are trying to protect him.

Foreign fighters from across the Arab world and beyond are playing an increasingly dominant role in the battle for control of Syria, which has emerged as an even more powerful magnet for takfiri volunteers than Iraq and Afghanistan were in the past decade.

Thousands of Arabs and other non-Syrian Muslims have streamed into Syria over the past two years to join in the fight.