Austria defended on Wednesday its decision to withdraw from the UN peacekeeping force on the Occupied Golan Heights, as its last soldiers returned home ending a nearly 40-year mission. 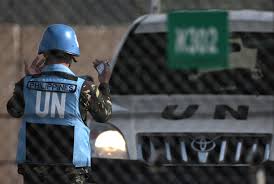 "The UN blue helmet force's impartiality is no longer undisputed by partners on the ground, and we can neither ensure the soldiers' supply nor their safety," Defense Minister Gerald Klug told the Austria Press Agency.
Klug said he had repeatedly told the UN about the poor security situation in the ceasefire zone monitored by the peacekeepers.

For its part, the Philippines said it would likely keep its 340 soldiers in the occupied Heights as part of a United Nations peacekeeping force, amid improved security for the troops.
Foreign Secretary Albert del Rosario told reporters the UN was close to fulfilling three conditions on upgrading safety set by the Philippines that would allow the Filipino soldiers to stay beyond August 11.
"The conditions look fine to me," del Rosario said, adding he had recommended to President Benigno Aquino that they stay for at least another six-month mission.
"I still have to go back to the president for his blessing but I don't think it will be a problem."

The Philippines is one of the major contributors to the UN Golan force, which has been monitoring a ceasefire between Syria and the Zionist entity since 1974.
Del Rosario said one of the three conditions set by the Philippines was that the total peacekeeping force return to its regular strength of 1,250 soldiers.
Another was extra military equipment for the soldiers, and the third was that the Philippines be able to review the mission every six months.
Del Rosario said he was confident the numbers in the peacekeeping force would climb to 1,250 by October.

Fiji has already emerged in recent months as a savior for the peacekeeping force, agreeing to deploy 562 soldiers.
Del Rosario also said the UN had committed to the extra military equipment. And he said the Philippines was allowed to review its mission every six months, rather than annually, until at least 2015.
The Philippines was due either to extend its mission, or withdraw, on August 11.