Syria's main Kurdish community issued a call to arms to battle extremists after a Kurdish leader was killed on Tuesday weeks into clashes between the minority group and al-Nusra Front militants. 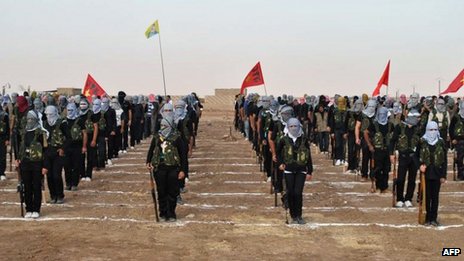 "We call on the Kurdish people... to step forward... anyone fit to bear arms should join the ranks of the Committees for the Protection of the Kurdish People [YPG] and to face the assaults of these armed groups," said a YPG statement published on a Kurdish website.

Isa Huso, a prominent Kurdish politician, was assassinated as he left his house in the city of Qamishli, a pro-Kurdish news agency reported.
That raised to new heights Kurdish resentment against the main opposition National Coalition and mainstream rebel Free Syrian Army [FSA].

"Despite our repeated calls to the National Coalition and the Free Syrian Army command... to date these parties have failed to take a clear position" against the extremists, the YPG statement said.
It said it was clear that FSA battalions were coordinating with these groups.
It singled out al-Nusra Front and the so-called "Islamic State of Iraq and the Levant" [ISIS], saying they and the FSA "have become one side in attacking the Kurdish people."

"These obscurantist groups [Al-Nusra and ISIS] are not focusing on Homs (in central Syria) or Damascus province, where there are open battles against the regime," a Kurdish official stated.

"Instead, they are assaulting areas that have fallen out of regime control and attacking the Kurds."
Clashes between extremists and Kurdish fighters have raged for some two weeks, after jihadists were expelled from the key town of Ras al-Ain on the Turkish border.