US President Barack Obama decided to appoint Samantha Power as the American ambassador to the UN. 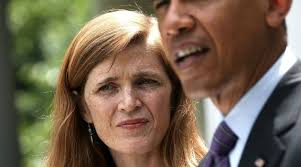 In an attempt to secure the Zionist entity's support, Power said during her Senate confirmation hearing on Wednesday: "The United States has no greater friend in the world than "Israel"."

She further pledged to combat the so-called "unacceptable bias" against "Israel" at the global body.
"Just as I have done as President Obama's UN adviser at the White House, I will stand up for "Israel" and work tirelessly to defend it," she said.

Power also promised to fight to help "Israel" obtain a nonpermanent seat on the UN Security Council.
"The Security Council seat is one that has eluded "Israel", despite its many contributions across the years, and I commit to you wholeheartedly to go on offense, as well as playing defense on the legitimation of "Israel", and we'll make every effort to secure greater integration of "Israeli" public servants in the UN system."

Speaking before Foreign Relations Committee, Power also expressed support for increasing pressure on Iran and maintaining the option of military force to deter its development of a nuclear weapons program.
""Israel"-not Iran, not Sudan, not North Korea-is the one "country" with a fixed place on the Human Rights Council's agenda. "Israel's" legitimacy should be beyond dispute, and its security must be beyond doubt," Power said in her testimony.

"There is no shortcut" to a negotiated settlement of the "Israeli"-Palestinian conflict, she told the committee. "Unilateral Palestinian statehood measures just won't work." Power said the US needs to "deter" such unilateral efforts.