The Syrian Army discovered Sunday a factory to manufacture and store the toxic chemical weapons inside a terrorists' den in the area surrounding al-Manashir roundabout in Joubar neighborhood, Damascus Countryside. 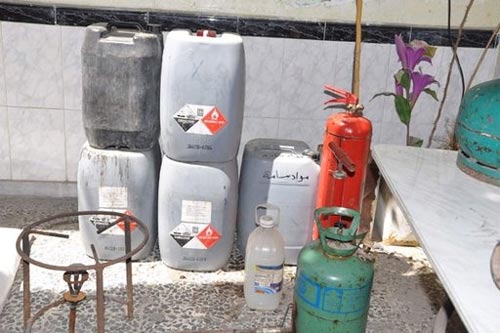 In this context, an official source clarified that "the army unit seized amounts of toxic chemical materials, in addition to seizing chlorine substances in containers, some of them foreign-made, while others Saudi-made."

The source added that the seized weapons included weapons and scores of mortar shells which were prepared to be filled with chemical materials.

Meanwhile, the army continued targeting the armed groups' hideouts in several neighborhoods in Homs and its countryside, inflicting heavy losses upon them.
In this context, the army units repelled an attempted attack on the village of Felleh in al-Houleh area, inflicting heavy losses upon the terrorists who had been firing shells on the village.
In Deir Ezzor, in a qualitative operation, a unit of the army destroyed al-Nusra Front militants in Kabajib village on Deir Ezzor-Damascus highway.

SANA reporter quoted a source in the province as saying that the operation resulted in the killing and injury of a number of terrorists.
In Damascus countryside, the army units continued their operations against the armed groups' concentrations.

A Syrian military commander said the army has recaptured 60 percent of Jobar, south of Qaboun, and were trying to retake the rest. The commander talked to reporters Sunday during a military escorted tour of Jobar organized by the Information Ministry.
"The army is advancing rapidly in Jobar. ... the area will be secured in the next few days according to a well-studied plan," the commander said, declining to be named in line with regulations.


Jobar is near the road linking Damascus with its eastern suburbs known as Eastern Ghouta. Rebels have been using the road to transport weapons and other supplies to the capital.
The commander said the Jobar-Qaboun axis was important to "cleanse Ghouta from terrorist groups."