Yarmouk Palestinian refugee camp in Damascus witnessed on Monday morning unprecedented migration traffic after the so-called Free Syrian Army and its armed terrorist allies broke into the camp in its military conflict with the Arab Syrian Army. 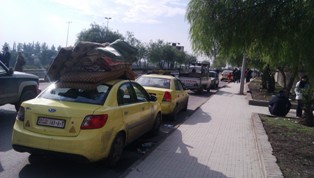 Yarmouk, accounted as one of the largest Palestinian refugee population areas in Syria, was subject to so-called FSA militant hideaways. The so-called FSA had suffered major strategic losses in the camp's neighboring areas, such as "Hajar al-Aswad", "al-Tadamon", and "al-Takaddom" neighborhoods, during clashes with Syrian Army units in Damascus's countryside. When these armed groups failed in their goal, they resorted to dragging the Yarmouk camp to the frontline against the Syrian forces.

The camp's inhabitants refused to comply with the FSA's goal, which led to clashes between FSA militants and the camp's factions led by The Popular Front for the Liberation of Palestine - General Command. FSA militants had launched mortars on the camp in an attempt to break into it.

On this note, sources in the Palestinian Popular Committee told al-Ahed News website that the areas targeted in Yarmouk had a "dense population, and harbored Palestinian refugees and Syrian migrants, which caused tens of civilian casualties."
Al-Ahed News Website closely observed the dense migration traffic, where many camp inhabitants expressed frustration of the so-called FSA break in and mortar fire. 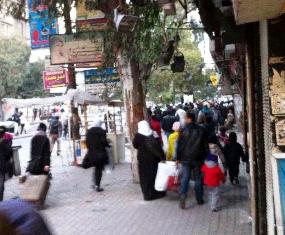 "The camp was safe and received tens of thousands of Syrian migrants, but the [so-called] FSA made it an unbearable hell," Em Mohammad (Mother of Mohammad) said.

For his part, Ahmad al-Jaradat from Yarmouk saw that "my migration along with
thousands of Palestinian refugees' from Yarmouk camp were caused by militiamen breaking into the camp and assaulting the popular committee checkpoints who in turn returned fire."

Moreover, hundreds of Yarmouk residents headed on Tuesday morning to The United Nations Relief and Works Agency for Palestine Refugees in the Near East (UNRWA) in Damascus, who in turn provided sanctuaries in mosques and the agency's schools in Khan al-Sheh and Jarmana, Damascus.
Furthermore, the Popular Front - General Command clarified that, "The Front was compelled to release several statements accentuating no secession in their lines and their complete control over the Popular Front building."

The Front further reiterated that the armed groups "intensified their attacks in the last ten days, which led to tens of martyrs and injuries."